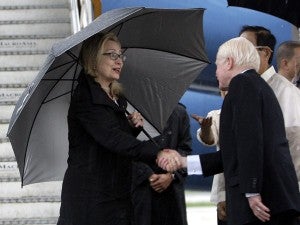 US Secretary of State Hillary Rodham Clinton holding her umbrella is welcomed by Philippine Ambassador to the US Jose Cuisia Jr. upon arrival Tuesday, Nov. 15, 2011 in Manila. AP PHOTO/PAT ROQUE

MANILA, Philippines—US Secretary of State Hillary Clinton arrived in Manila Tuesday afternoon as part of a high-profile Asia-Pacific tour that began with the APEC Forum in Hawaii.

Clinton arrived at 4:30 p.m. on board a chartered US plane that docked at the AGES hangar in the so-called Balagbag area inside the NAIA compound.

She was welcomed by Philippine government and Embassy officials. Among them were Philippine Ambassador to the United States Jose L. Cuisia Jr. and US Ambassador Harry Thomas.

A joint security force from the US Secret Service and the Philippine National Police Aviation Security Group provided plane-side security for the visiting dignitary.

Airport security officials also augmented the efforts and covered the land-side area of the airport complex.

Clad in a black suit and holding an umbrella, Clinton waved briefly at the members of the media covering her arrival before she boarded a black car awaiting for her.

Her convoy left the airport around 4:45 p.m.

From the airport, Clinton would proceed to an undisclosed location.

According to Cuisia, Clinton’s visit is significant as it is meant to strengthen ties between the US and the countries in the Asia Pacific region.

Clinton’s overnight visit includes activities to commemorate the 60th anniversary of the signing of the US-Philippine Mutual Defense Treaty and to launch the Partnership for Growth (PFG) in the country.

During her visit, she will meet with Foreign Affairs Secretary Albert del Rosario and Defense Secretary Voltaire Gazmin to discuss new ways of stepping up US-Philippine alliance to a  higher level in 2012.

From Manila, she will move on to flood-stricken Bangkok before attending the East Asia Summit in Bali, Indonesia.