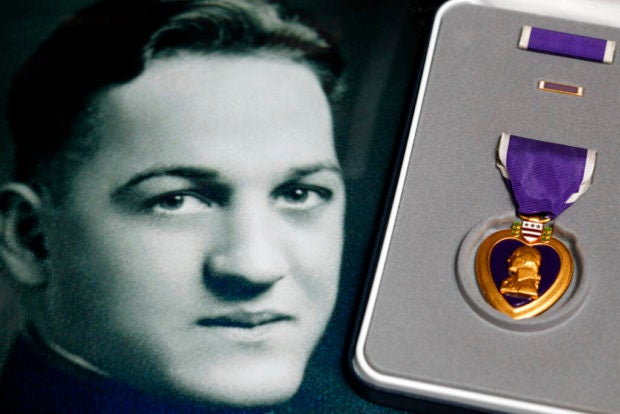 A portrait of Coast Guard Lt. Thomas J.E. Crotty next to a Purple Heart medal, one of several medals presented posthumously in Buffalo, New York.  (AP)

BUFFALO, New York  — Lt. Thomas J.E. Crotty’s capture during World War II made him the first Coast Guard prisoner of war since the War of 1812.

With his burial in his hometown of Buffalo this weekend, he may end up being the last of the Coast Guard’s missing service members to be repatriated, a Coast Guard historian said.

That’s because most missing Coast Guard casualties are lost at sea, but Crotty “was lost on land, and as a result of that he will be coming home,” William Thiesen, Atlantic area historian, said.

Crotty’s remains were identified in September, 77 years after his death at a Japanese POW camp following the American surrender in the Philippines. They arrived at the Niagara Falls Air Reserve Station on Friday morning. A service and burial are planned for Saturday in Buffalo.

“It’s been a 77-year mission to do this. Our family has always kept his memory alive,” said nephew Patrick Crotty, part of a large extended family that still lives in the area.

Crotty, who was known as Jimmy, was assigned to the Navy’s Pacific fleet three months before the Japanese attacked Pearl Harbor on Dec. 7, 1941. An ordnance specialist who had trained with the Navy, he was serving with an underwater mine removal unit in Manila Bay when the Japanese invaded the Philippines.

He became the only active duty Coast Guardsman to join Army and Marine infantrymen in defending Bataan and the island of Corregidor, said Thiesen, who described Crotty as “uniquely important” to the Coast Guard. With Corregidor’s surrender, the 30-year-old officer was among some 15,000 American and Filipino troops taken captive on May 6, 1942.

Two months later, Crotty died during an outbreak of diphtheria at a POW camp at Cabanatuan. He was buried in a mass grave outside the prison. More than 2,500 POWs died at the camp during the war, according to the Defense Department.

Following the war, the American Graves Registration Service exhumed those buried at the Cabanatuan Camp Cemetery and tried to identify them, but because of the commingling of the remains and limited technology of the time many of the remains went unidentified, officials said.

The “unknowns” were interred in the present-day Manila American Cemetery and Memorial, where Crotty’s name was recorded on the cemetery’s Walls of the Missing.

In January 2018, some of the remains were again disinterred and analyzed. This time, Crotty was identified through dental and anthropological analysis and DNA matched to samples provided by great-nieces and great-nephews.

Before his remains were identified, Crotty was posthumously awarded the Bronze Star, Purple Heart, Prisoner of War Medal and the Philippines Defense Medal. More than three dozen relatives attended a 2010 ceremony in Buffalo that a great-nephew, Michael Kelly, had set in motion with a call to Coast Guard officials the year before. A marker went up in Arlington National Cemetery in 2017.

“Like so many Coast Guard men and women, their stories are either untold or forgotten,” Thiesen said. “Most people don’t know that the Coast Guard has fought in every major conflict in U.S. history, let alone that there are POWs and MIAs.”

Gov. Andrew Cuomo directed that flags on all state government buildings be flown at half-staff on Saturday “to honor Lt. Crotty and his legacy as he is finally and rightfully returned home to Buffalo.”

Crotty was the youngest of five boys and a girl born to Irish immigrants Patrick and Helen Crotty in Buffalo. A natural leader, according to his family, he was a senior at South Park High School when he managed and coached the American Legion junior baseball team to win the Legion’s national championship. At the U.S. Coast Guard Academy, he was the class president, a company commander and captain of the football team.