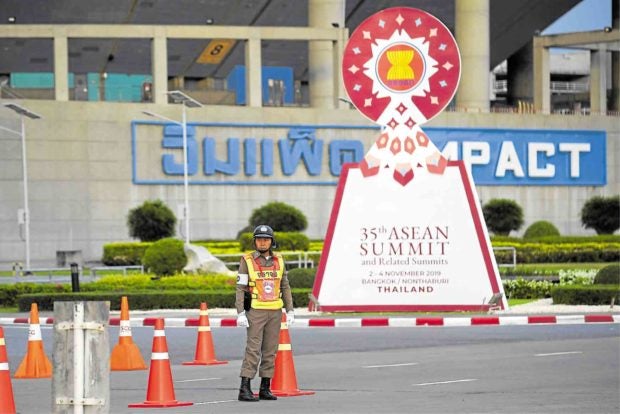 READY FOR SUMMIT A policeman stands guard outside the venue of the 35th Association of Southeast Asian Nations summit in Bangkok. —AFP

NONTHABURI, THAILAND—President Duterte arrived in Bangkok on Friday night to join the 35th Association of Southeast Asian Nations (Asean) Summit, which Philippine diplomats were expecting to again tackle the still-unresolved code of conduct on the disputed South China Sea.

Assistant Foreign Secretary Junever Mahilum-West earlier said the code of conduct would be an “unavoidable” issue during the three-day summit and related conferences to be held in Bangkok and in this city north of the Thai capital.

Philippine Ambassador to Thailand Mary Jo Bernardo-Aragon said in an interview, “I believe it is to the interest of Asean that we look forward to an early conclusion.”

Aragon noted some progress in the talks concerning the code, which seeks to define rules on how nations with competing claims over the South China Sea—including Vietnam, Philippines, Malaysia, Brunei, and China—should conduct themselves.

In 2016, the Philippines won its claim before a United Nations-backed arbitral court over its exclusive economic zone being occupied in part by China.

But the court resolution has not resolved the Philippines’ maritime dispute with China, underscored anew by the sinking of a Filipino fishing boat by a Chinese trawler near Recto Bank in June.

The incident marred the Philippines’ attempt since 2016 to foster its ties with China and to play an active role in the talks over the proposed code of conduct. The Philippines has been appointed Asean coordinator of the talks.

The code aims to avert such incidents but has remained under discussion since 2017, when the Philippines hosted Asean’s annual summit.

Intractable differences have stymied efforts by Asean to reach an accord with China on the disputed waters.

But according to Aragon, “There are continuing talks for an early conclusion.”

US President Donald Trump is skipping the summit in a palpable absence that could be viewed in the region as a snub.

He will instead be represented by National Security Adviser Robert O’Brien and Commerce Secretary Wilbur Ross.

Manila-based analyst Richard Heydarian said Trump’s absence, due to troubles at home, plays into concerns over American commitment to the region amid a trade war between the United States and China.

Despite Trump’s absence, there are hopes on progress toward easing the trade tensions.

The bloc will also hold its Asean Plus Three summit with Japan, South Korea and China, as well as the East Asia Summit, and the talks for a proposed free trade under the Regional Comprehensive Economic Partnership (RCEP) among Asean, China and other economies in the Pacific region.

The third RCEP summit will be held on Monday, the last day of the Asean gathering. Mr. Duterte is expected to attend these forums as well.

Following recent health issues hounding the President, his spokesperson, Salvador Panelo maintained that he was in good shape but would be attending the Asean talks with some “spacing” in these activities.

Executive Secretary Salvador Medialdea is officer in charge of the government in the absence of Mr. Duterte, who is expected to return home on Monday after the summit. —WITH A REPORT FROM AP