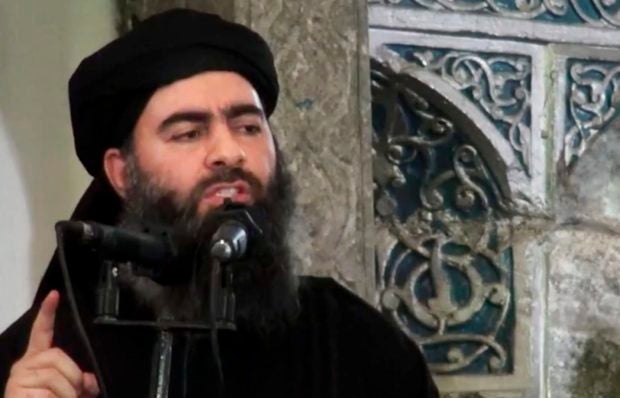 This file image made from video posted on a militant website Saturday, July 5, 2014, purports to show the leader of the Islamic State group, Abu Bakr al-Baghdadi, delivering a sermon at a mosque in Iraq during his first public appearance. AP

MANILA, Philippines — While the death of Islamic State founder and leader Abu Bakr al-Baghdadi is a major development in the fight against extremism, his death would only serve as a “temporary setback” to terrorism, Defense Secretary Delfin Lorenzana said Monday.

Abu Bakr al-Baghdadi, the shadowy leader of the Islamic State (IS) group who presided over its global jihad and became arguably the world’s most wanted man, is believed dead after being targeted by a U.S. military raid in Syria.

Al-Baghdadi has led IS for the last five years, presiding over its ascendancy as it cultivated a reputation for beheadings and attracted hundreds of thousands of followers to a sprawling and self-styled caliphate in Iraq and Syria.

He remained among the few IS commanders still at large despite multiple claims in recent years about his death and even as his so-called caliphate dramatically shrank, with many supporters who joined the cause either imprisoned or jailed.

Though at minimum a symbolic victory for Western counterterrorism efforts, his death would have unknown practical impact on possible future attacks.

He had been largely regarded as a symbolic figurehead of the global terror network, and was described as “irrelevant for a long time” by a coalition spokesman in 2017.

In the Philippines, a few local militant groups have pledged allegiance to the Islamic State.

The five-month siege in Marawi City in 2017, the longest urban war that the Philippines had faced in recent years, was carried out by ISIS-affiliated militants.

The emergence of suicide bombings in the southern Philippines in the past year are attributed by security experts to the influence of Islamic State in Southeast Asia.

The Armed Forces of the Philippines remains on high alert following the death of Baghdadi to thwart possible attempts to ride on this development, AFP spokesperson Brig. Gen. Edgard Arevalo said in a statement.

But the senior official said it is unlikely that the ISIS-inspired local terrorist groups would launch sympathy attacks.

“If they are to conduct any terrorist atrocity, it will not be for that reason. But we are ready to combat any eventuality,” he said.

Baghdadi’s death, he said, would “definitely impact on local terrorist groups but not to the point of its demise.”  With reports from AP

Read Next
South China Sea Code of Conduct talks likely in Asean Summit – DFA official
EDITORS' PICK
Pagasa: Warm, sunny Sunday in most parts of PH
Is it safe to talk politics again at family gatherings? ‘The Reconciliation Dinner’ shows us what that’s like
House energy committee chair Arroyo bats for cheap electricity
EDITORIAL: To a bike-friendly future
The Best Tech Gifts For The 2022 Holidays
vivo’s coming to town to grant wishes with more holiday promos
MOST READ
LOOK: Vhong Navarro transferred to BJMP detention facility in Taguig
The Elephant Man in the Senate
Posh village as ‘shabu’ haven
LOOK: Zanjoe Marudo bonds with Ria Atayde, her family
Don't miss out on the latest news and information.