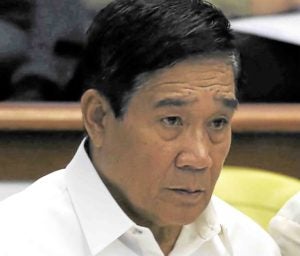 After recommending the filing of several protests against China’s incursions in Philippine waters, National Security Adviser Hermogenes Esperon Jr. on Friday admitted that he was not satisfied with Beijing’s response to some of the diplomatic notes.

At a press briefing in Malacañang on Friday, Esperon said he “recommended the filing of diplomatic action” on 39 Chinese incursions or intrusions.

“I would rather that I leave that to the Department of Foreign Affairs as the details are there. But I am satisfied with some; not with some because I recommend for diplomatic action when there are swarming in our islands,” he said.

Esperon cited one instance on Feb. 8 this year when around 60 Chinese vessels were spotted at the Sandy Cay sandbar near the country’s Pag-asa Island. The number of Chinese vessels went up to 113 in July, he said.

Esperon noted that the fishing vessels would sometimes “decrease their deployments there.”

“I am not even sure if it’s because of the weather condition, but truth to tell … we simply have to develop yet our own capabilities to enforce fisheries laws,” he said.

He noted that Chinese fishermen end up getting more resources from the area than Filipino fishermen when they are swarming these areas.

“When they are swarming, they also blocked the entry of our own fishermen. So, we think that there should be some arrangements within,” Esperon said

He said he was referring to areas or maritime features near islands claimed by Manila, most of which were within the country’s 370-kilometer exclusive economic zone where “we have sovereign rights.”

According to Esperon, the situation becomes disadvantageous to Filipinos when there are too many Chinese fishing boats, hence Manila’s resort to diplomatic action.

“The Fiery Cross feature has now a three-kilometer airstrip as well as Mischief and Subi reef. There are big ports there. You would imagine there are warships there but mostly there would be Coast Guard and fishing vessels,” Esperon said.

The national security adviser said the Philippines has also filed diplomatic protests regarding the passage of Chinese vessels through Philippine waters without coordinating with the government.

“Diplomatic action need not be verbal nor written. It could be a combination of both. We are, in short, managing the area,” said Esperon, who chairs the national task force on the West Philippine Sea.

He said, however, that the maritime dispute between the Philippines and China was still “manageable” and the two countries have diplomatic means of resolving it.

“The elements of power of state would involve diplomacy, economic, military, as well as legal and intelligence, informational. We could use all of those but we are talking here of diplomacy. We don’t even discuss here deploying our military but we can,” Esperon said.

He noted that Manila and Beijing have bilateral consultative mechanisms, referring to what he called were embassy-to-embassy, government-to-embassy and leader-to-leader contacts.

Esperon said the long-sought code of conduct in the South China Sea was being discussed by China and members of the Association of Southeast Asian Nations.

“So what’s our choice for now? It’s diplomacy, economic and informational,” he said, adding: “Remember that our relations with China does not start and end with the West Philippine Sea or the South China Sea.”