DFA: No Filipino affected amid protests in Chile | Global News

DFA: No Filipino affected amid protests in Chile 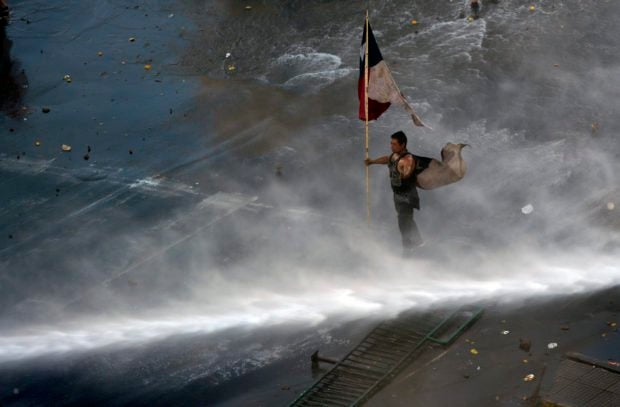 Holding a Chilean flag, a protester braces against a water cannon sprayed from a police truck amid a march by students and union members in Santiago, Chile, Monday, Oct. 21, 2019. Protesters defied an emergency decree and confronted police in Chile’s capital on Monday, continuing disturbances that have left at least 11 dead and led the president to say the country is “at war.” (AP Photo/Miguel Arenas)

MANILA, Philippines — No Filipino has been reported affected by the ongoing violent protests in Chile, the Department of Foreign Affairs (DFA) said Wednesday.

DFA, nevertheless, renewed its call for Filipinos there to take caution and stay indoors if possible, as well as avoid traveling to areas where protests are being held, particularly in central Santiago and places around Chile’s sub metro and bus stations.

There are approximately 800 OFWs in Chile, with the majority residing in the country’s capital, DFA said.

“[DFA] reiterates the advisory issued by the Philippine Embassy in Santiago for Filipinos in Chile to take necessary precautions in view of the declaration of a State of Emergency in Grand Santiago on 19 October 2019, which has since been extended to Chucabuco, Puente Alto, San Bernardo, Concepcion, Valparaiso, Iquique, Maipu, and other provinces,” the foreign affairs department said in an advisory.

DFA said Filipinos who need assistance may contact the Embassy at +56-94-272-0320. DFA assured that it constantly monitors the situation in the South American nation.

An Associated Press report said that death toll from the protests has reached 15.