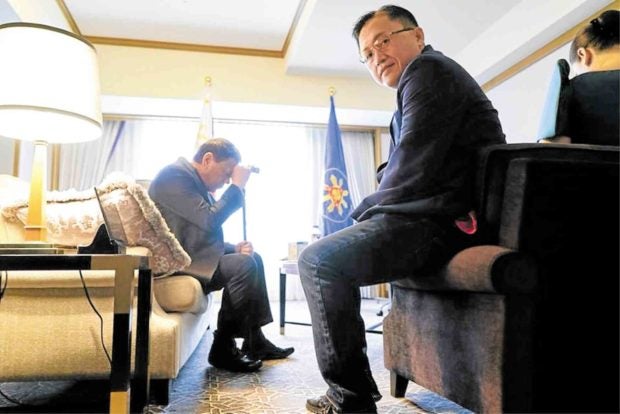 PRIVATE MOMENT President Duterte and Sen. Bong Go, a longtime aide, cool their heels at a hotel in Tokyo, Japan, ahead of Emperor Naruhito’s ascension to the Chrysanthemum Throne on Tuesday. —PHOTO FROM BONG GO’S FACEBOOK

MANILA, Philippines — President Rodrigo Duterte was forced on Tuesday to cut short his visit to Japan for the enthronement of Emperor Naruhito due to what Malacañang said was “unbearable pain” in his lower back after a motorcycle accident last week.

Presidential spokesperson Salvador Panelo said the President decided to return home two days earlier so he could see a doctor.

“The President will cut short his trip to Japan due to unbearable pain in his spinal column near the pelvic bone as a consequence of his fall during his motorcycle ride last Thursday, Oct. 17,” Panelo said in a statement.

He said the President would be arriving late Tuesday and would see his neurologist on Wednesday.

“Good evening, my countrymen, fellow Filipinos. You know, about four days ago, I took a spill from my motorcycle. When you ride motorcycles, maybe once or twice in your life, you will really take a fall,” he said.

The President tried to make light of his accident, but admitted that he could no longer bear the pain in his hip. He grimaced in pain before the video was cut short.

“All motorcycle riders fall off. Like my accident. But the thing is I could no longer bear the pain in the belt area, around three inches. It is really painful. I was just brushing my teeth after waking up and eating. It’s really…,” the President said, groaning in apparent pain.

“Apologies, the video was cut short. To our fellow Filipinos, please do not worry. Our beloved President is in good condition,” he said.

He then panned the camera toward the President, who was seen leafing through pages of what looked like models of go-karts.

The health of the President, 74, and his absences from the public spotlight are often the subject of fervent speculation, and the source of complaints from critics that his administration is not forthcoming about the extent of his ailments.

The President had a minor fall from a motorcycle at the Presidential Security Group compound on Thursday, causing hip pain, light bruises and scratches on his elbow and knee.

He used a walking stick in Tokyo on Tuesday during the ceremony for Emperor Naruhito’s ascension to the throne, but decided to skip a banquet to return home and see his neurologist, Panelo said.

“The public can rest assured that there is nothing to worry as regards the physical health and condition of the President as he gives serious priority thereto in actively serving our country,” he added.

It was the third time this month that the government has tried to ease concerns about the President’s health after the President told the Filipino community in Moscow that the frequent drooping of one eyelid was due to a chronic neuromuscular disorder.

The President’s known problems include back pain, migraines from nerve damage after a previous motorcycle accident, and Barrett’s esophagus, affecting his throat.

His circulation is impacted by Buerger’s disease, from heavy smoking when he was younger. He said last year that he had tested negative for cancer.

Whenever the President is missing for a long stretch and amid rumors about his deteriorating health, Go, his former longtime aide, posts on social media what appear to be proof-of-life images of the President relaxing at home, often with the day’s newspaper in the shot.

On Tuesday, Go posted photos of himself, the President and Davao City Mayor Sara Duterte at a hotel in Tokyo, preparing for the enthronement ceremony.

Panelo said the President was able to attend the ceremony, although “carrying a cane to assist him in his walk.”

Malacañang also released a statement on Naruhito’s ascension to the throne, sharing the Japanese people’s joy at having a new emperor and conveying the Philippines’ “warm wishes” for the new Reiwa era in Japan.

Despite his injuries from the motorcycle fall, the President attended a business conference at the Manila Hotel on Thursday, walking with a slight limp.

He showed his injuries to Trade Secretary Ramon Lopez while they were on the stage.

The two leaders sat down for a bilateral meeting and oversaw the signing of four agreements between the Philippines and India.

The President also hosted a banquet in honor of the Indian president. —With reports from the wires