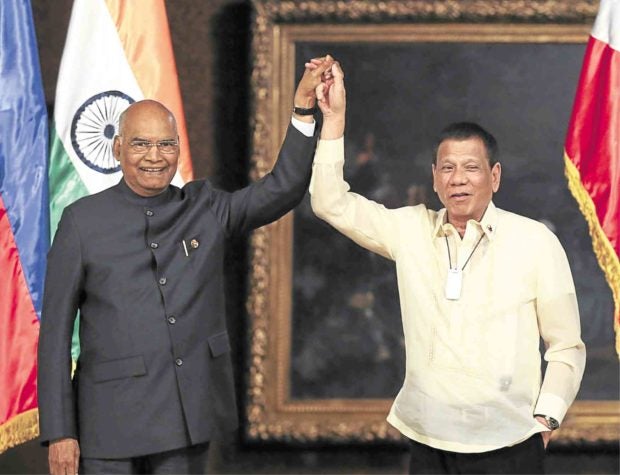 FOR MORE COOPERATION Indian President Ram Nath Kovind and President Duterte pose during the exchange of agreements at Malacañang Palace on Friday. Kovind is in Manila for a five-day state visit to mark the 70th anniversary of India-Philippines diplomatic relations.—JOAN BONDOC

MANILA, Philippines — The Philippines and India have agreed to boost their cooperation in maritime security and defense modernization, as well as fighting terrorism, violent extremism and other threats.

The Chief Executive also thanked India for its contributions to the Philippines’ defense modernization during the courtesy call of Kovind in Malacañang on Friday afternoon.

“I welcomed India’s role in the defense capability upgrade program against the backdrop of our growing security cooperation,” Mr. Duterte said.

Kovind agreed with him, saying India will participate in the Philippines’ defense modernization and infrastructure development.

“India is also keen to participate in infrastructure development as well as in defense modernization of the Philippines. In both these areas, Indian companies have made their mark and attend global reputation,” he said in his own statement.

Kovind marked the second day of his five-day state visit to the Philippines with a courtesy call and a bilateral meeting with Mr. Duterte. He is scheduled to unveil a bust of Mahatma Gandhi during his stay here.

Following the bilateral talks, the two leaders witnessed the exchange of four agreements signed between Indian and Philippine officials.

These include a memorandum of understanding (MOU) between the Department of Tourism and India’s Ministry of Tourism on tourism cooperation; a program of cooperation for 2019 to 2022 between the Department of Science and Technology and its Indian counterpart; an MOU between the Philippine Coast Guard and the Indian Navy on improving maritime security through sharing of information on nonmilitary and nongovernment shipping vessels; and a cultural exchange program between India and the Philippines from 2019 to 2023.

In his statement after the bilateral meeting, Mr. Duterte recognized the need to boost economic ties with India through improved trade and investment exchanges.

“The Philippines and India are at the front—forefront of the global IT and BPO industries. This is a shared distinction that encourages us to cooperate more so that we can complement each other’s strengths,” he said.

He also thanked India for helping rebuild Marawi City following the 2017 siege that leveled the city, “without precondition, delay or hesitation.”

Read Next
Carpio to continue defending PH claims in disputed sea even after retirement
EDITORS' PICK
Two more sites at Robinsons Malls for temporary offsite passport services
Holidays made best with Acer’s ‘Holidays at Home’ raffle promo
DOH checking if 3 COVID cases due to Omicron
Smart offers wireless fiber-like speeds to Filipino homes with country’s first 5G Prepaid Home WiFi
PH falls short of target of 3-day nat’l vax drive by 1M jabs
Gov’t fine-tunes alert level system
MOST READ
Isko’s messaging takes a turn as he commends Duterte
Pharmally’s Twinkle Dargani in tears when asked about missing documents
DOH checking if 3 COVID cases due to Omicron
Gordon to Duterte: ‘How dare you ask for Filipinos’ vote when you failed them?’
Don't miss out on the latest news and information.