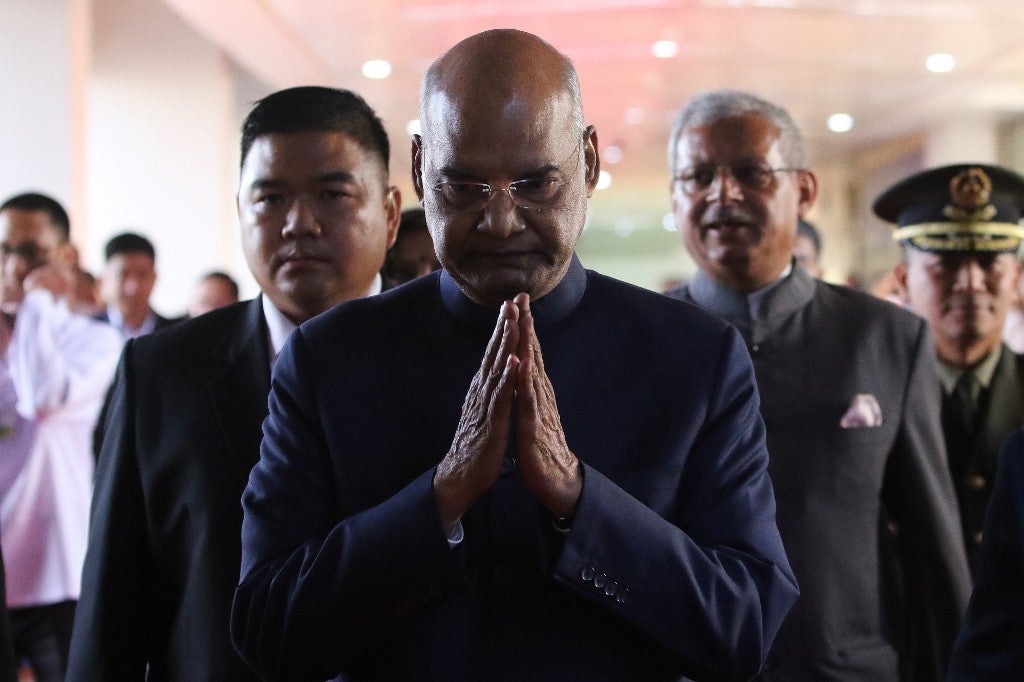 Indian President Ram Nath Kovind gestures shortly after arriving at the international airport in Manila on October 17, 2019, for a five-day state visit. (Photo by STR / AFP)

He was accompanied by his wife, first lady Savita Kovind.

The 74-year-old Indian head of state arrived on an Air India chartered flight around 4:19 p.m. at Naia Terminal 1. He was met by Philippine government officials led by Health Secretary Francisco Duque III, as well as Indian Ambassador Jaideep Mazumdar.

According to the Department of Foreign Affairs, Kovind will meet with President Duterte on Friday for bilateral talks on a range of areas of mutual interest.

India and the Philippines this year mark the 70th anniversary of the establishment of diplomatic relations.

Kovind will also meet with members of the Indian community as well as Filipino beneficiaries of the Makati City-based Mahaveer Philippine Foundation Inc., a nongovernment organization that helps provide free prosthetic limbs developed in India—known as the Jaipur foot—to amputees.

Kovind was elected President in July 2017.  He was the candidate of the Bharatiya Janata Party, the leading party in India’s ruling coalition government.

Prior to his election as president, Kovind was the governor of India’s Bihar state.  He was a member of the Rajya Sabha, India’s Upper House of Parliament, and also served as government lawyer in the Indian Supreme Court and the Delhi High Court.

India’s president is the ceremonial head of state and commander in chief of the armed forces. The prime minister, Narendra Modi, is the head of government.

The president of India is indirectly elected by an electoral college composed of the elected members of the two houses of Parliament and of the legislatures of India’s states and union territories.