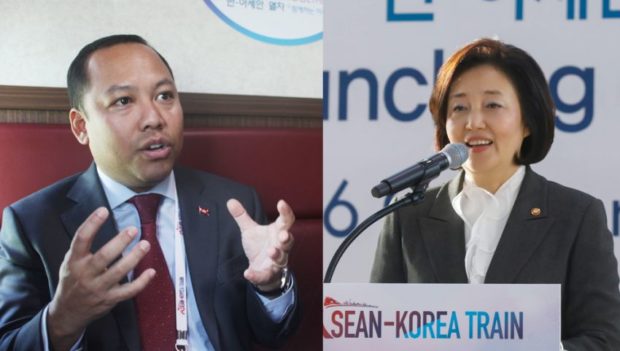 PHNOM PENH — The Asean-Korea Centre, the South Korean government body tasked with promoting economic and cultural cooperation between Asean member states and South Korea, organized a three-day trip on Wednesday for 200 Asean delegates that is intended to strengthen cooperation.

Cambodian Ambassador to South Korea Long Dimanche also said a free trade agreement (FTA) between the two nations may soon be on the cards.

Under the theme Asean-Korea Train: Advancing Together, the Asean delegate’s trip started in the South Korean capital, Seoul, and will proceed to four other major cities Gyeongju, Busan, Suncheon, and Gwangju.

The trip is intended to compliment the upcoming Asean-RoK Commemorative Summit, which is to be held in Busan from November 25-27 and attended by Prime Minister Hun Sen and the nine other Asean leaders.

South Korean Minister of SMEs and Startups Park Young-sun said: “At the center of the Asean-Korea partnership lays our small- and medium-sized enterprises [SMEs]. The Ministry is seeking to expand partnerships with Asean member states, particularly in the field of start-ups.

“We also support South Korean SMEs in expanding their businesses to the Asean region with Korean Wave content like K-Pop.

“With the Asean-RoK Commemorative Summit only one month away, the Asean-Korea Train will certainly generate a positive momentum leading to the special event in Busan next month.”

Dimanche, who was present on the Asean delegates’ trip, said South Korea was a major partner of Cambodia’s in international politics, trade and economics, culture and tourism.

“The support of South Korea towards Cambodia, and vice versa, is a crucial point that both sides want. South Korea wants Cambodia to support its regional and international politics, and we also want support from them for our political interests,” he said.

Dimanche said trade volume between the countries had reached $1 billion, but Cambodian exports to South Korea only accounted for 30 per cent of that.

He said Cambodia hoped to increase the overall trade volume, doing so in part by exporting more agricultural products to South Korea in the future.

Dimanche continued that a feasibility study on a potential FTA between the countries will begin soon, with Cambodia also focused on increasing the number of South Korean tourists visiting the Kingdom.

“We are trying to improve our tourism policy, so we can be more than just a cultural tourism destination in which visitors go only to the Angkor temples.

“We are looking to create more initiatives to attract more South Korean tourists,” Dimanche said, adding that eco-tourism and improving coastal areas were options under consideration.

Angkor Wat remains the number one destination for South Korean tourists in the Kingdom.

However, the number of South Koreans visiting the Kingdom saw a small decrease last year due to global trends and strong competition for visitors from neighboring countries, most notably Vietnam.