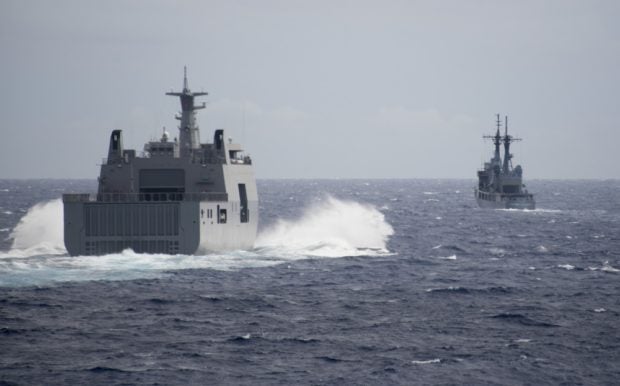 MANILA, Philippines — Japan’s navy will participate for the first time in the joint maritime exercises of the Philippines and the United States near the West Philippine Sea.

Palawan is an island province in the Philippines closest to the disputed Spratly Islands in the West Philippine Sea (South China Sea). The resource-rich waterway is being claimed mostly by China, which has built massive military outposts in recent years to strengthen its claims.

The MTA-Sama Sama (formerly called CARAT exercise) will consist of both shore-based and at-sea activities designed to allow participating navies to undertake complex maritime training utilizing diverse naval platforms and operating areas, the US Pacific Fleet said in a statement.

It will mark the first time that the Japan Maritime Self-Defense Force will actually participate in the drills. Last year, they joined the Sama-Sama as observers during the training exercises.

“Any time we can execute realistic, combined scenarios with our partners, it goes a long to make us better and more effective together,” said Capt. Ann McCann, deputy commodore of Destroyer Squadron 7.

The US Navy will use some of its assets including littoral combat ship USS Montgomery, the Whidbey Island-class dock landing ship USS Germantown, the Spearhead-class expeditionary fast transport USNS Millinocket, the Safeguard-class salvage ship USNS Salvor, and a P-8A Poseidon aircraft.

The US Coast Guard cutter USCG Stratton will also join the drills, marking the first known deployment of the US Coast Guard ship in Philippine waters after the departure of USCG Bertholf in the Western Pacific.

“This activity is expected to validate the decades of friendship, partnership and cooperative engagement that had been established and longtime observed between the Philippines and United States,” the Naval Forces West said in a statement.

Over the weekend, Japanese forces joined the amphibious exercises of Philippine and US marines in Ternate, Cavite as part of the ongoing Kamandag exercises.

The exercises are being held amid new tensions between the Manila and Beijing over the South China Sea.

The Philippines early this month filed a diplomatic protest against China after Chinese coast ships were spotted near Ayungin (Second Thomas) Shoal in the West Philippine Sea, where the Philippine Navy has grounded a ship to serve as its detachment.