Trump phone call to Duterte among many that ‘horrified’ White House staff, says US paper 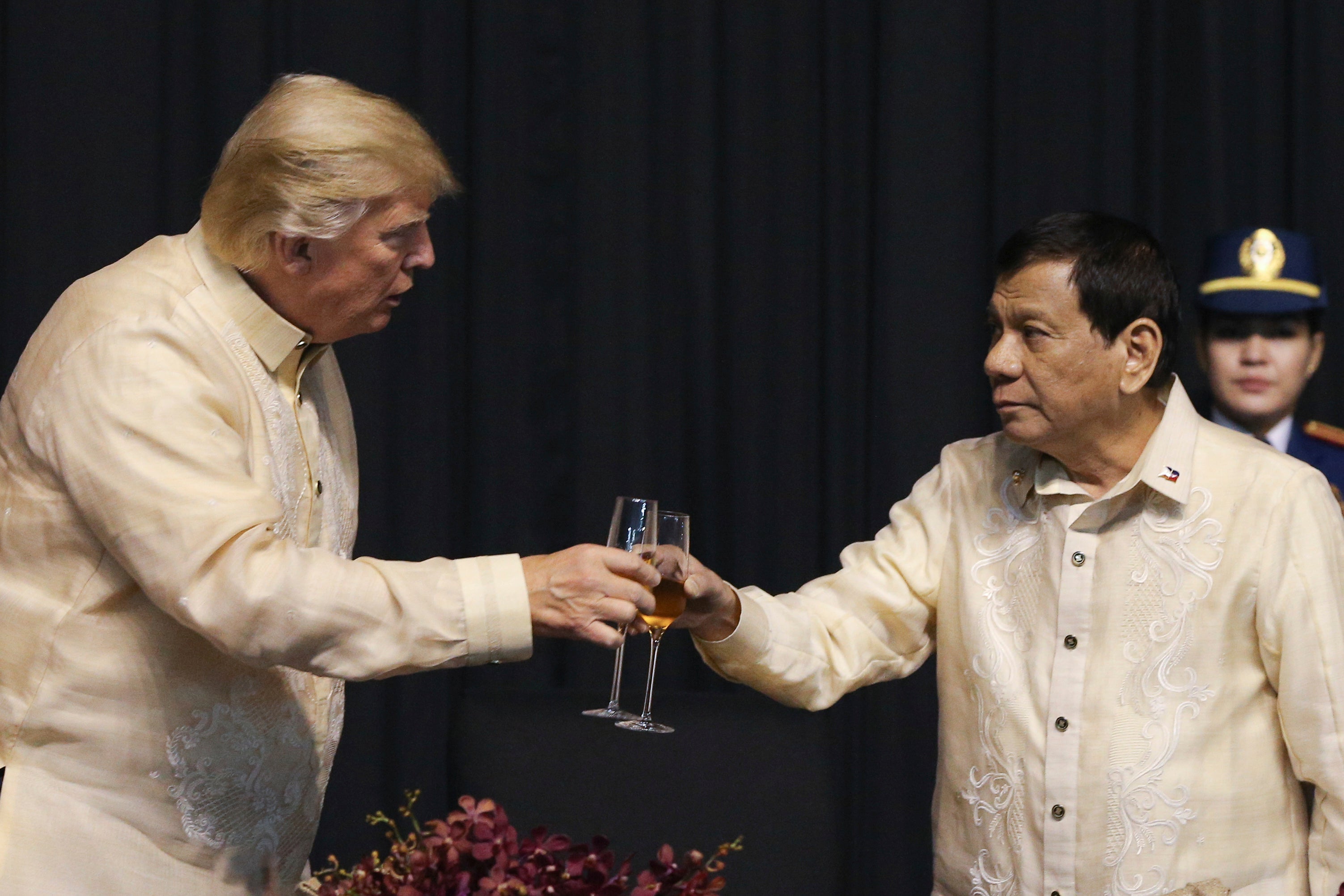 MANILA, Philippines — US President Donald Trump’s phone call to Philippines President Rodrigo Duterte in April 2017 congratulating Duterte for an “unbelievable job on the drug problem” was one of Trump’s many phone calls with world leaders that “genuinely horrified” White House staff, according to a report of the Washington Post.

Duterte and Trump had heaped praises on each other with Trump, according to reports quoting Foreign Affairs Secretary Teodoro Locsin Jr., describing Duterte as “Frank Sinatra” after Duterte sang for Trump at an event during the Philippines’ hosting of the Asean summit in 2017.

Citing anonymous White House sources, Washington Post said the call to Duterte was just one of many that Trump made to world leaders who are either outright authoritarian or display authoritarian tendencies and which were so outrageous and bordered on sellout.

Some of the calls, the WaPo report said, were simply pandering by Trump to the foreign leader he was talking to. One example cited was when he discussed a chocolate cake with Xi.

Another call by Trump, to Japanese Prime Minister Shinzo Abe, was goaded by what his critics said was his narcissism. Trump, the WaPo report quoted one of its sources as saying, “pestered” Abe “for help in recommending him for a Nobel Prize.”

Trump’s pandering to Duterte was just one of many instances of what could be the two leaders’ affirmation of their many similarities which Philippine government officials appeared to flaunt as a badge of honor for Duterte.

Salvador Panelo, Duterte spokesperson, said in a Sept. 27, 2019 report that Trump had shown that he “loved” Duterte and that Duterte loved the US president in return. But Panelo, the same report said, pointed out that Duterte was the original. “Long before Trump, there was already a Duterte,” Panelo said in that report, referring to the two presidents’ leadership styles.

Trump congratulating Duterte for doing a good job in handling the Philippines’ struggle against the illegal drug trade came amid allegations of massive human rights violations that included summary killings of suspects, warrantless arrests and killings of people based on so-called drug watchlists that are not backed by evidence.

Philippine police acknowledge as many as 6,000 deaths in Duterte’s war on drugs, which continued to rage and bring mostly civilian fatalities. Many of the deaths were results of what police described as legitimate operations where “nanlaban (fought back)” has become an overused term to explain the killing of police targets.

But human rights groups, including the highly respected Human Rights Watch, estimated the death toll, mainly civilian, to exceed 20,000. Many killings are unsolved with relatives of the dead, in most cases, refusing to demand investigations, much less file charges against police out of fear they would be targeted next.

Critics of the killings associated with Duterte’s bloody campaign against drugs had likened Trump’s congratulatory message to a tacit approval and endorsement of Duterte’s alleged disregard for due process and human rights in the pursuit of his main law enforcement mission–slay or mangle the Philippines’ illegal drug network.

“There was a constant undercurrent in the Trump administration of [senior staff] who were genuinely horrified by the things they saw that were happening on these calls,” said the WaPo report, quoting one of its sources, a former White House official.

“Trump’s phone calls with foreign leaders were an anxiety-ridden set of events for his aides and members of the administration, according to former and current officials,” the report said.

Trump’s calls to world leaders came into focus following a whistleblower complaint that led to an impeachment hearing by the US Congress on abuse of power allegations against the US President.

The complaint, supported by a rough transcript released by Trump himself, showed Trump dangling release of military aid to Ukraine in exchange for dirt on his likely opponent in the November 2020 presidential elections, former US Vice President Joe Biden.

The call to Duterte came just months before Trump landed in the Philippines to attend the Asean summit in November 2017.

At the summit, Duterte and Trump gushed with praises for each other, according to accounts of their several meetings.

The gooey flow of praises continued months after the Asean meeting between Duterte and Trump in Manila.

In reports some two years after the summit in 2019, Panelo was quoted as saying that US State Secretary Mike Pompeo had found Duterte and Trump to be so alike in temperament and style of governance.

The reports cited Panelo as recounting the encounter between Duterte and Pompeo when the two met during Pompeo’s visit to Manila in March 2019.

“You’re just like our President!” Panelo quoted Pompeo as saying after that meeting with Duterte. The similarity lay in the two president’s penchant to use cuss words, according to Panelo.

In a Newsweek article in September 2018, Duterte was quoted as saying that Trump “speaks my language.”

The mutual admiration chain between Duterte and Trump appeared to have suffered a small cut in September 2018 when, according to news reports, Duterte blamed Trump, although indirectly, for launching a trade war with China with its hail of bullets reaching the Philippines.

“Because America…Trump wanted it. Even taxes, they raised it. Even import duties,” Duterte was quoted as saying in a South China Morning Post report.

The Philippine ruler, however, quickly slipped his gun back into the holster. “I will talk to friend Trump…I have nothing against the Amerian people, not the slightest misgiving against Trump,” the report further quoted Duterte as saying.

Aside from their foul mouths, another thing that could be connecting Trump and Duterte, according to a USA Today report, might be their dislike of former US President Barack Obama whom Duterte once called son of a whore for commenting that the rule of law should prevail in any law enforcement program, including Duterte’s war on drugs.

Duterte, however, had already apologized to Obama in September 2018, saying during a visit to Israel that he was “sorry for uttering those words.”

Palace reciprocates Trump’s admiration for Duterte: He loves him too

I get P1,000 monthly allowance from city gov’t of Manila—this is how I spend it