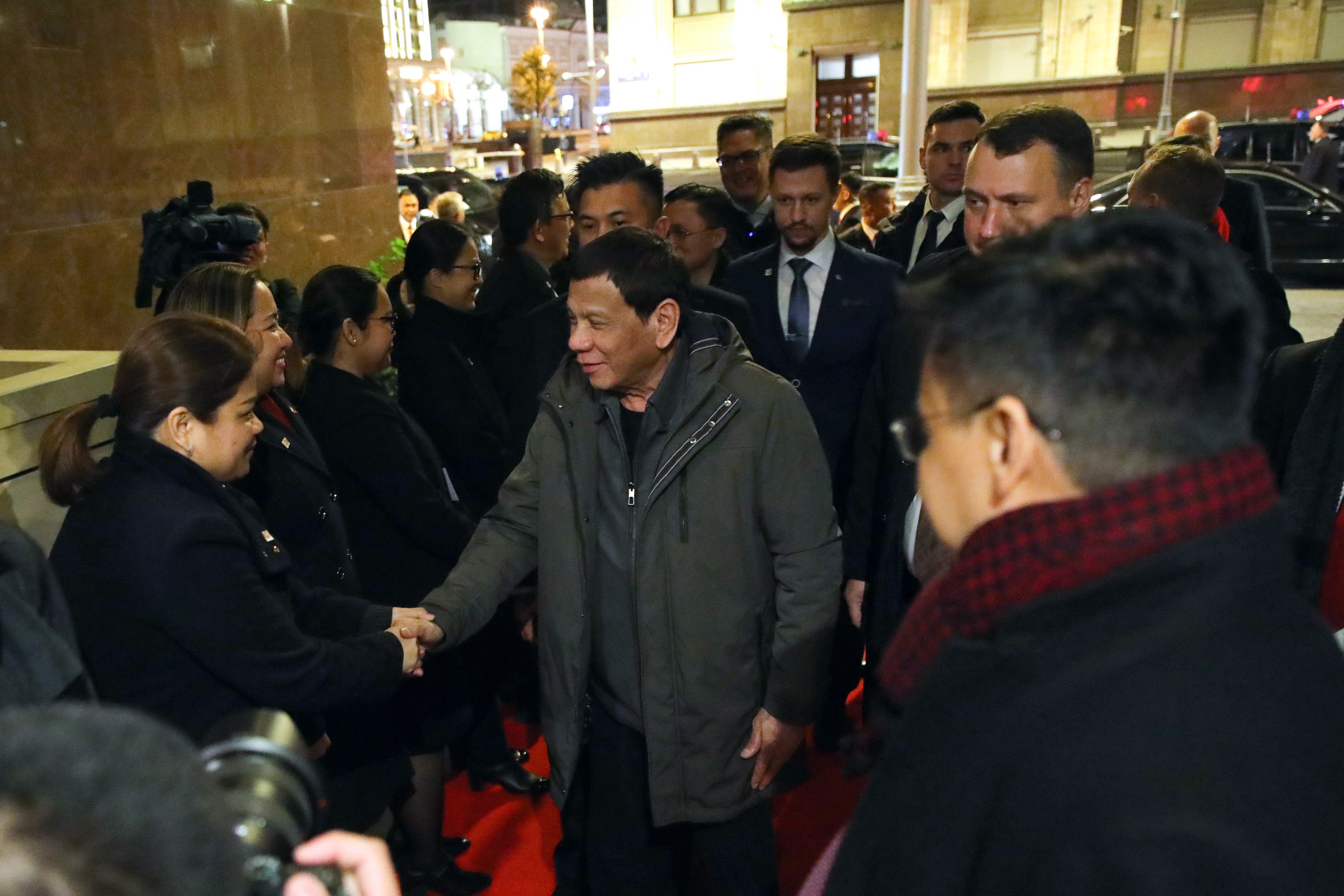 President Rodrigo Roa Duterte greets the officers from the Philippine Embassy in Russia upon his arrival at a hotel in Moscow, Russian Federation on October 2, 2019. ROBINSON NIÑAL JR./PRESIDENTIAL PHOTO

MOSCOW — President Rodrigo Duterte said he plans to invite Russian Orthodox missionaries to the Philippines as he hit the Catholic Church anew for supposedly “attacking” him.

“I’m planning to invite the Russian Orthodox missionaries to come to the Philippines so that we can look for a place where we can build the Orthodox Church,” Duterte said during the question and answer portion of the Valdai Forum in Sochi city on Thursday.

“It was built many years ago by the Russians, 1922. This was destroyed, It’s an old dilapidated…,” he added.

Before this, Duterte lamented how bishops have criticized his administration’s brutal war against illegal drugs.

“This has been the issue in the Philippines, that they have a President who’s a murderer. I assure you. I have a religion,” he said.

“And they say that, well, bishops and all of this… They’ve been attacking me. And I said, ‘Your religion is not… I have my own God,’” he added.

At the same forum, which was attended by other world leaders including Russian President Vladimir Putin, he also asked those critical of his drug war to investigate first before they condemn his campaign.

“Before you condemn, investigate. And…before you come up with these results…allow us the right to be heard,” he said.

“It is a God-given right to any person whether you live in autocracy or a tyranny, every person has the right to be heard,” he added. /jpv

Read Next
LOOK: Duterte lays wreath at Tomb of the Unknown Soldier in Moscow
EDITORS' PICK
DOH: Too early to say COVID-19 cases are declining
The best of bayside and city living at SMDC’s Sail Residences
COVID-19 cases in City of Manila are decreasing, says OCTA
Gov’t rolls out COVID-19 vaccination in select pharmacies on Jan. 20 to 21
Acer starts the year off strong with the Aspire Vero National Geographic Edition
Over 3 Million worth of prizes to be won at Smart Padala’s SENDali Manalo Promo!
MOST READ
Drug lord Espinosa tried to escape through air vent at detention facility – NBI
Marcos Jr. visits Cebu, stands as ‘ninong’ to mayor’s son
House OKs VAT exemption, bigger discount for seniors’ water, power bills
In Batanes, octogenarian dies of COVID-19
Don't miss out on the latest news and information.