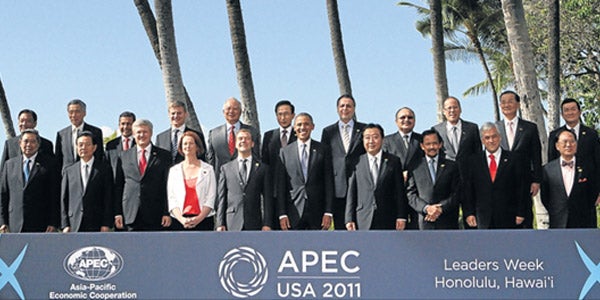 As this year’s Asia-Pacific Economic Cooperation (Apec) summit is in Hawaii, journalists had been salivating at the prospect of leaders such as Chinese President Hu Jintao modeling the US state’s colorful Aloha floral shirts.

Against the backdrop of towering palm trees and the sparkling Pacific Ocean, the leaders kept their Hawaiian shirts under wraps and lined out in their suits, waving stiffly to waiting photographers before quickly leaving.

US President Barack Obama later told reporters it was about time the fancy Apec outfits were retired.

“I got rid of the Hawaiian shirts because I had looked at pictures of some of the previous Apec meetings and some of the garb that had appeared previously, and I thought this may be a tradition that we might want to break,” he said.

“We gave them a shirt, and if they wanted to wear the shirt, I promise you it would have been fine. But I didn’t hear a lot of complaints about us breaking precedent on that one.”

The sight of Obama joshing around with foreign leaders in a silly shirt on palm-fringed Hawaii is hardly the image his political aides want to project as he starts his tough reelection bid.

The leaders also skipped the ritual at last year’s Apec summit in Yokohama, Japan, appearing in sober business suits, after organizers decided against turning them out in local garb. Their wives, however, got to wear resplendent silk kimonos handed out by the hosts.

Obama himself had stoked hopes that he would restore a tradition in his home state which might be the only way in which normally dry Apec summits penetrate public consciousness.

“The United States was there at the first meeting of Apec leaders on Blake Island (off Seattle), where President (Bill) Clinton began the interesting tradition of having us wear outfits picked out by the host nation,” Obama said in 2009 in Singapore when he announced Hawaii would host this year’s summit.

“I look forward to seeing you all decked out in flowered shirts and grass skirts,” he told fellow leaders.

The annual Apec group photo has seen its share of fashion disasters.

Clinton handed out leather bomber jackets in Seattle in 1993, but world leaders including then US President George W. Bush and then Russian President Vladimir Putin were forced to don blue calf-length silk tunics in Hanoi in 2006.

Chilean ponchos were de rigueur in Santiago in 2004.

In Singapore, leaders including Obama and Russia’s Dmitry Medvedev sported linen shirts with mandarin collars, a style inspired by the blend of Chinese, Malay and Indian culture found in Singapore.

In her autobiography, Cherie Blair, wife of former British Prime Minister Tony Blair, revealed some of the political calculations that could lie behind even the simple act of donning a fancy outfit overseas.

She said that her husband was given a lesson in international politics at a summit in Japan where she said Clinton chose the most hideous shirt offered to world leaders.

“Why on earth did you do that?” Tony Blair asked Clinton, according to the book written by the wife of the British leader then.

“Take it from an old-timer,”  Clinton told the British prime minister before explaining to the latter that his less offensive shirt was a naive political choice.

“Now you, Tony, wearing that particular shirt, people at home might conceivably think that you chose to wear it,” Clinton was quoted as saying.

“Me, wearing this shirt, everybody at home is going to think, Boy is that Clinton diplomatic, being so nice to those foreigners. There’s no way he would have chosen to wear that. What a good man he is.”