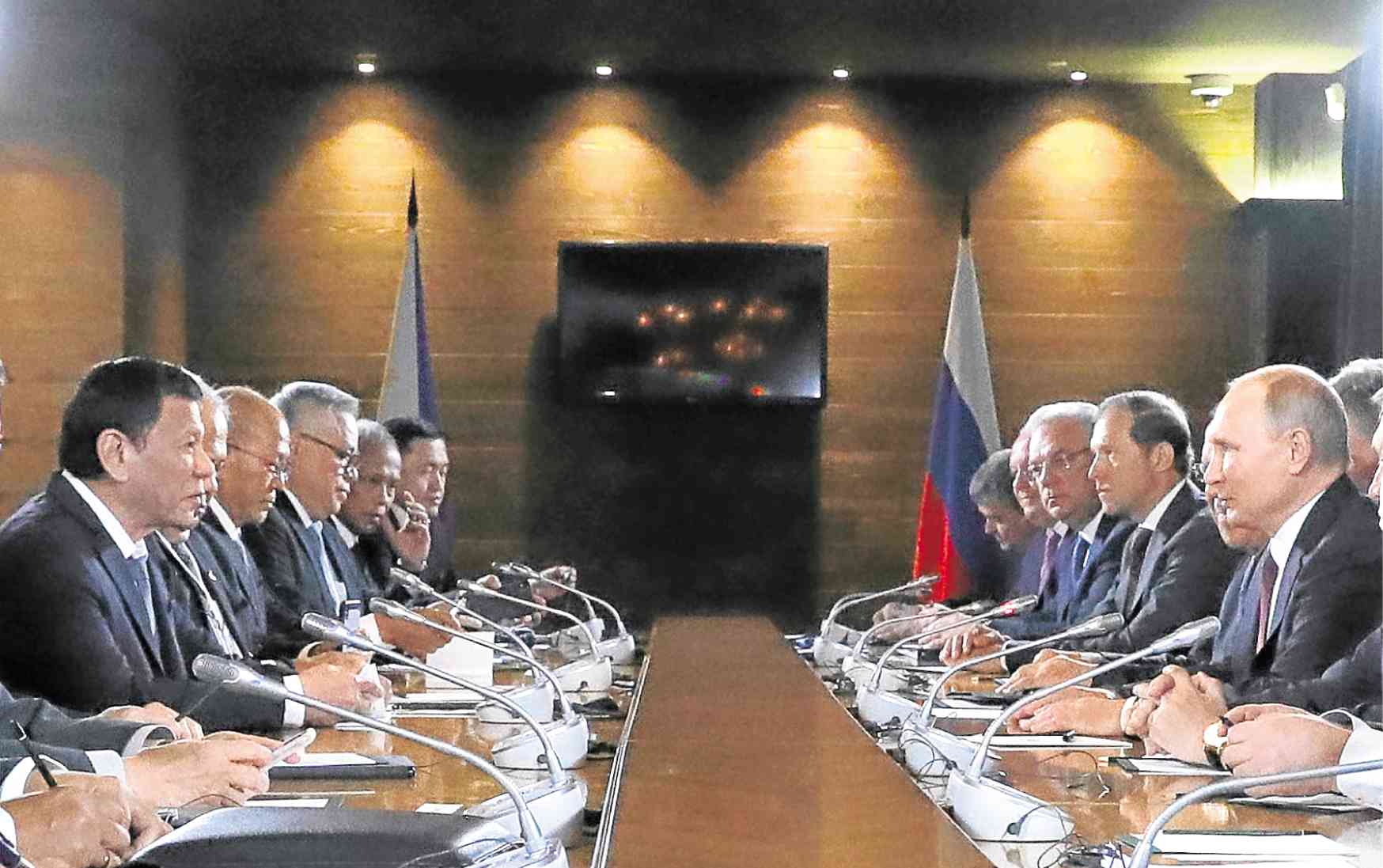 SOCHI TALKS Flanked by their top officials, President Duterte and Russian President Vladimir Putin hold a bilateral meeting at Polyana Hotel in the resort city of Sochi on Thursday. The two leaders agreed to strengthen their countries’ partnership in the fight against terrorism and expand their economic cooperation. —AFP

SOCHI, RUSSIA—President Duterte and Russian President Vladimir Putin agreed to strengthen their countries’ partnership in the fight against terrorism and enter into more economic cooperation.

The two leaders held a bilateral meeting with their top officials in a mountaintop ski resort on the sidelines of an international discussion forum on Thursday.

Mr. Duterte said the past two years since his first visit in 2017 saw a “dramatic increase” in bilateral activities, stressing engagement in defense, security and law enforcement matters.

“It is imperative to sustain this consultative dialogue to further strengthen the foundation of our growing relationship,” Mr. Duterte told Putin, who sat across a long table in a conference room at the Polyana Hotel in Sochi.

Mr. Duterte was flanked by a dozen Cabinet secretaries, the Philippine ambassador and his former close-in aide, Sen. Bong Go.

Putin stressed that the Philippines is “a very important partner of Russia in Asia.”

He congratulated Mr. Duterte for lowering the level of terrorist threat since the May 2017 attack by Islamic State-affiliated extremists in Marawi City that forced him to cut short his first visit to Russia.

“We are prepared to develop our partnership when it comes to countering terrorism and share our experience and all the developments,” Putin said.

He thanked Mr. Duterte for the revitalized bilateral relations, which he said was “in large part due to your personal attention.”

He said Russia also wanted to improve cooperation in space exploration and use of digital technologies.

The two leaders did not have a one-on-one meeting.

Putin met Mr. Duterte outside the conference room, and they entered the room together.

Unlike during his bilateral meeting with Russian Prime Minister Dmitry Medvedev on Wednesday, Mr. Duterte did not loosen his tie for his meeting with Putin.

His relaxed appearance during his meeting with Medvedev drew flak on Russian social media.

Pavel Vondra, an editor at CRo Plus radio, on Thursday posted on Twitter a photo of Mr. Duterte shaking hands with Medvedev and called out the Philippine leader for showing up “a bit unkempt.”

Photos and a video of the meeting showed Mr. Duterte in an ill-fitting suit with his necktie hanging loose.

Vondra, in his tweet, said: “The Russian internet is having a blast. Did he drink all night? Did he just leave the pub? Do Filipinos know what a [state visit protocol] is? People ask.”

Coming to Mr. Duterte’s defense, his spokesperson Salvador Panelo said the President just loosened his tie because he was feeling “suffocated and very uncomfortable.”

Panelo said Mr. Duterte was “very hygienic” and that “his body emits a refreshing scent.”

“That’s what ladies tell me when they kiss [the President], that he smells good,” Panelo said.