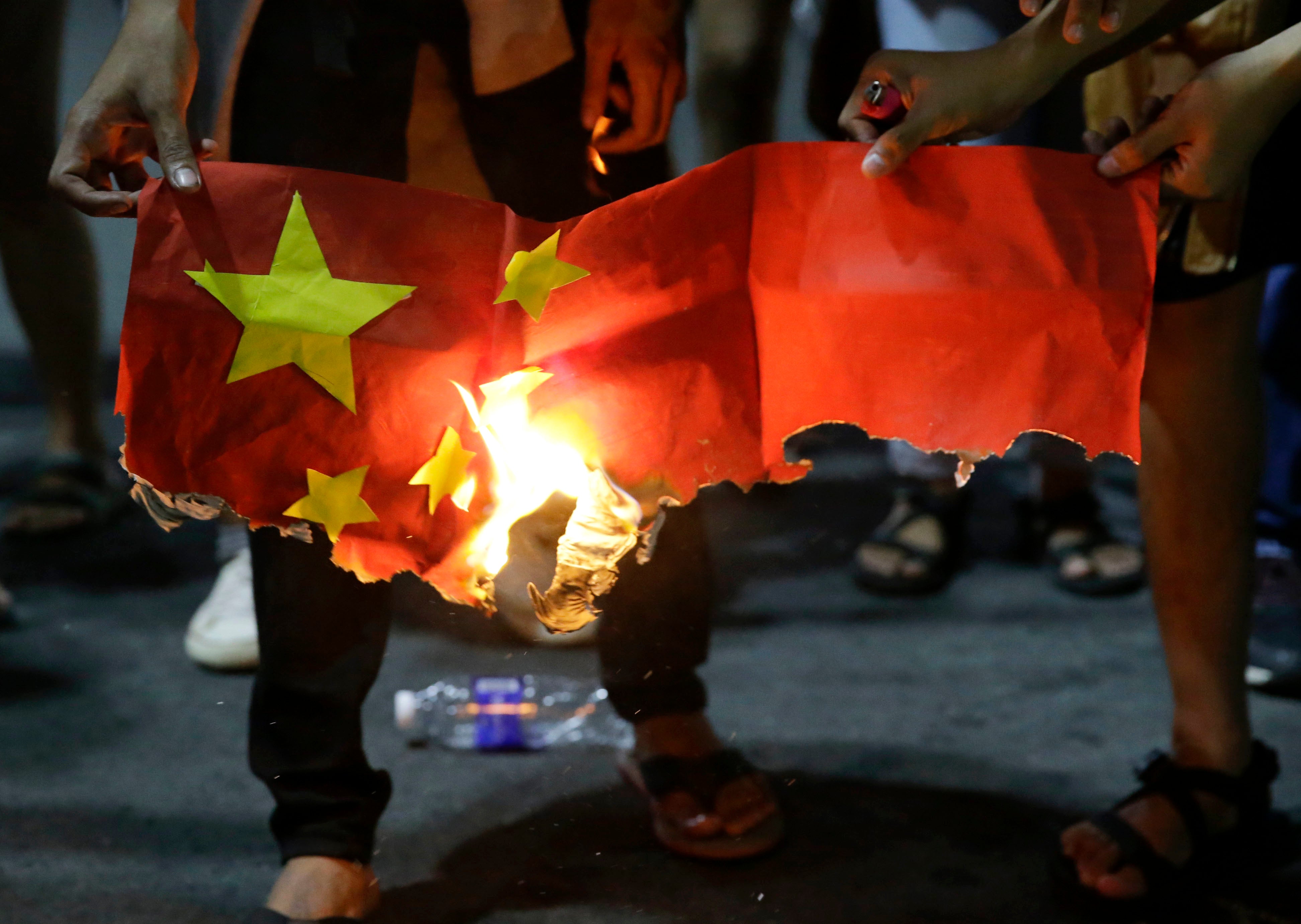 In this November 20, 2018, file photo, students burn a Chinese flag as they protest against the visit of Chinese President Xi Jinping outside the Presidential palace in Manila, Philippines. The Philippine foreign secretary has ordered via Twitter the filing of a diplomatic protest against China after Chinese coast guard ships reportedly strayed near a Philippine-occupied shoal in the disputed South China Sea. (AP Photo/Aaron Favila, File)

MANILA, Philippines — The Philippine foreign secretary has ordered via Twitter the immediate filing of a diplomatic protest against China after Chinese coast guard ships reportedly strayed near a Philippine-occupied shoal in the disputed South China Sea.

Foreign Secretary Teodoro Locsin Jr., who is accompanying Philippine President Rodrigo Duterte on a visit to Russia, issued the usually confidential order Wednesday to his officials at the Department of Foreign Affairs via the social network. Relations between the Philippines and China have vastly improved under Duterte, but territorial rifts have remained a thorny issue.

The Philippine military chief and other officials have reported new activities by Chinese coast guard vessels at the Second Thomas Shoal, where Filipino marines keep watch aboard a long-grounded navy ship. China claims almost the entire South China Sea, a strategic waterway where U.S. navy ships and aircraft have patrolled for decades.

Locsin tweeted: “Do I have to fly home to file the goddamned diplomatic protest myself? That’s the military speaking. Not some friggin’ civilian media outlet. File now!!!”

There was no immediate comment from Chinese Embassy officials in Manila, but they have claimed in the past Chinese sovereignty over the shoal and most areas of the South China Sea.

Chinese coast guard ships have guarded the shoal from a close distance since 2013 in a quiet standoff with a small contingent of Filipino marines manning a rusty but still actively commissioned navy ship that Manila deliberately grounded in 1999 after China seized the nearby Mischief Reef five years earlier.

China has demanded the Philippines pull out the World War II-era tank landing ship, the BRP Sierra Madre, and also warned Manila from undertaking construction in the area, a rich fishing ground. Manila has refused to withdraw its navy ship and has protested past Chinese blockades of Philippine vessels transporting fresh supplies to the marines stationed at the shoal.

A team of Associated Press journalists allowed to travel aboard a small Philippine navy-manned resupply boat with other reporters in 2014 witnessed how one of at least three Chinese coast guard ships warned the boat by radio to back away from what it said was Chinese territory.

When the Philippine vessel persisted, a much larger Chinese coast guard ship maneuvered dangerously close to block its advance. The Philippine vessel, however, managed to move through rocky coral outcrops and reached the Sierra Madre.

Under Duterte, Chinese and Philippine officials have held talks to avoid such dangerous encounters, which have eased but continue to happen from time to time. A Philippine official told the AP that a Philippine resupply vessel was blocked anew by a Chinese ship at the shoal in May.

The official said Chinese coast guard ships did not mean to block Philippine resupply vessels en route to Second Thomas Shoal but wanted to check from time to time to ensure they’re not loaded with construction materials.

The Philippines strongly opposes such Chinese inspections of its ships in the vicinity of the shoal and will protest any such attempt, said the official, who spoke on condition of anonymity because of a lack of authority to speak publicly about the issue. /kga