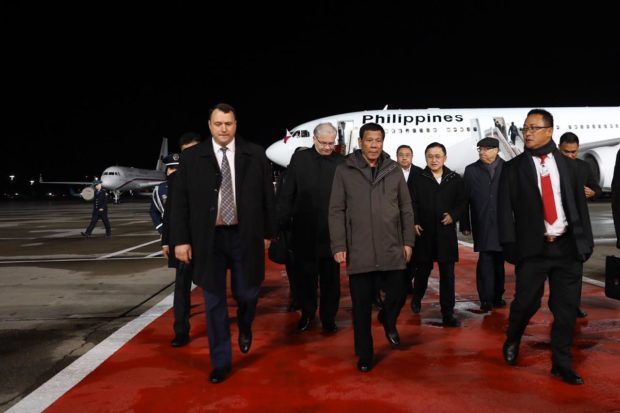 MOSCOW, Russia – Philippine President Rodrigo Duterte views his second visit to Russia as an “auspicious opportunity” to deepen the bilateral relations between the two nations, his spokesman said.

“President Duterte went to Russia upon the invitation of President Vladimir Putin and our leader views his latest trip as an auspicious opportunity to deepen our ties with the Russian Federation,” Presidential Spokesperson Salvador Panelo said in a statement following the President’s arrival in the Russian capital early Wednesday. 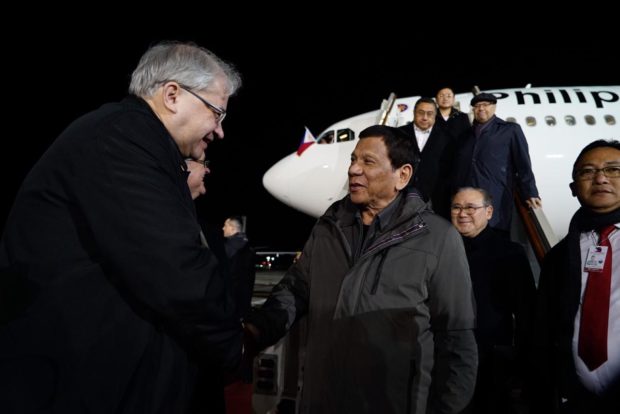 RODY IN RUSSIA – President Rodrigo Roa Duterte receives a warm welcome from Russian Ambassador to the Philippines Igor Khovaev upon his arrival at the Vnukovo Military Base Airport in Moscow on October 2, 2019. (King Rodriguez/Presidential photo)

“He further considers this second visit as a good occasion to broaden Philippines-Russia cooperation in a wide range of areas, such as trade and economics, defense and military, health, and science and technology, among others,” Panelo added.

The Palace official said that under the Duterte administration, the ties between the Philippines and Russia witnessed a dramatic reinvigoration of formal diplomatic relations since its establishment in June 1976.

“The President hopes to have a robust, comprehensive and mutually-beneficial partnership with Russia under President Putin whom our Chief Executive fondly calls his favorite hero,” Panelo said.

While in Russia, Duterte will have a bilateral meeting with Russia President Vladimir Putin and witness the signing of several agreements.

The President is also scheduled to hold a bilateral meeting with Russian Prime Minister Dmitry Medvedev, whom he first met on the sidelines of the Association of Southeast Asian Nations (Asean) Summit in Laos back in 2016 and later in Manila for the 50th Asean Summit.

Duterte will also interact with Russian business leaders in Moscow to encourage them to invest in the Philippines.

Panelo said that of the 221 trading partners of the Philippines, Russia ranks 21st.

Russia, meanwhile, ranks 19th out of 198 import suppliers of the Philippines.

The President will also speak about the Philippines’ independent foreign policy course chartered by his administration before future diplomats of Russia in the Moscow State Institute of International Relations, one of the top Russian universities for international, political, legal and economic studies.

To cap off his visit, Duterte will touch base with the members of the Filipino community in Russia.

Duterte’s second visit to the two Russian cities from October 1 to 6 will pick up from his first trip to Russia back May 2017 which was cut short due to a terror attack in Marawi City.

This will also be the fourth meeting between the Duterte and Putin.

Duterte had once called Russian President Vladimir Putin his “favorite hero,” as he tried to cement better ties with Russia. /gsg

Read Next
Body of Filipino, 3 others found; 2 people missing in Taiwan bridge collapse
EDITORS' PICK
Current dominant strain of COVID-19 more infectious than original—study
Smart releases Hyun Bin’s second TVC
DOLE: Return of OFWs’ remains from Saudi to be ‘delayed,’ deadline moved to ‘early next week’
‘Justice will be done,’ Duterte assures as he vowed probe on Jolo incident to bare ‘truth’
EuroMillions Superdraw: A lottery draw unlike any other is coming to the Philippines
Water remains our saving grace right now
MOST READ
Locsin warns of ‘severest response’ if China’s army drills in SCS ‘spill over’ to PH domain
Duterte tells military: No other president looked at you the way I did
BREAKING: Duterte signs anti-terror bill into law
Vico: Cleanup of bidding process saved Pasig gov’t P415M
Don't miss out on the latest news and information.