Pushed in US Senate: ‘No entry’ for De Lima jailers 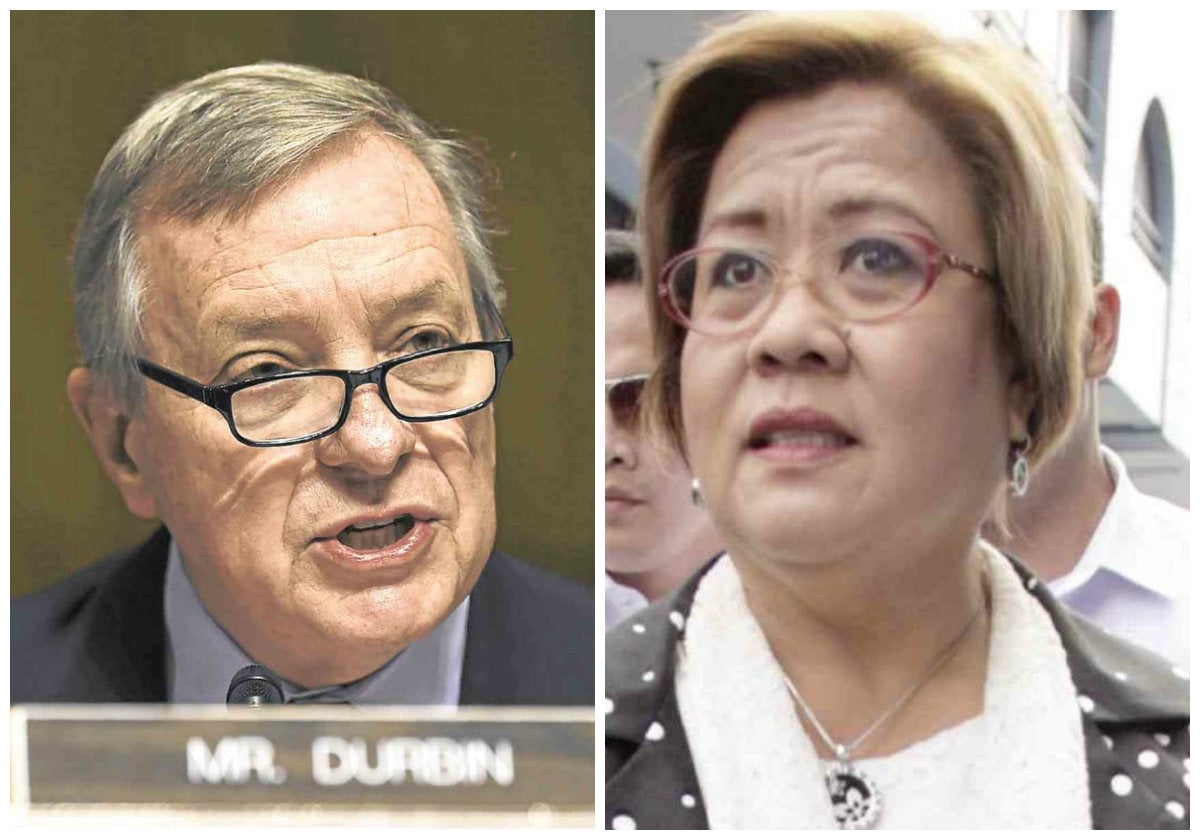 A US Senate committee deliberating on a budget bill has approved an amendment that would deny US entry to any Philippine official involved in the “wrongful imprisonment” of Sen. Leila de Lima.

Malacañang was quick to denounce the measure as an intrusion into Philippine sovereignty.

In a tweet on Thursday, Democratic Sen. Richard Durbin welcomed the Senate appropriations committee’s approval of the amendment he proposed with fellow Democrat Patrick Leahy on the Fiscal Year 2020 State and Foreign Operations Appropriations Bill.

“Good to see the Senate Appropriations Committee pass my amendment with @SenatorLeahy today to prohibit entry to any Philippine Government Officials involved in the politically motivated imprisonment of Filipina Senator Leila de Lima in 2017,” Durbin said in his tweet.

The amendment, as relayed to the media by De Lima’s office on Friday, reads: “Prohibition on Entry–Section 7022(c) of this act shall be applied to officials of the government of the Philippines about whom the secretary of state has credible information [that they] have been involved in the wrongful imprisonment of Sen. Leila de Lima, who was arrested in 2017 on politically motivated charges.”

De Lima, a staunch critic of President Duterte, has been in detention at the Philippine National Police headquarters since February 2017 on charges that she was involved in the illegal drug trade.

She has denied the charges, saying they were fabricated in retaliation for her fierce criticism of Mr. Duterte’s war on drugs and monitoring of his human rights record since the time she headed the Commission on Human Rights in 2008.

The amended US Senate bill also referred to other cases of “wrongful detention” in other countries and sought the same prohibition on the entry of certain “officials of the governments of Turkey, Egypt or Saudi Arabia.”

Durbin and Leahy are among the US officials who have been closely following Philippine affairs under the Duterte administration.

Durbin has called on the Philippine government to release De Lima through a resolution he filed in April with four other senators.

In his latest tweet, the US senator from Illinois reiterated his call to “#FreeLeilaNow.”

In a statement posted on his website on Sept. 24, Leahy, a senator from Vermont, also lamented the killing of environmental activists in the Philippines as reported by the international watchdog Global Witness. “Many of the victims simply wanted a say in how their land and the country’s natural resources are used. The perpetrators are almost never arrested or prosecuted,” Leahy then said.

Reacting to the Durbin-Leahy initiative being approved by the US Senate panel, presidential spokesperson Salvador Panelo on Friday said “the Palace considers such undertaking as a brazen attempt to intrude into our country’s domestic legal processes given that the subject cases against the detained senator are presently being heard by our local courts.”

“It is an insult to the competence and capacity of our duly constituted authorities as such act makes it appear that this US Senate panel has the monopoly of what is right and just,” Panelo said. “It is an outright disrespect to our people’s clamor for law and order. It treats our country as an inferior state unqualified to run its own affairs.”

The Palace official also maintained that De Lima “is no prisoner of conscience.”

Nevertheless, he said, Malacañang will “respect their (US) democratic processes, be these in the form of a congressional measure or an immigration policy.”

“We shall leave it to the international community to ascertain which nation values the rule of law in accordance with the principle of state sovereignty,” Panelo said.

“We continue to mind our own business, as each nation has enough problems that its government should focus on. We hope that the Senate panel of these United States of America shares the same policy,” he added.

Philippine senators were divided over the amendment pushed by Durbin and Leahy.

Sen. Francis Pangilinan, De Lima’s ally in the opposition Liberal Party (LP), said “we welcome this move of the US senators, an act of solidarity not only for … De Lima, but for all the murdered victims and their orphans, widows, and mothers and fathers, who are now doubly burdened by the absence of a loved one and in many, many cases a family breadwinner.”

Sen. Ping Lacson, a member of the Senate majority bloc, said “I really don’t get the sense (of the US Senate bill).”

“Does it mean that all the nine Supreme Court justices who voted to uphold De Lima’s detention will be barred from entering the US? How about the government prosecutors (who handled De Lima’s case)?” he asked.

Lacson also wondered why the US Senate bill only referred to De Lima and not all individuals claiming to be victims of “malicious persecutions.”

He also pointed out that it was still premature to comment further on the matter since the proposal has yet to be adopted by the entire US Senate and the entire Congress.

For Senate President Vicente Sotto III, “they [US senators] are just trying to meddle when they don’t even know about [De Lima’s] case.”

“She is innocent until proven guilty, but those US senators are not judges here in the Philippines,” Sotto said in a text message.