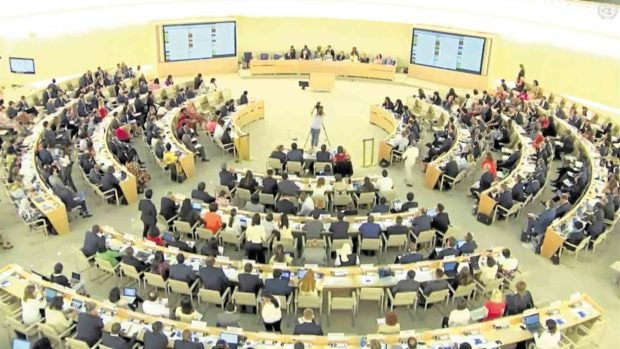 REJECTED BY THE PALACE “Politically partisan, one-sided” was how Malacañang dismissed the Iceland-led resolution calling for a review of the Philippine human rights situation and which was narrowly approved by the United Nations Human Rights Council in Geneva on July 11. —SCREENGRAB/UN.ORG

MANILA, Philippines — The government does not want any money or financial assistance from 18 countries that voted in favor of a United Nations Human Rights Council (UNHRC) resolution to investigate the human rights situation in the Philippines.

A confidential Aug. 27 memorandum from the Office of the President suspended negotiations on loans and grants as well as the signing of related agreements with countries that pushed for the resolution submitted by Iceland on July 4.

The 47-member UNHRC voted on the resolution on July 11, with 18 in the affirmative, 14 negative and 15 abstentions.

Signed by Executive Secretary Salvador Medialdea, the memorandum to suspend all new talks and deals on loans and grants from those countries was circulated to all department secretaries and heads of agencies, government-owned and/or -controlled corporations as well as government financial institutions.

The Palace memorandum read in part that, “In light of the administration’s strong rejection of the resolution of the UN Human Rights Council, … all concerned officials are directed to suspend negotiations for and signing of all loan and grant agreements with the governments of the countries that cosponsored and/or voted in favor of the aforesaid resolution, pending the assessment of our relations with these countries.”

“This directive shall take effect immediately and shall remain effective until lifted by [the Office of the President],” it added.

A copy of the memorandum was posted on the Bureau of Customs website.

As of Friday night, Customs Memorandum Circular No. 211-2019, which also attached the transmission letter to Finance Secretary Carlos Dominguez III dated Sept. 3 from Malacañang’s Records Office, was still up on the website.

Sought for comment, presidential spokesperson Salvador Panelo denied that the Palace issued such a memorandum.

“The President has not issued any memorandum suspending loans and negotiations involving 18 countries that voted in favor of the Iceland resolution,” he said in a message to reporters.

With the new Palace order, the Philippines will now reject potential financial aid from Australia and the European countries that voted for the UN resolution.

The order will forgo a total of $421.15 million (nearly P22 billion) in fresh loans and grants primarily for new infrastructure projects, which were being negotiated with Australia, Austria and the United Kingdom.

In comparison, these combined forgone potential loans were almost double the latest loan agreement of $219.78 million signed by the Philippines with China last month, to finance the project management consultancy for the P175.3-billion, 639-kilometer Philippine National Railways South Long Haul.

Documents from the National Economic and Development Authority (Neda) as of September last year showed that the Philippines had been negotiating with Austria for a $177.22-million loan for the “Bridge Construction and Acceleration Project for Socioeconomic Development” to be implemented by the Department of Public Works and Highways (DPWH), involving full turnkey construction of readily usable 30 bridges in Regions 1, 2, 3, 4A, 5, 6, 7 and 11.

With regards to the United Kingdom, in the official development assistance (ODA) pipeline was a $159.58-million loan for the “Iconic Bridges Project for Sustainable Socioeconomic Development of the Republic of the Philippines, Phase 1.”

Under the proposed UK loan, the DPWH will initially build three bridges in Cagayan and Isabela provinces also through full turnkey construction.

Being sought from Australia were two grants, one of which was worth $58.43 million to finance the Department of Trade and Industry’s “Trade, Inclusive Growth and Economic Reform (Tiger) for the Philippines” program.

According to the Department of Finance, the Philippines and Spain have been finalizing a memorandum of understanding for a 300-million euro ODA financing facility that Spain pitched to the Philippine government last year to cover agro-food, infrastructure and tourism projects in the country.

This would be the Philippines’ first pure ODA from Spain as the government had only received Spanish grants in the past.

In 2017, the Philippines rejected a 6.1-million euro trade assistance from the European Union, as the government stood pat on declining foreign grants with conditions from the donor.

The next year, three more projects amounting to 39 million euros were rejected, following criticisms from the European Union and European parliamentarians of Mr. Duterte’s drug war.

The President has been quick to respond to criticisms from Europe regarding his human rights record. “They don’t understand the social, economic, political problems of the Philippines,” he said in reaction to the UN resolution last July.

In an interview last year, Dominguez pointed out that “the EU is the only development partner of the Philippines whose financing agreement explicitly contains provisions that are linked to the national government conduct on human rights and rule of law …. [N]one of our other development partners around the world have such provisions in their respective financing grant agreements. It’s only the EU [as a bloc,] not the European countries [individually].”

China joined the Philippines in voting against the UN Human Rights Council resolution, while Japan abstained.