8 Coast Guards get 14 years each for Taiwan fisherman slay 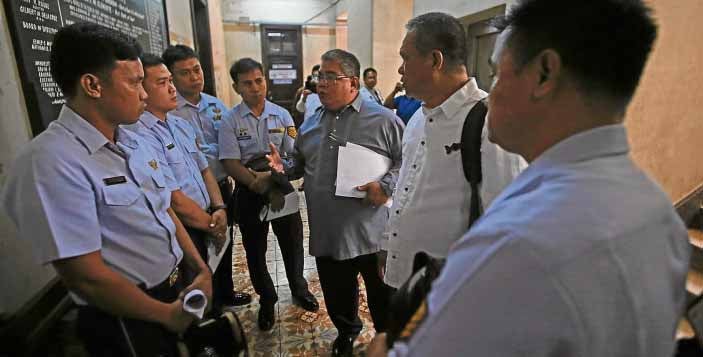 GUILTY Filipino coast guards accused of homicide in the 2013 shooting death of a Taiwanese fisherman in Balintang Channel listen to their lawyer outside a Manila court onWednesday. The border guards were found guilty and sentenced to up to 14 years in prison. They can appeal the decision. —AFP

MANILA, Philippines — Eight Filipino coast guards who opened fire on a Taiwanese fisherman in the Balintang Channel, between northern Philippines and southern Taiwan, were convicted on Wednesday of his 2013 killing, which strained ties between the neighboring nations.

“After sifting through the evidence presented, the court is convinced that the prosecution has been able to prove the guilt of the accused beyond reasonable doubt of the crime of homicide,” Reyes said in his ruling.

Reyes sentenced the officers to eight years and one day to 14 years, eight months and one day in prison, though they would be allowed to remain free while they appealed the sentence.

The court also ordered them to pay the fisherman’s family P100,000 in civil indemnity and moral damages.

“We are filing a notice of appeal so that what we perceived as errors of the trial court will be thrashed out,” said Paul Jomar Alcudia, one of the lawyers for the officers.

“Justice has been served,” Joanne Ou, spokesperson for the Taiwanese foreign ministry, said on Wednesday.

“Taiwan and the Philippines have long been important close neighbors. Today, the long-awaited justice in this shooting incident was served but it was a hard and a bitter experience for both countries. We now have to move on from this tragic incident and determine how to further enhance the bilateral relationships between our two countries,” the Taipei Economic and Cultural Office, Taiwan’s de facto embassy in Manila, said in a statement.

Foreign Secretary Teodoro Locsin Jr. said the court’s decision should prompt an apology from the Philippines.

“This is what I keep referring to, the machine-gunning of a Taiwanese fishing vessel and its crew in da wahterh as we fucking pronounce it,” Locsin twitted on Wednesday.

“[You sons of bitches], don’t you think the Philippine Republic should apologize to Taiwan on its knees and wipe the caskets with our flag?” he said.

In another tweet, Locsin, who has opposed the restoration of capital punishment, called the convicted officers “animals” who deserved to be killed.

“Sadly we have no diplomatic relations with Taiwan or I’d say I’m really sorry for what these animals did. I hope they get what they meted out to poor Taiwanese fishermen. But no it was not a hard and bitter experience for both countries — but only their surviving kin,” he said.

Cmdr. Armand Balilo, spokesperson for the Philippine Coast Guard, said the border security agency’s personnel were saddened by the ruling, but would continue patrolling the country’s waters.

“We believe that they just did their duty defending our territorial integrity. But the court has spoken and we will respect that and we will continue to support them,” Balilo said.

The killing of Hong caused a deep rift between Taiwan and the Philippines, with then Taiwan President Ma Ying-jeou describing it as “cold-blooded murder.”

It occurred in the Balintang Channel in northern Philippines, where waters within the exclusive economic zones of Manila and Taipei overlap, on May 9, 2013.

The coast guards argued during the trial that the Taiwanese boat Guang Da Xing No. 28 illegally entered Philippine waters in the Balintang Channel and sped away instead of stopping when they hailed it.

During a chase, the Taiwanese boat changed course and almost hit the Philippine Coast Guard vessel MCS 3001 before speeding away again, prompting a coast guard officer to order his men to fire on the boat’s engine to disable it.

The shooting led to the death of Hong, who, according to the account of the Taiwanese boat’s crew, was hit in the neck when he looked out to see why the Philippine vessel was chasing them.

The Taiwanese were on their way back to port after fishing in the high seas and sped away to avoid the gunfire coming from the Philippine vessel, according to the decision.

The Taiwanese boat was hit by gunfire at least 45 times. Hong was hit near the entrance to the boat’s engine room while the other crewmen took cover, the court said.

Taiwan protested the killing and the use of excessive force, and demanded that the killers be brought to justice.

To put pressure on Manila, Taipei ordered a freeze on the hiring of Filipino workers, warned its tourists against traveling to the Philippines, and staged naval drills near the sea border between the two countries.

Then Philippine President Benigno Aquino III repeatedly apologized for the killing and sent an envoy to Taiwan, but these actions were rejected as insincere.

In June 2013, the Department of Justice (DOJ) ordered an investigation of the shooting. The National Bureau of Investigation looked into the incident then returned a recommendation for the criminal prosecution of the border guards.

In March 2014, then Justice Secretary Leila de Lima announced that DOJ prosecutors had found probable cause to bring homicide charges against the eight officers.

The prosecutors said the border guards “all acted in unison with the common purpose of firing at the [Taiwanese fishing vessel] to force it to submit to [its] inspection or else.”

Relations have since normalized between the Philippines and Taiwan.

An agreement had been put in place to avoid using force in fishing disputes to prevent similar incidents. —With reports from Dona Z. Pazzibugan, AFP, AP and Inquirer Research