globalnation / Philippines
Philippines
IN DEFENSE OF THE PHILIPPINES’ TERRITORIAL INTEGRITY

PCG regrets conviction of men, insists ‘they just did their duty’ 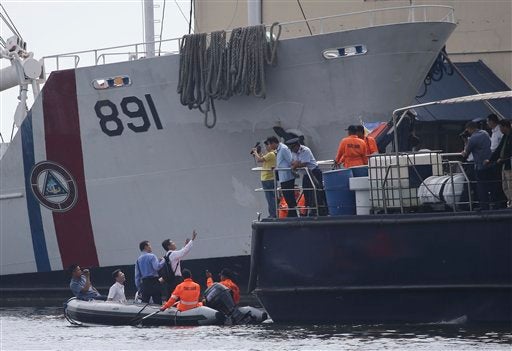 Taiwanese investigators ride a rubber boat as they inspect a ship involved in the alleged shooting of a Taiwanese fisherman while they continue their probe in Manila on Tuesday, May 28, 2013. They have completed their investigation into the death of the fisherman off Balintang Island in the northern Philippines, with the evidence collected by the National Bureau of Investigation, Yang Wan-Li, head of the delegation, said on Thursday night. AP FILE PHOTO/AARON FAVILA

MANILA, Philippines — The Philippine Coast Guard (PCG) has expressed sadness over the conviction of their men as it maintained that the eight personnel were only doing their duty to defend the country’s territorial integrity.

A Manila court has convicted the eight PCG personnel for the death of a Taiwanese fisherman near Batanes island in 2013.

PCG spokesman Armand Balilo told reporters Wednesday: “On the part of our personnel, malungkot ito…Naniniwala kami that they just did their duty defending our territorial integrity.”

Echoing Balilo’s statement, Atty. Rodrigo Moreno, the lawyer for the six accused said the public should not forget why a Taiwanese fishing vessel was inside the country’s territory.

In convicting the eight Coast Guard personnel, the Manila Court said circumstantial evidence presented was sufficient enough to prove beyond a reasonable doubt that the accused conspired to kill the fisherman.

The prosecution has presented a total of 13 witnesses, including the victim’s son Hong Yu Tzu. Other witnesses presented by the prosecution included Lee Jing Wei, Deputy Director of the Forensic Science Division of the Criminal Investigation Bureau of Taiwan; Hiyasmin G. Abarientos, a ballistician from the National Bureau of Investigation (NBI); four other NBI experts; and a ballistic expert from Taiwan.

NBI’s ballistic examination and comparison with the firearms and slugs recovered from the fishing vessel showed that the bullets were fired from three of the 15 firearms recovered – a Springfield M14 rifle, a caliber 7.62 rifle, and a Browning .30 caliber machine gun.

“In all criminal cases, you prepare for the worst which is what happened now and we never agreed with the NBI results that is why we were disputing it during the trial,” Moreno said, adding that they will take the matter to the Court of Appeals.

On the part of Balilo, he said they were hoping that the poaching activity of the Taiwanese fishermen will be brought out during the proceeding. While he expressed regret that such an issue was not highlighted in court, he said they respect the process.

“Nag-depend kami sa proceedings sana matuldukan kung ano talaga nangyari and we are praying, hoping that it would be favorable to our personnel [but] hindi ganun ang nangyari. We have to respect the judicial process,” Balilo said. /kga

Read Next
8 Coast Guard personnel found guilty in death of Taiwanese fisherman
EDITORS' PICK
PH preps for China virus: Question of when, not if
Museums ‘put to sleep,’ churches closed amid volcano’s unrest
SM continues to send relief assistance to remote towns in Batangas
Beyond water service: Maynilad builds massive infrastructure projects to clean up Metro Manila waterways
Seventh judge assigned to handle De Lima case
Timeless Elegance in the Philippines’ Most Distinguished Home Kitchens
MOST READ
Part of Aurora Boulevard in Cubao closed from Jan. 25 – Feb. 1
Lacson on Duterte’s threat to end VFA over Bato’s canceled visa: Where is the connection?
PH preps for China virus: Question of when, not if
No Bato visa, no VFA–Duterte
Don't miss out on the latest news and information.