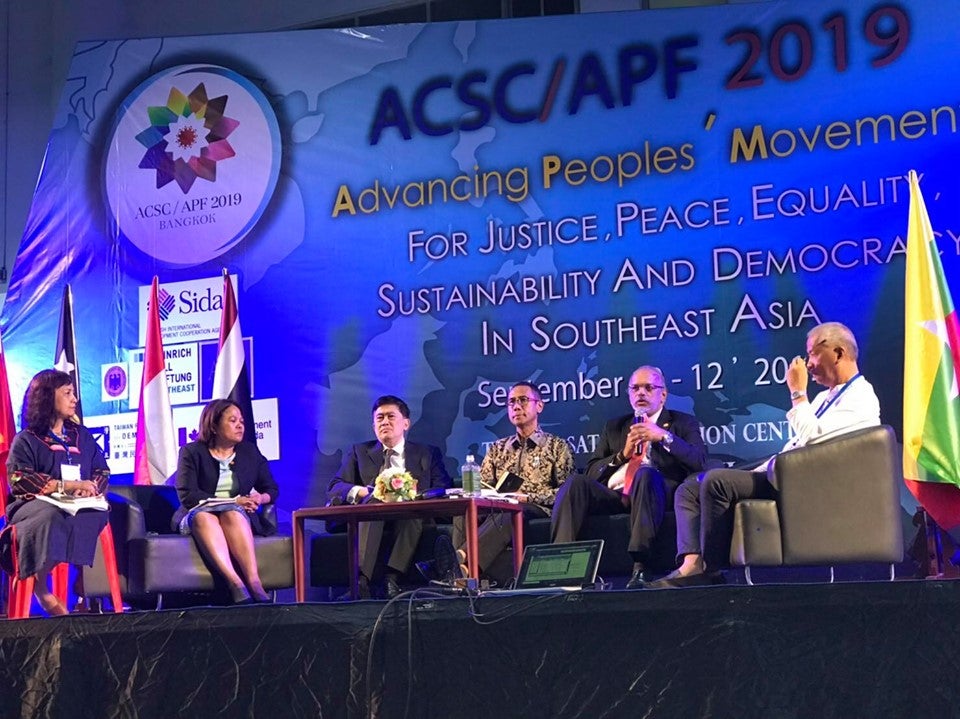 Leaders of the Asean Civil Society Conference Asean People’s Forum have taken notice and in their dialogue on Sept. 12, they included the environment as the fourth pillar of the Association of Southeast Asian Nations region. Four Asean leaders from Thailand, Indonesia, Malaysia and Timor-Leste accepted the invitation for the dialogue.

With the theme “Advancing Peoples’ Movements for Justice, Peace, Equality, Sustainability and Democracy in Southeast Asia” the forum was held on Sept. 10-12, 2019 at Thammasat University Convention Center in Pathum Thani, Thailand.

In 2009, during the Asean chairmanship of Thailand, the Asean civil society groups already proposed the fourth strategic pillar on the environment.

The fourth pillar seeks to focus on discussions on challenges and solutions to environmental ruin caused by rapid economic growth in the Asean region. It also places best practices and sustainability at the center of decision-making.

Thai Deputy Permanent Secretary Arthayud Srisamoot, of Thailand’s Ministry of Foreign Affairs, does not agree completely with having a fourth pillar for the environment. He said the environment is a social pillar and relate to all Asean’s pillars. Instead of just promoting environmental awareness, he said there should be action.

Malaysian Ambassador Dato’ Jojie Samuel said in 2015, at the 27th Asean summit in Kuala Lumpur, the idea for the environment pillar was born. If Asean worked together on this, he said civil society groups should be assured of the environment being on the Asean agenda.

Samuel, however, said the Asean Secretariat’s role must be expanded because of the increasing number of issues that the region is facing. More funding was one way to do that, he said.

Indonesian Deputy Chief of Mission to Thailand Dicky Komor acknowledged that the environment was vital.

Although Timor Leste is still just an observer in Asean, Elisa Maria da Silva, counselor and deputy chief of mission, said her country was ready to tackle the issue of environment.

Timor Leste has been besieged with problems since its independence from Indonesia in 1999. As an island country,  it is rich in natural resources, yet due to the absence and lack of definite development model, Timor Leste has been struggling ecologically and economically. Presently, the country is in partnership with Australia in petroleum and natural gas ventures.

In a statement, the Asean Civil Society groups and peoples’ organizations recommend to the Asean governments that the environment pillar lead to transparency and public participation in environmental decision-making. They also suggested that all development projects require free, prior and informed consent of communities and that best practices are resorted to.

Due to the negative impact of dam constructions on the livelihood of people living along the Mekong River, the groups recommended, too, that energy policies don’t lead to ecological ruin.

“We need energy transition from the destructive sources of power to renewable,” said Nguy Thi Kanh, founder of Green Innovation, an alternative energy company in Vietnam.

“If we could not meet it now, it’s too late. We already have solutions. We only need to adopt these,” she added.

They also urged the Asean to support people-driven innovations and markets. Most important, however, was the role youths have to play in the environment pillar.

“Taking alternatives is a fundamental right. It is creating a life with dignity,”  Quinones said.

He said one such alternative is social solidarity economy, which is a form of resisting global capitalism which destroys the environment, displaces people and creates economic inequality.

At least 1,000 participants were there. For more than 10 years, civil society organizations in Southeast Asia had been engaging Asean governments and played roles in addressing challenges that Asean nations faced like refugees and migration, social justice, human rights and universal health care.

The forum is held every year in the Asean country that would host the Asean summit which would be held next in Bangkok on Oct. 31 to Nov. 4. /tsb