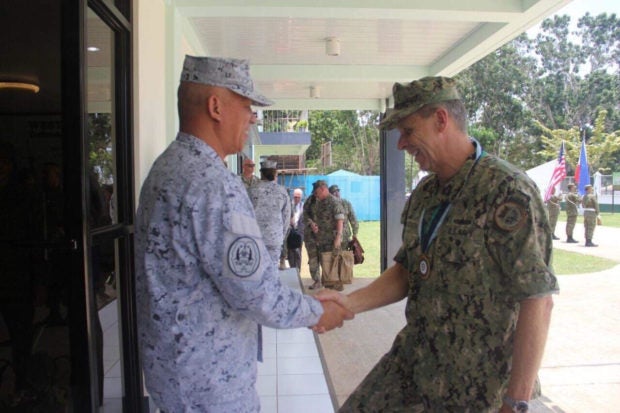 MANILA, Philippines — The military unit overseeing a significant portion of the West Philippine Sea – the Western Command (Wescom) based in Palawan – will soon receive a command and control center facility from the United States.

“Wescom is also thankful that out of the US generosity, (it) will soon be able to add the newly-installed Command and Control (C2) Fusion facilities in its inventory list of vital facilities,” Wescom chief Vice Adm. Rene Medina said Thursday.

“The C2 Fusion is designed to synchronize activities and efforts during combined training in support of the provisions of RP-US Mutual Defense Board/ Security Engagement Board (MDB-SEB) Framework,” he told INQUIRER.net.

‘MDT not just a piece of paper’

The commander in charge of the US military operations in the Pacific reiterated Washington’s commitment to its Mutual Defense Treaty (MDT) with Manila when he visited Wescom on Wednesday.

Adm. Philip Davidson, head of the US Indo-Pacific Command (IndoPacom), paid a visit to Wescom headquarters in Puerto Princesa City as part of his itinerary for the regular MDB-SEB meeting.

In his meeting with Wescom officials, Davidson was “very clear and specific” of the US commitment to the implementation of the MDT and said it was “not just a piece of paper without any value,” Medina said.

The 68-year-old MDT binds the two countries to support each other in case of an armed external attack. Defense Secretary Delfin Lorenzana had previously called for a review of the treaty due to ambiguities and the ongoing developments in the South China Sea.

Earlier this year, US Secretary of State Mike Pompeo said “any armed attack” against Filipino forces, aircraft and public vessels in the South China Sea “will trigger mutual defense obligations” under the treaty.

Medina likewise said Wescom is also committed to the MDT. He also took the opportunity to recognize the impact of US efforts to help the Philippine military in defense and security capabilities and its role to maintain peace and stability in the region.

“We are very thankful that our harmonious relationship with the United States in terms of military cooperation grows even stronger each year. We do hope that this cooperation and partnership will continue to grow in the years to come,” he said. /kga

Contamination not found in 48 COVID testing by Red Cross – RITM