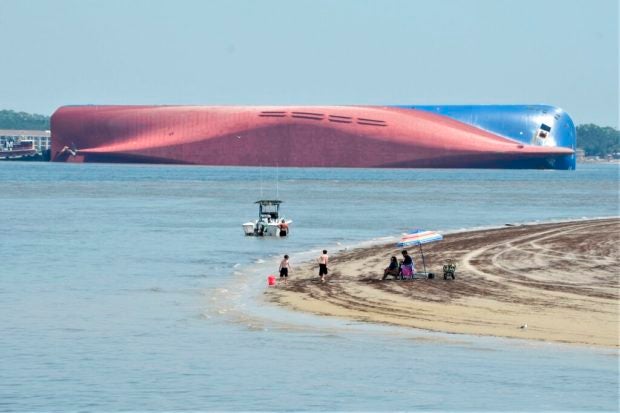 People are shown on Jekyll Island’s Driftwood Beach as the Golden Ray cargo ship is capsized in the background, off the Georgia coast, Sunday, Sept. 8, 2019. (AP)

JEKYLL ISLAND, Georgia  — Coast Guard rescuers began pulling trapped crew members from a capsized cargo ship Monday, finding all the 13 Filipinos and 10 South Koreans on board alive more than a day after the vessel overturned while leaving a port on the Georgia coast.

But the exhilaration of rescuing three South Korean crew members was tempered by the realization that a fourth person was still trapped behind glass in an engineering compartment on a separate deck.

“The same experts who got us to where we are right now are going to find a way to extract him,” Coast Guard Capt. John Reed said at a news conference in nearby Brunswick.

The rescue followed nearly 36 hours of work after the Golden Ray, a giant ship that carries automobiles, rolled onto its side early Sunday as it was leaving Brunswick, bound for Baltimore.

In the hours immediately after the accident, the Coast Guard lifted 20 crew members into helicopters before determining that smoke and flames and unstable cargo made it too risky to venture further inside the vessel. Officials were also concerned about the stability of the ship, which was carrying 4,000 vehicles, some of which may have broken loose. 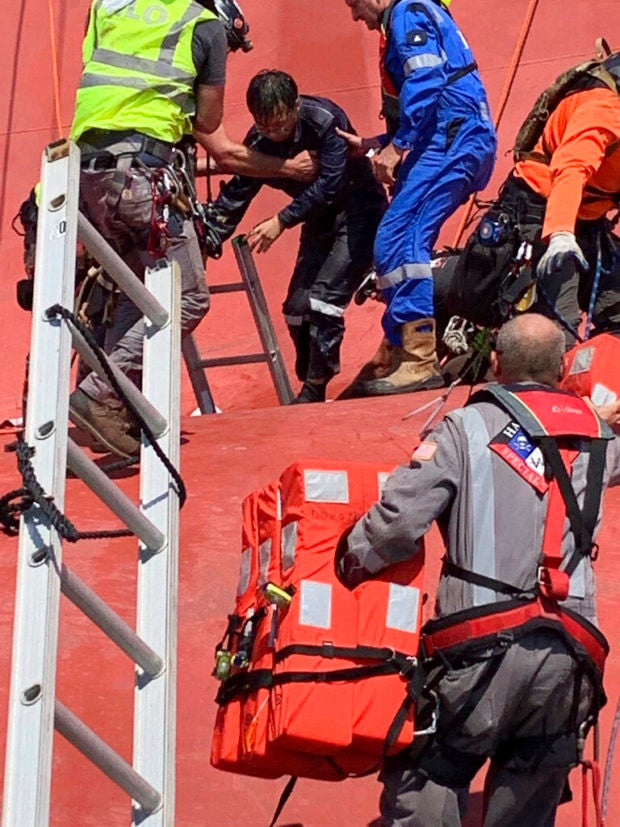 A crew member is helped off the capsized ship.(U.S. Coast Guard via AP)

That left responders looking for the remaining four crew members. At first, Reed said, rescuers were not sure whether the noises they were hearing inside were some of the vehicles crashing around. But by dawn Monday, they had grown confident that the taps were responses to their own taps, indicating someone was alive inside.

“It was outstanding when I heard the news this morning that we had taps back throughout the night,” Reed said, saying it helped lead rescuers to the right place on the 656-foot (200 meter) vessel, and provided motivation.

“They were charged up knowing the people were alive,” Reed said.

On Monday morning, rescuers landed on the side of the Golden Ray and rappelled down the hull. Lt. Lloyd Heflin, who was coordinating the search, said they found three men in a room close to the propeller shaft, near the bottom of the stern. Responders began drilling, starting with a 3-inch (7.5-centimeter) hole. Coast Guard officials brought the ship’s chief engineer, who was rescued Sunday, out to the ship to translate, and found the three men were “on board and OK,” as Heflin put it.

Reed said rescuers passed food and water through the hole to the men. It also provided fresh air to the propeller room, which Reed said was even hotter than outside, where the high was 93 degrees (34 Celsius).

Responders set up a tent on the hull and began drilling additional holes, eventually making an opening large enough to insert a ladder and help the men climb out.

The Golden Ray is now stuck in the shipping channel, closing one of the busiest U.S. seaports for shipping automobiles. One ship is unable to leave port and four more are lined up outside waiting to come in, according to ship-tracking website Marine Traffic.

A statement issued Monday by the South Korea foreign ministry said the crew members were isolated in an engine room. It said 10 South Koreans and 13 Filipinos had been on board, along with a U.S. harbor pilot, when the ship began tilting.

Position records for the Golden Ray show the ship arrived in port in Brunswick Saturday evening after making the short sail from a prior stop in Jacksonville, Florida. The ship then departed the dock in Brunswick shortly after midnight and was underway only 23 minutes before its movement stopped in the mouth of the harbor where it capsized, according to satellite data recorded by Marine Traffic.

The Coast Guard said it was notified of the capsized vessel by a 911 call at about 2 a.m. Sunday.

The cause of the capsizing remains under investigation. Marine Traffic shows the Golden Ray overturned as it was passed by another car carrier entering St. Simons Sound.

At the time, the skies were clear and the weather calm, with a southerly breeze of only 5 miles per hour, according to National Weather Service records.

Many of those rescued were taken to the International Seafarers’ Center in Brunswick. Sailors arrived with only what they were wearing when rescued.

A restaurant donated a meal, and the volunteer-run center provided the seamen with clothes, toiletries and Bibles. A priest said Mass for the sailors Sunday afternoon before they were taken to a hotel.

“They were all in relatively good spirits,” said the center’s executive director, Vicki West. “We just do anything we can to be their little respite in the storm.”

The ship channel is currently closed to vessel traffic, with a safety zone of a half mile around the Golden Ray in the sound.

The vessel is owned by Hyundai Glovis, which carries cars for automakers Hyundai and Kia as well as others.

Nearly 614,000 vehicles and heavy machinery units moved across Brunswick’s docks in the 2019 fiscal year that ended June 30, according to the Georgia Ports Authority. 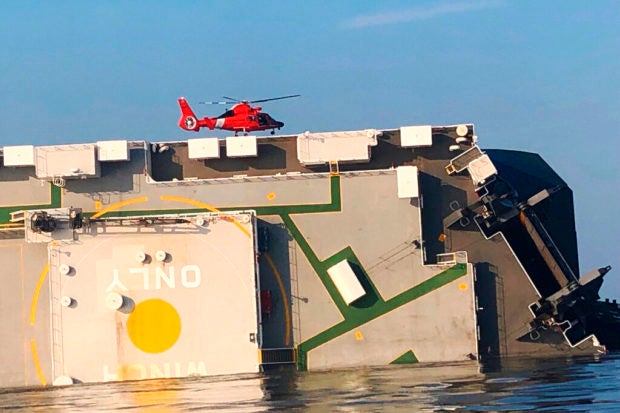