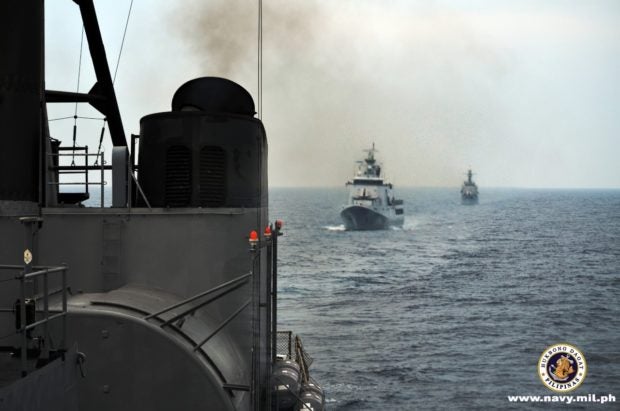 Philippines, Vietnam and Brunei navies hold maritime drills near the South China Sea while en route to the first ever Asean-US maritime exercises. (Photo courtesy of the Philippine Navy)

MANILA, Philippines — The Philippines conducted naval drills with Vietnam and Brunei in the waters adjacent to the South China Sea, while en route to the site of the first-ever maritime exercises between the Association of Southeast Nations (Asean) and the United States.

The Philippines, Brunei and Vietnam are three of the four members of the Asean that have claims in the South China Sea, a strategic waterway where the US and China are battling for influence. The fourth is Malaysia.

The Philippine Navy’s BRP Ramon Alcaraz (PS-16), an offshore patrol vessel, linked up with the Royal Brunei Navy’s KDB Darulaman near Kingston Shoal in the Spratly Islands last Monday before they sailed together to meet HQ-18 of Vietnam’s People Navy in the waters near Hon Khoai, the southernmost point of Vietnam and close to the South China Sea.

The three navy vessels will form as one of the combined task group in the exercises where the Philippine Navy headed by Capt. Hilarion Cesista will be the designated task group commander, he said.

The 10-member Asean and the US kicked off the inaugural joint exercises at a Royal Thai Navy base in Sattahip, Thailand on Monday.

The maritime drills will be carried out over the next few days in the Gulf of Thailand to the South China Sea before it concludes in Singapore.

The Asean and US navies will operate together and execute a variety of realistic scenarios designed to reinforce interoperability in areas such as visit, board, search and seizure, maritime domain awareness, division tactics and maritime asset tracking.

“The Navy will be benefited from this because they will be operating with other navies as far as maritime safety and security is concerned. It also promotes exercise of freedom of navigation and overflight and unimpeded commerce,” chief of naval staff Rear Adm. Loumer Bernabe said during the send-off ceremony for the Philippine participants last week.

This is the first time that the Asean will be holding a joint exercise with the US as a regional bloc. Last year, Asean conducted maritime drills with China, despite conflicting interests with four Southeast Asian claimants over the South China Sea.

They are unfolding as a Chinese survey ship remains in waters claimed by Vietnam, prompting the Pentagon last week to accuse Beijing of efforts to “violate the rules-based international order throughout the Indo-Pacific.”

It also comes as Chinese warships and survey vessels sail through Philippine waters in recent months without permission.

China claims the majority of the South China Sea, often invoking its so-called nine-dash line as a supposed historic justification to the waters, which are a key global shipping route.

For the US, the joint exercises have nothing to do with China’s growing military might and economic influence in the region.

“The exercise is not focused or dedicated against or towards anyone else. It’s to enhance the skills of Asean and the US working together,” Rear Adm. Murray Joe Tynch, commander of US Navy’s Logistics Group of the Western Pacific, told reporters in a telephone briefing Tuesday.

“The challenges we face in the maritime domain extend beyond what any single nation can handle, and that’s where partners and allies are force multipliers for peace and interoperability,” he said. “That’s an unparalleled advantage that no competitor or rival can match. I fully believe we are stronger when we sail together.” With Agence France-Presse