PH, Brunei, Vietnam navies to sail together ahead of Asean-US exercises 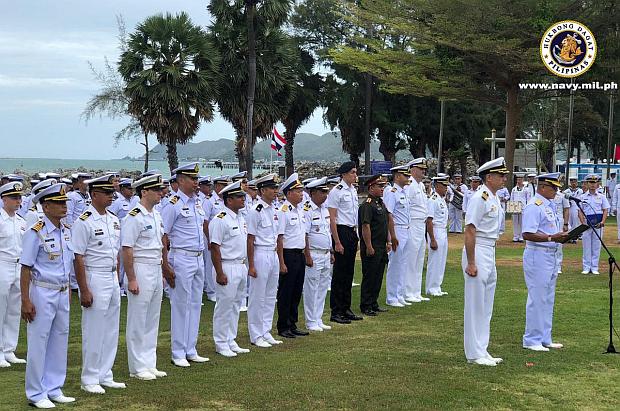 MANILA, Philippines — The Philippine contingent for the first Association of Southeast Asian Nations (Asean)-United States maritime drills in Thailand will lead a trilateral sail with ships from counterparts from the Royal Brunei Navy and Vietnam People’s Navy ahead of the exercises.

“As of this writing, the participating Philippine Navy vessel, BRP Ramon Alcaraz (PS-16), carrying the components of Naval Task Group 80.5 is currently in lead of a trilateral sail with ships from Royal Brunei Navy and Vietnam People’s Navy going to the designated exercise area,” Navy Task Group 80.5 commander Capt. Hilarion Cesista said in a statement issued on Monday evening.

The Philippines, Brunei and Vietnam are three of the four members of the Asean that have claims in the South China Sea, a strategic waterway where US and China are battling for influence.

The 10-member Asean and the US kicked off the inaugural naval exercises at the Royal Thai Navy headquarters in Sattahip, Thailand on Monday. The Philippine Navy was represented by Fleet-Marine Ready Force commander Commo. Toribio Adaci Jr.

Co-led by the navies Thailand and US, the exercises will be carried out in the “international waters in Southeast Asia, including the Gulf of Thailand and South China Sea” before concluding in Singapore, the US Navy’s Pacific Fleet said in a statement.

The exercises, set to take place from Sept. 2 to 6, will include eight warships and four aircraft from seven countries, and more than a thousand personnel that represent all 10 Asean member states and the US.

This is the first time that the Asean will be holding a joint exercise with the US as a regional bloc. Last year, Asean conducted maritime drills with China, despite conflicting interests with four Southeast Asian claimants over the South China Sea.

Throughout the exercise, ASEAN member states and US forces will operate together under a combined task force structure, executing a variety of realistic scenarios designed to reinforce interoperability in areas such as visit, board, search and seizure, maritime domain awareness, division tactics and maritime asset tracking, the 7th Fleet said.

“AUMX builds greater maritime security on the strength of Asean, the strength of our navy-to-navy bonds, and the strength our shared belief in a free and open Indo-Pacific,” Rear Adm. Joey Tynch, commander of Task Force 73 was quoted as saying.