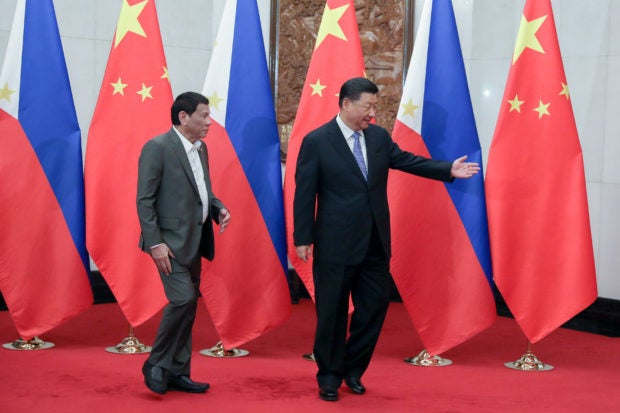 COMPLEX RELATIONS As he earlier announced, President Duterte raised the 2016 international arbitral decision favoring the Philippines in the South China Sea dispute, when he met on Thursday with Chinese leader Xi Jinping who stood firm on Beijing’s rejection of the ruling. —MALACAÑANG PHOTO

Panelo also said Mr. Duterte will no longer raise this matter in future meetings with Xi.

Mr. Duterte, who is on a five-day visit here, took up in his meeting with Xi on Thursday night the 2016 ruling by the international arbitral tribunal in The Hague, which favored the Philippines in its maritime dispute with China over the West Philippine Sea.

‘In a friendly manner’

The dispute, formally brought to tribunal by the administration of then President Benigno Aquino III, involved the Philippines’ assertion of its exclusive economic zone against China’s sweeping claim over the South China Sea.

Malacañang had announced ahead of Mr. Duterte’s visit that he would bring up this matter with his Chinese counterpart. Presidential spokesperson Salvador Panelo told a press briefing on Friday, “The President unequivocally, assertively, but [in a] friendly [manner], asserted the arbitral ruling [in the bilateral meeting between the two leaders on Thursday].”

“He [Mr. Duterte] said that the arbitral award is final, binding and not subject to appeal,” Panelo said, adding that Xi “reiterated his government’s position of not recognizing the arbitral ruling as well as not budging from its position.”

According to Panelo, the two leaders understood that their contrasting views on the arbitral ruling should not hinder the two nations in their pursuit of security and economic cooperation, and in further improving relations.

“What they have agreed upon is that both countries will refrain or avoid performing aggressive, provocative acts that will trigger incidents that have [happened] before,” Panelo said.

“What has been touched upon was the self-restraint imposed by the two governments unto themselves not to perform acts that could trigger any hostilities within the area,” he added.

Asked what actions could be regarded as provocative acts, he said these included the unauthorized entry of Chinese warships in Philippine waters, the harassment of Filipino fishermen by the Chinese and the presence of Chinese fishing vessels in the West Philippine Sea.

‘We have already raised it’

Regarding to the construction of additional Chinese military structures in disputed areas, Panelo said he was not sure if these were aggressive acts since the Philippines was also building structures in contested areas.

He said that Xi’s firm stance on the matter was a signal for the President to stop bringing it up in their future meetings.

“No more. We have already raised it. We will not raise it repeatedly,” Panelo said.

“They both agreed after that, that the issue of conflict should not be the sum total of the relationship between the two countries and that they should move forward, but at the same time continue with the dialogue peacefully on that issue,” he said.

Panelo said that while they had differences in “10 percent” of their relations, China and the Philippines could work together in improving the remaining “90 percent.”

Although Mr. Duterte failed to sway Xi in changing his position on the arbitral ruling, Panelo would not describe the President’s eighth meeting with the Chinese leader as a failure.

“As the President himself described it, the dialogue or the bilateral meeting between [the] two countries went very well,” he said.

Reminded that the arbitral decision and the resolution of the maritime dispute were central to having joint developments in the South China Sea, he said: “Not necessarily. The fact is we have other areas—trade relations, the people-to-people exchange, cultural exchange and the tourism aspect. There’s a lot.”

He, however, acknowledged the “stalemate” on the joint developments in the West Philippine Sea after the Philippine government issued a moratorium on the implementation of awarded service contracts in 2015.

“There is an impasse because we cannot agree what portion [of that region] can be accessed by the two countries,” Panelo said.

A little too late

Opposition lawmakers were unimpressed with President Duterte’s assertion of the 2016 arbitral ruling, saying he must demand more from China, such as stopping its militarization of the South China Sea.

In a statement, Bayan Muna Rep. Carlos Zarate said Mr. Duterte’s invoking the arbitral ruling on his fifth visit to China “is a little too late as China is now well entrenched in these reefs [in the disputed sea].”

“While this turnaround may be a little too late, at least we can now start reclaiming our dignity after we were humiliated by China since Duterte came to power,” Zarate added.

“However, we can still regain these reefs if we manage to gather the support of the international community to demand the complete demilitarization of the South China Sea.”

Gabriela Rep. Arlene Brosas said, “The lives of millions of Filipinos are already at stake when he signed yet again a series of loans and agreements with China despite President Xi’s rejection on the country’s landmark win in the international arbitral court.” —WITH A REPORT FROM DJ YAP

Read Next
Panelo: Duterte asked sanctions vs Chinese crew
EDITORS' PICK
Current dominant strain of COVID-19 more infectious than original—study
Water remains our saving grace right now
EuroMillions Superdraw: A lottery draw unlike any other is coming to the Philippines
DOLE: Return of OFWs’ remains from Saudi to be ‘delayed,’ deadline moved to ‘early next week’
Smart releases Hyun Bin’s second TVC
‘Justice will be done,’ Duterte assures as he vowed probe on Jolo incident to bare ‘truth’
MOST READ
Duterte tells military: No other president looked at you the way I did
Locsin warns of ‘severest response’ if China’s army drills in SCS ‘spill over’ to PH domain
Man who stole 2 cans of luncheon meat lands in jail in Manila
VP Leni Robredo: ‘Remember, you were made for these times’
Don't miss out on the latest news and information.