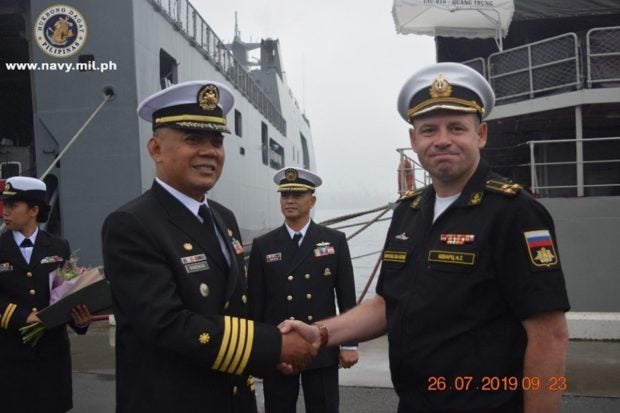 MANILA, Philippines — The Philippine Navy, which recently made a port call in Vladivostok, Russia, has expressed satisfaction over the thriving relations with its Russian counterpart.

“We are upbeat with the growing relationship of Russia and our country,” Navy chief Vice Adm. Robert Empedrad said Tuesday.

The BRP Davao del Sur (LD-602) participated in the Russian Navy Day celebration in Vladivostok in late July. While on its way home, it fetched the Navy’s newly-acquired asset BRP Conrado Yap (PS-39) in South Korea.

The two ships were welcomed home in a ceremony at Manila’s South Harbor.

This was the second time that the Philippine Navy sent a ship to Vladivostok. Last year, it sent a 440-man contingent aboard BRP Tarlac (LD-601) for a historic port visit.

Empedrad said that in the last three years, the Russian Navy has made a port call to the Philippines for six times.

“This is part of our naval diplomacy with our neighboring countries in the region,” said Capt. Richard Gonzaga, commander of Naval Task Group 80.5, who led the Philippine delegation to Russia.

“We don’t do this before. So we are very proud to have done this, to go to farther places and to show the flag to our neighbors,” said Cmdr. Homer Gonzales, commanding officer of BRP Davao del Sur.

A naval cooperation agreement between Philippine and Russia navies may be signed this November. The agreement includes more port visits, training exchanges, and security consultations.

The Philippine contingent was not spared from big waves on its way home to Manila.

“It was a challenge not only for the crew but the members of Naval Task Group,” he said.

But he said it was a learning experience especially for the students onboard. “It’s a firsthand experience for them on how to live at sea.”

The ship was also shadowed by a Chinese naval vessel when they passed through China’s waters while en route to Manila.

“They just asked if we needed assistance or anything, which is common to all navies,” Gonzaga said.  /muf