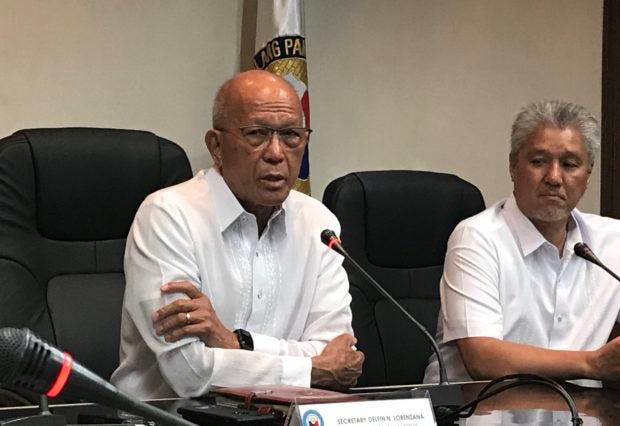 MANILA, Philippines — Defense Secretary Delfin Lorenzana on Sunday shot back at Chinese Ambassador Zhao Jianhua for saying that overseas Filipino workers in China may be accused of spying, after the former raised concerns that the China-manned gambling centers, or Philippine offshore gaming operators (POGOs), near major military camps may shift their operations to spying.

“That’s the most preposterous statement I heard in a long while,” he said in a statement to the media.

Lorenzana said POGO workers in the Philippines could not be compared to OFWs in China with legitimate visas.

“POGO workers here are not comparable to OFWs in China. POGO workers came over for a different purpose, e.g., likely just tourism, but eventually got visas to work in an activity at the POGO centers operating gambling operations which is prohibited in China,” he said.

“The OFWs go to China for specific work that’s legitimate there with Chinese visas. They are more like Chinese nationals working in construction projects here in the Philippines, as mutually agreed upon by both countries,” he added.

On Saturday, Presidential spokesperson Salvador Panelo said that Zhao texted him about Lorenzana’s earlier concerns on Pogos near military camps, saying it wouldn’t be fair if Beijing would also be suspicious of Filipinos in China.

“Ambassador Zhao sent me a text. He said, ‘What if we also think that your overseas workers are also spying on us. What can you say about that?’” Panelo said.

According to Lorenzana, Filipinos in China are “widely dispersed” and are nowhere near military camps.

“There are no POGO-like centers in China that can be operated purely by Filipinos near Chinese military camps. Besides, Filipinos are widely dispersed in China, working in homes and schools that are far away from military camps,” he said.

While the location of the POGOs here might be coincidental because these were the only facilities available or offered, Lorenzana said that Chinese companies could be compelled by their government to assist in intel collection.

“It could be just coincidental because these were the only facilities offered for POGO Operations and I believe that the POGO workers are here just for work only. What I am alarmed is the potential that they could be tapped for info gathering purposes,” he said.

“Knowing that Chinese companies are mandated by the Chinese government to assist in intel collection for their government, it is not far fetched that individuals, likewise, could be compelled to do so,” he said.

The defense chief earlier said that he backed the proposal of putting up exclusive hubs for Pogos and it should be moved away from military camps.

Read Next
Envoy to Panelo: What if China suspects OFWs of spying, too?
EDITORS' PICK
SM prepares for ‘safe malling’
LIST: What to expect in areas under GCQ, MGCQ
DOTr bares 2 phases of public transport revival in GCQ areas
Notice of 2020 regular meeting of stockholders June 18, 2020
Leveling up your ‘lutong bahay’ with the kitchen companion you never knew you needed
Drilon wants repeal of penal provisions in proposed Bayanihan extension law
MOST READ
DOH explains: Only 109 of record-high 539 COVID-19 patients were ‘fresh cases’
LIST: What to expect in areas under GCQ, MGCQ
DOH to separate numbers of fresh COVID-19 cases from backlog
Duterte approves Metro Manila’s shift to GCQ starting June 1
Don't miss out on the latest news and information.