Palace: Chinese warships in PH waters ‘not an act of friendship’ 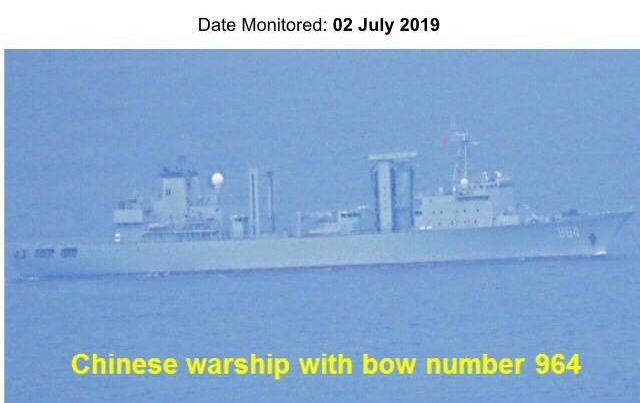 The reported presence of Chinese warships in Philippine waters without any coordination with Manila is “not an act of friendship,” Malacañang said on Thursday.

The Palace expressed concern over a military report that five more Chinese warships were recently spotted at Sibutu Strait in southern Philippines.

“We express concern with that kind of incident. Because if they keep on saying that we’re friends, I don’t think this is an act of friendship,” said presidential spokesperson Salvador Panelo in a press briefing.

“It’s a violation of the  United Nations Convention on the Law of the Sea since (the ships) passed through our exclusive economic zone. I’m sure the Department of Foreign Affairs secretary (Teodoro Locsin Jr.) will do something about that,” Panelo said.

“We will call (China’s) attention. The Chinese ambassador (Zhao Jianhua) has invited me for dinner… one of these days. Maybe I will raise that (with) him,” he added.

The Palace official was reacting to a military report that two Chinese warships were spotted at Sibutu Strait in Tawi-Tawi in July, and three more ships in August.

In July, Lorenzana said Zhao assured him the Chinese Navy would inform Manila if their warships were in Philippine waters.

President Duterte is scheduled to visit Beijing in the coming weeks to push for a long-anticipated code of conduct to diffuse maritime tensions between China and a number of member-states of the Association of Southeast Asian Nations.

Aside from bringing up Chi na’s proposed joint oil exploration activities with the Philippines in the South China Sea, the President also said previously that he would raise the 2016 arbitral ruling that invalidated Beijing’s claim to the disputed maritime areas, saying it was about time he did so.

Zhao, however, said that China would continue with its stand rejecting the ruling.

Panelo said China’s remarks would not change Manila’s position on the ruling as well.

“The President similarly, will not alter his position on the matter (just as) the Chinese government says it will not,” he said.

Panelo added:  “But it doesn’t mean that, as friends, we cannot discuss the issue.  It has to be discussed, that’s why there is a mechanism for negotiation.”

Said Panelo: “There are things we can agree on, and differences that we may not. But that does not preclude both countries raising the issue and discussing it amicably.”