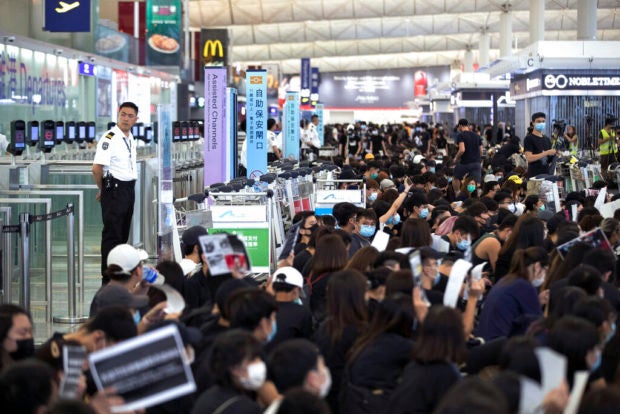 Airport security personnel look on as protesters using luggage trolleys to block the departure gates during a demonstration at the Airport in Hong Kong, Tuesday, Aug. 13, 2019. Protesters severely crippled operations at Hong Kong’s international airport for a second day Tuesday, forcing authorities to cancel all remaining flights out of the city after demonstrators took over the terminals as part of their push for democratic reforms. (AP Photo/Vincent Thian)

MANILA, Philippines — Malacañang on Tuesday advised Filipinos to avoid traveling to Hong Kong temporarily because of massive protests that shut down the semiautonomous city’s airport for a second day.

“[I]f you want to go to Hong Kong, this is not the right time to go there because your flight might get suddenly canceled,” presidential spokesperson Salvador Panelo said.

“It’s chaotic there at the airport. Although it’s limited to the airport,” Panelo said.

He, however, said there was no reason for the government to ban travel to Hong Kong.

Thousands of protesters took over Hong Kong airport’s main terminal on Monday, an escalation of a summer of demonstrations that led to the cancellation of more than 200 flights.

The central government in Beijing ominously characterized the protest movement as something approaching “terrorism” that posed an “existential threat” to the local citizenry.

Hong Kong leader Carrie Lam warned on Tuesday of the dangerous consequences facing the city, one of Asia’s most important financial hubs, if escalating violence at the rallies was not curbed.

“Violence, no matter if it’s using violence or condoning violence, will push Hong Kong down a path of no return, will plunge Hong Kong society into a very worrying and dangerous situation,” Lam said.

“The situation in Hong Kong in the past week has made me very worried that we have reached this dangerous situation,” she added.

Lam, who faced fierce questioning from local reporters and at one point appeared to be on the verge of tears, appealed for calm.

“Take a minute to think, look at our city, our home, do you all really want to see it pushed into an abyss?” she said, although she again refused to make any concessions to the protesters.

In the city of Shenzhen, paramilitary police were assembling across the border for exercises in what some saw as a threat to increase force brought against the mostly young protesters who have turned out in thousands over the past 10 weeks to demand democratic reform.

The demonstrators have shown no sign of letting up on their campaign to force Lam’s administration to respond to their demands, including that she step down and entirely scrap legislation that could have seen criminal suspects sent to mainland China to face torture and unfair or politically charged trials.

No new violence was reported overnight, although the city was on edge after near-daily and increasingly bloody confrontations between protesters and police.

At the airport, one of the busiest in the world, airlines tried to resume operations on Tuesday, but thousands of protesters returned, threatening another day of flight cancellations.

After filling up the arrivals hall, demonstrators streamed into the departures area despite increased security measures designed to keep them out.

The black-clad protesters held up signs to appeal to travelers from mainland China and other parts of the world.

“Democracy is a good thing,” said one sign in Simplified Chinese characters, which are used in mainland China instead of the Traditional Chinese script of Hong Kong.

By late afternoon, one entrance to the immigration area had been entirely blocked by protesters and arriving passengers were struggling to get through.

The day ended with airport authorities canceling all flights.

“Airport operations at Hong Kong International Airport have been seriously disrupted, all departure flights have been canceled,” a statement on the airport website said.

“All passengers are advised to leave the terminal buildings as soon as possible,” it said.

The statement did not immediately make clear if flights were still arriving.—Reports from Julie M. Aurelio, AP and AFP