Educating the educators: US provides training to Biñan English teachers 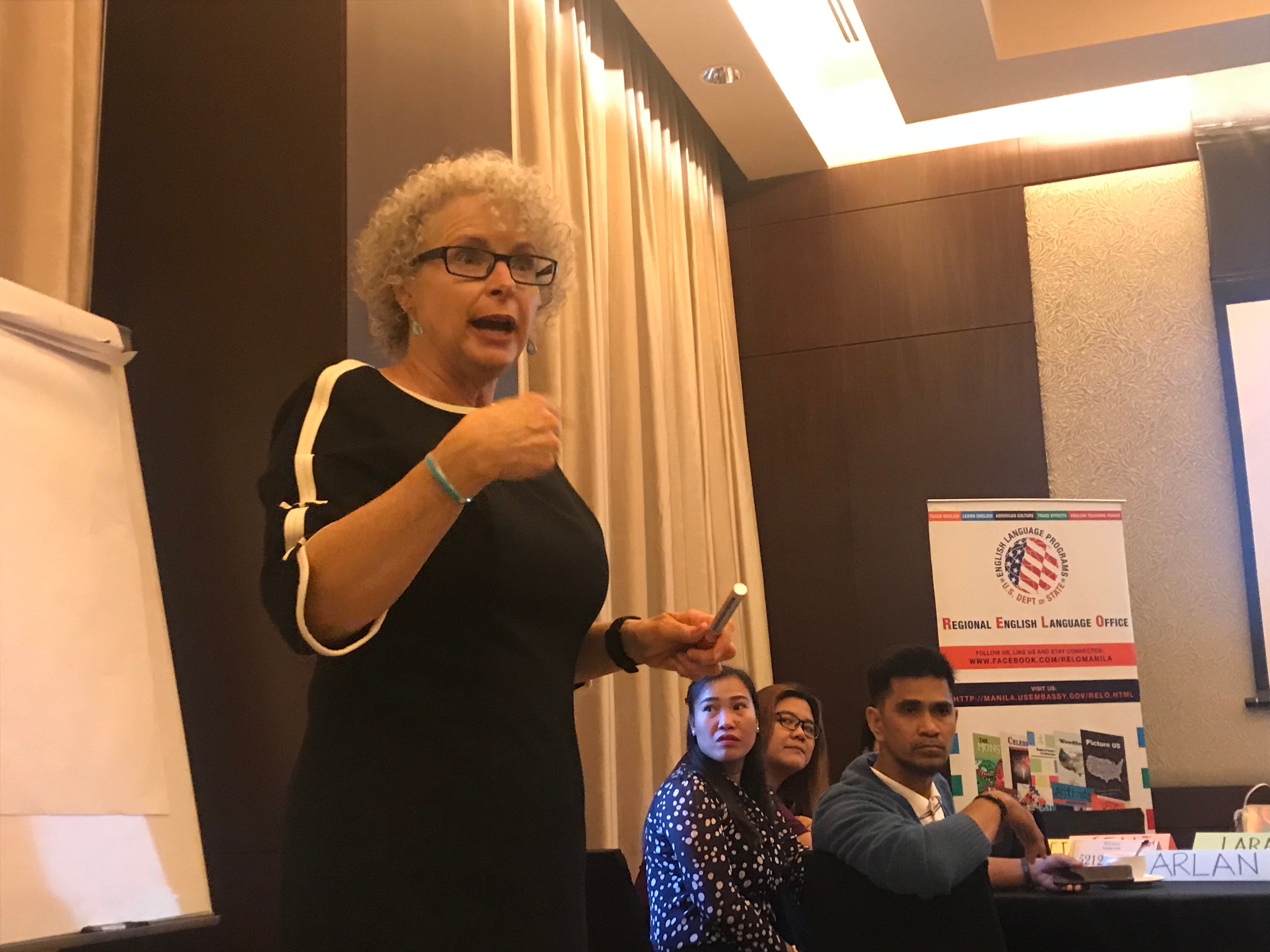 Amy Christensen, an English teacher at the Central New Mexico Community College in the US, explains the instructions for the next training activity during one of the series of workshops for english teachers from public schools in Biñan, Laguna. INQUIRER.net / Christia Marie Ramos

MANILA, Philippines — English teachers from Biñan, Laguna took on the role of students during a series of workshops aim to further equip them with modern and collaborative teaching methods.

More than a hundred teachers, divided into four batches, participated in a series of workshops hosted by the Regional English Language Office of the United States Embassy in Manila, which started on July 29 and lasted until Friday. English teachers from Biñan, Laguna absorb learning during one of the series of training workshops hosted by the Regional English Language Office of the United States Embassy in Manila from July 29 to August 9, 2019. INQUIRER.net / Christia Marie Ramos

“There’s a large group of us in the United States who go out to provide english language training and we do the training based upon the needs of the local community,” Amy Christensen, an English teacher at the Central New Mexico Community College, told INQUIRER.net in an interview during one of the series of workshops held in Alabang.

Christensen, who led the training workshops, is a participant in the US Department of State’s English Language Specialist Program promoting professional development of English teachers.

“Most of the activities that I’m doing are collaborative activities and activities that promote active learning in the classroom. I think everybody in the world is moving from kind of a teacher-centered lecture style classroom to more where the students are the focus and they’re more actively involved in their own learning,” she further said.

Patrick James Pelicano, an English teacher from the Biñan Secondary School of Applied Academics and one of the participants, said the series of trainings helped them learn “how to include and involve students in the learning landscape.”

“As English teachers here in the Philippines, we encounter different problems in teaching english to the students, specifically grammar and reading. So with this seminar, we are able to get different insights on how to teach different lessons in an easy way, in the most dynamic [and] most active way that the teachers could do,” he said.

According to the embassy’s Regional English Language Officer, Harold Samuels, the goal of the training program was “to help the students” acquire the highest quality of education through training the teachers themselves.

“What we try to do is to build on what the teachers already know,” he added.

Christensen expressed hoped that what the teachers had learned throughout the course of the training program would be reflected once they go back to their own classrooms.

“So far I’ve heard some pretty good feedback that they’ve liked what I’ve been presenting [and] that they’ll actually be able to use these activities in their classroom so they’re not just theory and you know research, and that they’re actually implementable in the classroom,” she said.

“So what I’m hoping [is that] the teachers will go back to their school…and be able to implement these activities that we’ve been practicing in the workshop with their students,” she added.

Samuels, meanwhile, noted that this program has reached teachers from different parts of the country as well.

“We’ve done this program not only for Biñan teachers but also teachers from Bataan, from Cavite, from Pangasinan and also from Metro Manila. We have other program which is for full academic year, for 10 months. We’ve had our trainers work with teachers in Iloilo…and we’re sending another teacher to Tacloban. So we try to reach as many different regions as we possibly can,” he said.

“We’ll try to reach as many regions as we can and we’re just moving step by step from one region to another,” he added. /jpv