PH-based 8chan owner heading to US as lawmakers seek answers 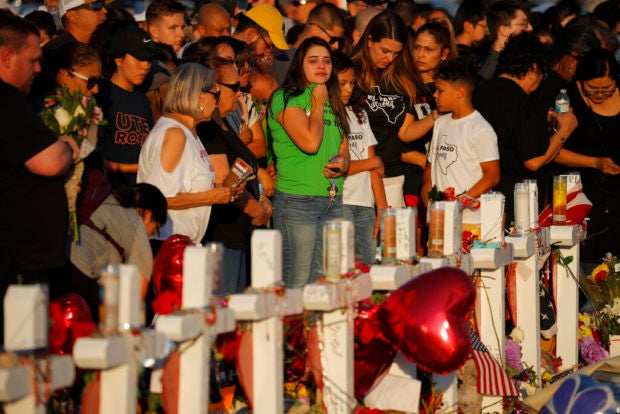 People visit a makeshift memorial at the scene of a mass shooting at a shopping complex, Tuesday, Aug. 6, 2019, in El Paso, Texas. (AP)

BOSTON — The owner of the online message board 8chan says he’s headed shortly to the United States, where lawmakers want to question him on his site’s use as a megaphone by violent white supremacists.

Jim Watkins, who lives in the Philippines, did not specifically say he would testify, but he tweeted portions of an email he said he had sent Tuesday to House Homeland Security Committee leaders expressing willingness to speak by phone. The committee wants him to testify on what he has done to prevent the site from being used by extremists.

8chan was effectively knocked offline Monday after two companies cut off vital technical services in response to word that the gunman who killed 22 people at an El Paso, Texas, Walmart on Saturday posted a racist anti-Latino “manifesto” to 8chan just before the murders.

8chan was already well-known for trafficking in anonymous hate speech and incitement of hate crimes. Gunmen who committed similar massacres this year at two New Zealand mosques and a Poway, California, synagogue also posted there.

In a video he released on Tuesday, Watkins said 8chan was fully cooperating with law enforcement.

He also said that the El Paso shooter had first posted his hate-filled manifesto to Instagram and that someone else had re-posted it to 8chan. Available evidence contradicts Watkins’ claim.

The manifesto, a PDF file containing the shooter’s name, was posted to 8chan before first reports of the massacre — and before his name was publicly known. “I’m probably going to die today,” says the posting to which it was attached. The shooter surrendered to police after the killings.

8chan remained unreachable on the web on Wednesday. Its administrator tweeted Tuesday that he was moving the site onto the darknet, an online corner of the internet hidden from normal browsing where illicit drugs are sold and criminals trade stolen credit card data. That would make it significantly more cumbersome to access — and unappealing for mass use.

The site was knocked offline after the security company Cloudflare said it was cutting it off from protection from denial-of-service attacks, for being “a cesspool of hate.”

8chan quickly found new online backers in Washington state-based Epik.com and its BitMitigate security service. But on Monday, the company that provided them with computer servers and other technical underpinnings, London-based Voxility, upended both Epik and BitMitigate by terminating its contract with them.