MANILA, Philippines – Six more Filipinos and a Thai national have been evacuated from Libya and are on their way to Tunisia, the Philippine Embassy in Tripoli said Tuesday. 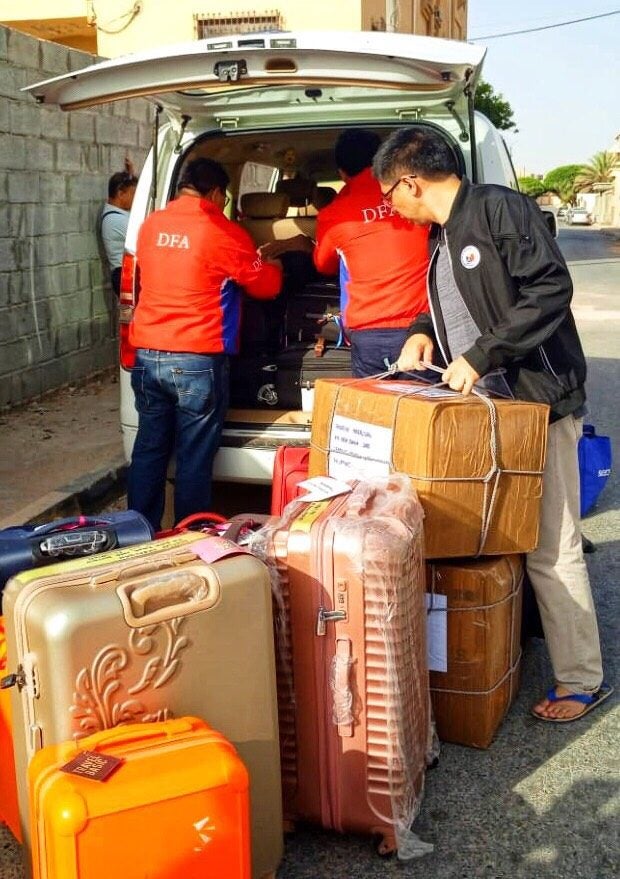 PACKED AND READY TO GO – Philippine Embassy in Libya staff members help load the luggage of the six Filipinos and one Thai national who opted to evacuate from Tripoli due to continued skirmishes.  (Photo courtesy of Maria Christina Cecelia Hernandez/Philippine Embassy in Tripoli)

In a statement, the embassy said a total of  99 Filipinos have so far availed of the government’s repatriation program since fighting broke out in and around the Libyan capital last April 4.

The Thai national is married to one of the six Filipinos, the embassy said.

Philippine Embassy in Tripoli Chargé d’Affaires Elmer Cato said the assistance extended to the Thai national “was in line with the instructions” of Foreign Affairs Secretary Teodoro Locsin, Jr., for the embassy “to open its doors to distressed nationals from other Southeast Asian countries.”

Cato said the Thai national was provided with food and shelter while awaiting evacuation.

The embassy also facilitated the issuance of his exit and transit visas, he added.

Three other Filipinos, he said, have requested the assistance of the embassy and will be repatriated as soon as Libyan authorities issue their exit visas.

Cato likewise, reiterated that the embassy is ready to assist the remaining Filipinos in Tripoli who may want to be repatriated as well as those who were displaced by the ongoing fighting. / gsg