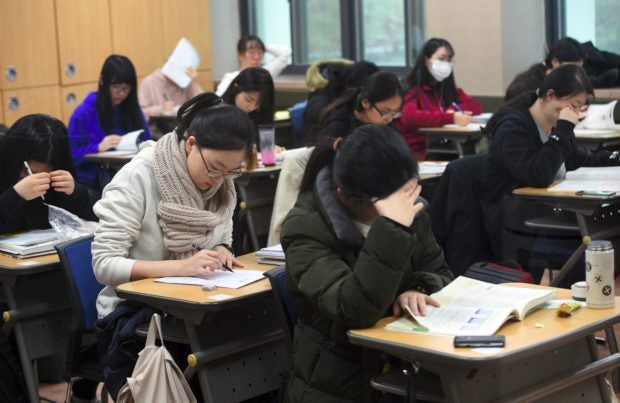 Students prepare to take the annual College Scholastic Ability Test, a standardized exam for college entrance, at a high school in Seoul in this November 2017 file photo. School bullying is directly related to more than half of suicide cases in South Korea. (AFP)

MANILA, Philippines–A campaigner who tackles youth suicide in South Korea, two journalists, and a human rights activist were named Friday among the winners of Asia’s equivalent of the Nobel Prize, the Ramon Magsaysay Award.

Kim Jong-ki, whose 16-year-old son took his life after being bullied in school, received the 2019 award for helping South Korea face one of the developed world’s highest suicide rates.

Kim, 72, was recognized for “his quiet courage in transforming private grief into a mission to protect Korea’s youth from the scourge of bullying and violence”, the Manila-based award foundation said in a statement.

Over 24 years, Kim’s Foundation for Preventing Youth Violence has carried out wide-ranging anti-bullying campaigns, run a hotline that now takes up to 50 calls a day, introduced counselling and mediation, and lobbied the government for new policy and laws.

Suicide was the second leading cause of death among teenagers in South Korea as recently as 2005, with school bullying directly related to more than half of the cases, the award foundation added.

Neelapaijit, 63, is the widow of a prominent human rights lawyer who was abducted and later murdered after publicly accusing the military of torturing detainees in the troubled Muslim region of southern Thailand.

The former housewife took up her late husband’s cause and established the Justice for Peace Foundation to document the situation in the area, provide legal aid to victims, and put pressure on the government to act on human rights cases.

Neelapaijit, who later served as commissioner of the National Human Rights Commission of Thailand, was cited for “her systematic, unflagging work to reform a flawed and unfair legal system”.

Ko Swe Win, 41, is the editor of the Myanmar Now, an independent online news service known for its well-researched, in-depth articles on the country’s under-reported human rights and social justice issues, the award foundation said.

“The effort to build a strong, independent and socially responsible press has to contend with draconian laws, rabid intolerance, repression and persecution,” it added.

The editor spent seven years in prison as a young man, where he endured torture and starvation for taking part in student protests against the ruling military junta.

India’s Ravish Kumar, 47, is the host of NDTV India’s “Prime Time” program that sheds light on Indian society’s under-reported problems and who has endured harassment and threats for calling the country’s highest officials to account.

Cayabyab, 65, was recognized for “his compositions and performances that have defined and inspired Filipino popular music across generations”.

The annual award, widely considered Asia’s version of the Nobel Prize, is named for the Filipino president who died in a 1957 plane crash. This year’s winners will receive a cash prize and a medallion at a Manila ceremony on September 9.