‘Garbage Without Borders’ — Lessons from Duterte’s waste war on Canada 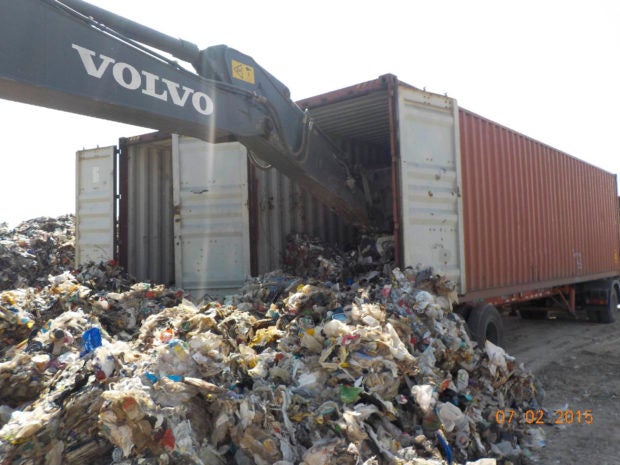 Part of the Canadian trash that officials say was illegally shipped to Manila years ago ended up in a landfill in Capas, Tarlac province, in this July 2, 2015, photo. (Photo from Metro Clark Waste Management Corp.)

COLOMBO — One-time top government trade negotiator Gomi Senadhira, yesterday, called for tangible measures to solve the importation of the British garbage to Sri Lanka. Senedhira, who had previously warned the government of dire consequences of importing of garbage of all sorts in accordance with the Sri Lanka-Singapore Free Trade Agreement (SL-SFTA) said tough measures were required. Senadhira expressed his views in the wake of Finance Minister Mangala Samaraweera revealing in Parliament last Friday UK garbage imports began in 2017.

“Stop the controversial process now or face an unprecedented crisis,” Senadhira, who served successive governments over a period of 32 years as a commercial diplomat, told The Island.

Senadhira issued the following statement: “Just three months ago, President Rodrigo Duterte threatened to ‘declare war’ on Canada. The reason was simple – Canadian garbage. Over one hundred containers of them.

“So, in a hard-hitting speech, the president of the Philippines warned “I will declare war against them. I will advise Canada that your garbage is on the way. Prepare a grand reception.” During his speech, the president not only threatened to ship containerloads of garbage back to Canada but also warned that he would dump some of the garbage at Canada’s embassy in Manila. That was tough language, even for Duterte, a man known for using the language of a street fighter than that of a statesman. But then I suppose his frustration is perfectly understandable and it was the time for a tough talk with Canada. Over one hundred shipping containers filled with Canadian garbage had been rotting in a port near Manila, for nearly six years. All the previous attempts to ship them back to Canada had failed.

“Now, we have finally joined the ranks of the garbage importing nations, sorry recycling nations, and with over one hundred containers filled with British garbage rotting in our port, most for nearly two years, it is easy to recognize the eerie similarities between the two situations. Given the predicament we are in there are important lessons to be learned from the Filipino experience with the garbage without borders. So, let me briefly sum up what happened in the Philippines.

“From June 2013 to January 2014 nearly one hundred containers arrived in the Philippines from Canada. Most of them were declared to contain recyclable plastic scrap materials. The containers were not claimed by the consignee and in January 2014 customs opened some of the containers, as part of measures regard to shipment not claimed for a long period, and discovered garbage including, plastic bottles, plastic bags, household garbage, and even used adult diapers. Then the customs decided not to open the rest of the containers as those also may contain hazardous waste.

“All this is very similar to our own experience with imported British garbage. What happened after that?

“In February 2014, just a few weeks after the containers were open the customs filed smuggling complaint against the company which allegedly imported the garbage shipment and its licensed Customs brokers. In March 2014, the Department of Foreign Affairs sent a letter to the Canadian Embassy in the Philippines requesting for assistance in shipping the garbage back to Canada.

“But then, the Canadian government refused to take the garbage back as it “… has no domestic or international authority to compel the shipper to return the shipment to Canada,” and suggested that they “would like to explore with the Philippines options for processing the rest of the shipment – in accordance with Philippine law – in the Philippines.” To make matters worse, then-president Benigno Aquino III did not even discuss the issue of the illegally shipped Canadian garbage when he met with then Canadian Prime Minister Stephen Harper during a state visit in May 2015. Aquino – the scion of a political family, unlike his successor, was a genteel politician and he too believed the issue has to be addressed locally.

“After that nothing, much happened other than the exchange of polite diplomatic notes and dumping of part of the garbage (26 containers) in a local landfill in spite of protests from environmental groups. Towards the end of the year, the new Canadian Prime Minister Justin Trudeau, who visited Manila to attend the Asia-Pacific Economic Cooperation (APEC) summit in November 2015, was also non-committal on the garbage issue as there was “… a problem that needs fixing within our own legislation,” and believed “there are loopholes here that were allowed to be skirted that we need to make sure we close, both for Canada’s interest and for our good relationships with our neighbours.”

“It took Trudeau two more years to agree that it was “theoretically” possible for Canada to bring back the containers as “Those regulations and those impediments (which prevented Canada from taking back the trash) have now been addressed,” … However, he continued to emphasize that there were other issues to iron out – like who will shoulder the costs of shipping back the trash to the country of origin.

“Wheels also turned in the Philippines (though very slowly almost like in Canada). In June 2018 the Office of the Ombudsman ordered the suspension of the Departments of Environment and Natural Resources Undersecretary in connection with the shipment as he had “… acted with gross inexcusable negligence.” In November 2018 they finally appointed a technical working group composed of representatives from the Departments of justice, environment, foreign affairs and customs to resolve the issue.

“Though the governmental wheels turned slowly environment activists and NGOs backed by the international activists and NGOs continued to lobby with Trudeau to take back the garbage as the shipment of garbage violated the Basel Convention on the Control of Transboundary Movement of Hazardous Wastes and their Disposal…a convention, ratified by both Canada and the Philippines. They also continued their demonstrations outside the Canadian embassy.

” But garbage continued to rot in the port. So, by April 2019 President Rodrigo Duterte obviously was at the end of his tether and declared “‘Yung basura ng (The garbage of) Canada, I want a boat prepared. I give a warning to Canada, maybe next week, they better pull their thing up or I will set sail sa (to) Canada, ibuhos ko basura nila doon (I will dump their garbage there), … I’ll declare war against them, isauli ko talaga tingnan mo (I will really return that, you’ll see),… I will advise Canada that your garbage, prepare a grand reception. Eat it if you want to.”

“Having done that, he gave Canada deadline to take back their garbage – May 2019. When Canada rejected it Duterte recalled the Philippine’s Ambassador to Canada and instructed to ship the containers across the Pacific and dump them in Canadian waters, if necessary.

“That solved the problem the garbage left the Philippines on June 1 for a voyage across the Pacific Ocean to Metro Vancouver incinerator.

“The final cost to Canadian taxpayers was C$1.14 million for shipping and another $375,000 for the garbage to be burned in the incinerator. What can we learn from the Filipino experience? What is the way forward?

“Be tough. A threat to ‘declare war’ or to recall the high commissioner may not be required, at this stage. But polite diplomatic notes may not deliver the required result. This is an issue that should be dealt at the highest level – PM to PM. Take action against those who were responsible, including the officials who facilitate such activities. Close the loopholes in our laws, regulations and bilateral agreements (such as FTA with Singapore) that allow garbage to move into Sri Lanka.

Don’t expect the government to solve the problem that they have created. Environmental activists and NGOs need to get involved. Use this opportunity to promote public awareness against the import of garbage. Launch a local and global campaign (with the support of international NGOs and activists) to send the garbage back.