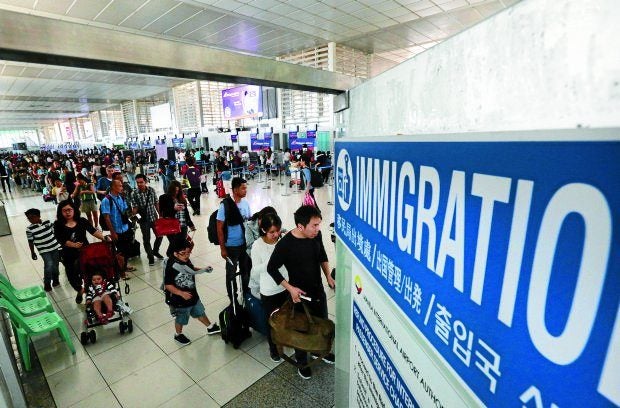 MANILA, Philippines – As many as 2,351 foreigners were denied entry into the country in the first half of 2019, Bureau of Immigration port operations division Chief Grifton Medina said on Monday.

“They were turned back after undergoing primary and secondary inspection by our immigration officers and were declared unfit for admission into our country for a variety of reasons,” Medina said in a statement.

Medina said the aliens were issued exclusion orders and booked on the first available flight to their ports of origin.

He said that 1,920 aliens who flew into the Ninoy Aquino International Airport in Pasay were barred entry into the country while the rest were stopped at the airports in Mactan, Clark, Kalibo, and Davao.

Statistics from the immigration showed that 1,129 Chinese topped the list of barred aliens, followed by 106 Indians, 87 Americans, 52 Taiwanese, and 67 Koreans.

Many of those deported were sex offenders, wanted fugitives, suspected international terrorists, and blacklisted and previously deported aliens.

Some, however, were ordered to return to their point of origin after showing rude and disrespectful behavior towards immigration officers, and for having incomplete travel documents.

Following this, Morente commended BI port personnel for their good work as he stressed the sovereign right of every country to deny entry of suspected undesirable aliens.

“Our immigration officers are working hard day and night to protect our borders from these threats,” said Morente. “We are serious in our drive against illegal aliens, and we are doing the best so we can to stop them from entering the country,” he added.