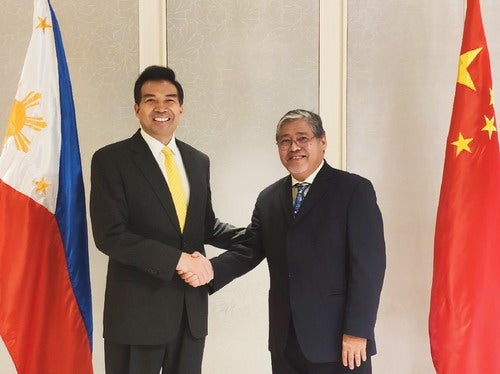 Vice-Foreign Minister Luo Zhaohui meets with Undersecretary of the Philippine Department of Foreign Affairs Enrique A. Manalo in Manila, Philippines, on July 23, 2019. [Photo/fmprc.gov.cn]

China and the Philippines agreed to maintain peace in the South China Sea and carry on friendly ties in the latest talks between their senior diplomats, Beijing said last Friday.

Vice-Foreign Minister Luo Zhaohui and Undersecretary of the Philippine Department of Foreign Affairs Enrique A. Manalo held the 22nd China-Philippines diplomatic consultation in Manila on Tuesday, the first of its kind since the two countries established ties of comprehensive strategic cooperation last year.

The two countries agreed to hold the fifth meeting of the bilateral consultation mechanism on the South China Sea as soon as possible in China, Foreign Ministry spokeswoman Hua Chunying said on Friday. The mechanism was established at the 20th diplomatic consultation in 2017.

They also agreed to work together to manage the situation at sea and promote joint development, Hua said during a daily news conference, adding that China and the Philippines will work together to promote discussions to reach a code of conduct in the South China Sea.

Both sides believed that the situation in the region is stable in general, as a result of their joint efforts as well as those of other countries in the region, and that the momentum for cooperation is increasing, the spokeswoman said.

Another important consensus the two countries gained is that they should continue to deepen cooperation over the Belt and Road Initiative and “be good neighbors, good friends and good partners forever”, Hua said.

Both sides believed that the turn for the better made in bilateral ties in 2016 promoted common development of the two countries as well as contributed to regional development and prosperity, she said.

Ties improved when Philippine President Rodrigo Duterte visited China and the two countries issued a joint statement in October 2016 that said the two countries reaffirmed the importance of addressing their territorial disputes through friendly consultations and negotiations by the sovereign states directly concerned.

The two countries emphasized that they need to make this year’s meetings on East Asia cooperation successful and strengthen the alignment of the Belt and Road Initiative with the Master Plan on Asean Connectivity 2025, Hua said.

China has always supported the central role of the Association of Southeast Asian Nations in regional cooperation, and supports the Philippines in implementing its duty as the coordinator of China-Asean ties, the spokeswoman also said.