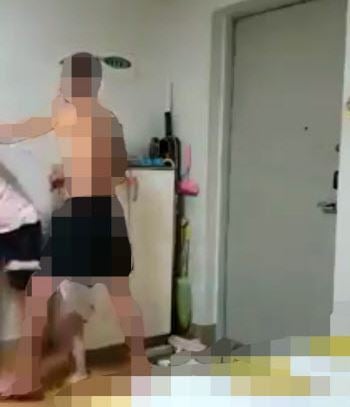 A 36-year-old Korean man beats his Vietnamese wife in front of their 2-year-old son at their home in Yeongan, South Jeolla Province, in video footage that went viral on social media in early July. Yonhap via The Korea Herald

SEOUL — Earlier this month, a video went viral on social media showing a Korean man beating his Vietnamese wife in front of their toddler son during a more than three-hour ordeal at their home in Yeongan, South Jeolla Province.

As he assaults the wife crouched in a corner, the man shouts, “Didn’t I tell you that you are not in Vietnam?” The video also shows the son, 2, crying by his mother’s side.

The wife, who suffered broken ribs, has been moved to a women’s shelter.

On his arrest, the man, 36, told police he hit his wife because she did not speak fluent Korean.

While domestic violence is not limited to marriage migrants, the video cast light on how they could be more vulnerable to domestic violence due to language barriers, lack of social ties and unstable residency status, experts say.

More fundamentally, the problem stems from an uneven relationship based on a lack of awareness of gender equality in society, they say.

Tied to their husbands

As of this month, a total 21 deaths of migrant women by domestic violence have ever been recorded here, according to the Korea Women Migrants Human Rights Center.

“Also, the institutions that restrict marriage migrants from standing on their own feet in Korea and Koreans’ tendency to look down on and discriminate against foreigners from poorer countries are contributing to the problem,” she said.

Most Korean men married to foreign women have paid fees to an international matchmaking agency, which leads to a perception that the woman is the man’s property rather than a human being, Kang pointed out.

Despite regular governmental crackdowns on online advertisements, many agencies openly advertise sexualized photos of marriage candidates. In some cases, they even promise to give a partial refund to men if their foreign wives run away.

Current laws and institutions also work against marriage migrants, making them highly dependent on Korean husbands for their rights to stay in Korea and bring up their children here, according to human rights lawyers.

“Most of the marriage migrants don’t leave the abusive relationship and don’t file complaints when they are abused, for the sake of their children,” said Goh Ji-woon, a lawyer from Immigrants Advocacy Center Gamdong.

They fear they may lose custody of their children to their Korean spouses and may not be able to see the children, as courts tend to award custody to Korean spouses in divorce proceedings, she noted.

Some abusive husbands blackmail their foreign spouses with their power to extend the spouse’s stay in the country.

Under the Immigration Control Act, migrant women who are no longer married can only extend their stay in Korea if their husbands die or go missing, or if they can prove that they were not responsible for the breakdown of the marriage.

Marriage migrants who have custody of their children or parental visitation rights are allowed to stay in Korea after a divorce. Those without children are required to prove that the husband is 100 percent responsible for the breakup to be able to extend the stay here.

The United Nations Committee on the Elimination of Racial Discrimination also highlighted the lack of safeguards for the rights of marriage migrants in Korea and their restricted access to Korean nationality in its periodic review in December.

In a major step for marriage migrants’ rights, the top court earlier this month ruled in a case that a marriage migrant could maintain her residency status after divorcing her Korean husband, even if she was partly responsible for the breakup.

Granting an extension of stay for a marriage migrant only when the ex-spouse is entirely to blame undermines the marriage migrants’ right to seek divorce and allow their Korean partners to exploit the system to mistreat foreign partners, the court said.

“It is a positive step for marriage migrants, especially those who have no children and had to prove that their spouses were fully responsible for the divorce if they wanted to extend their stay in Korea,” Goh said.

Over the past years, the number of international marriages has increased, accounting for 7 to 10 percent of all marriages in the country.

In 2018, 22,698 international marriages took place here, up 8.9 percent from 20,835 the previous year, according to Statistics Korea. The largest portion of foreign spouses came from Vietnam, followed by China and the US.

While the government is making efforts to improve the situation for marriage migrants, activists and lawyers say there is room for improvement, such as tougher punishments for domestic abuse perpetrators. They also demand efforts to raise awareness of racism and promotion of gender equality and changes to current laws that tie marriage migrants to their Korean spouses.

In 2011, the Ministry of Justice abolished a rule that required marriage migrants to submit documents signed by their spouses guaranteeing their identity when they applied for and extended their residency visas.

However, the change is not being properly implemented in the field, leaving marriage migrants at the mercy of their Korean spouses.

“In principle, marriage migrants do not have to present the document signed by Korean spouses. But in reality, the problem is that government officials in the field have too much leeway,” said Lee Jin-hye, a lawyer for Migrants Center Friend.

In some cases, government officials ask marriage migrants to bring along their spouses when they doubt whether their marriage is genuine. Taking advantage of the situation, some husbands have filed reports with police claiming their wives had run away to damage their credibility, she said.

Activists also take issue with the content of the government’s education programs for marriage migrants, calling for an approach with a stronger basis in human rights.

The Ministry of Justice runs a four-hour course for marriage migrants from seven countries, including Vietnam and China, one hour of which is dedicated to teaching them how to resolve conflicts with their Korean spouses and prevent domestic violence.

The Ministry of Gender Equality and Family operates an education program for marriage migrants from Vietnam, the Philippines, Cambodia and Mongolia in their home countries. The content, however, is limited to how foreign women can adapt to Korean society and women’s roles in Korean families.

“We are trying to consult with the Justice Ministry to improve the institution regarding marriage migrants’ residency status (tied to Korean spouses),” said an official from the Gender Ministry.

“We are also receiving feedback from human rights organizations to improve the protection of marriage migrants’ rights and make our education programs for marriage migrants more in line with a gender equality perspective.”

The ministry operates counseling centers for marriage migrants abused by Korean spouses in Incheon, Daegu and Chungju, North Chungcheong Province. Another will open in South Jeolla Province before September.

It also runs the Danuri Helpline for multicultural families and 28 emergency shelters for migrant women across the country.