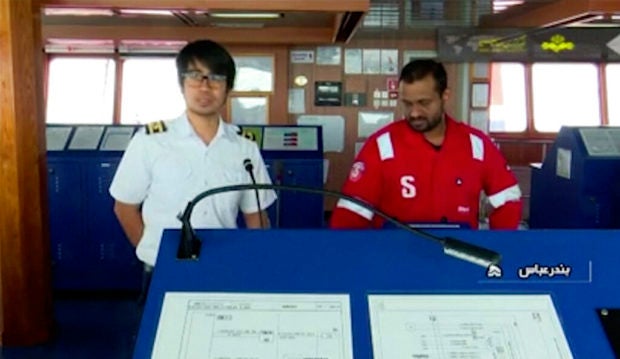 Members of the crew of the British-flagged tanker Stena Impero are seen manning the ship that was seized by Tehran in the Strait of Hormuz on Friday.  (IRIB News Agency via AP)

The 23 crew members of a UK-flagged ship captured by Iran in the Strait of Hormuz five days ago were all safe, the shipping company said.

Stena Bulk, the owner of the ship, said the ship’s master advised “that everyone was safe with good cooperation with the Iranian personnel onboard.”

The company said it made first contact Tuesday evening with the crew since the ship’s seizure by  Iran’s Islamic Revolutionary Guard Corps Friday.

The Stena Impero, a British-flagged oil tanker, has a 23-man crew composed of a Filipino, 18 Indians, three Russians, and a Latvian.

Iranian state TV aired video of the crew onboard the vessel off Iran’s port of Bandar Abbas earlier this week.

Philippine Ambassador to Iran Fred Santos said over the weekend the embassy was contacting Iranian authorities to seek assurance that the Filipino seafarer was safe and would be released soon.

The Filipinos account for 30 percent of the world’s seafaring population. With The Associated Press