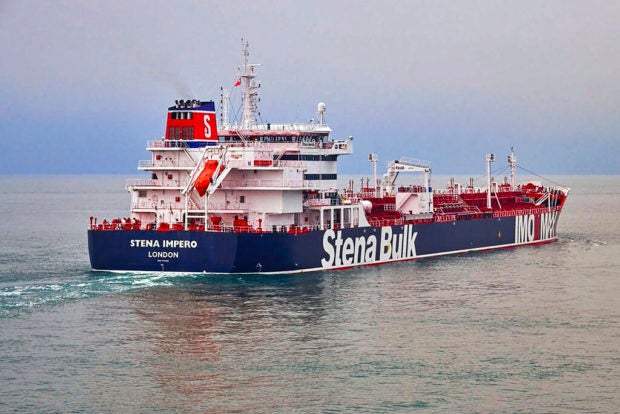 In this undated photo issued Friday July 19, 2019, by Stena Bulk, showing the British oil tanker Stena Impero at unknown location, which is believed to have been captured by Iran. Iran’s Revolutionary Guard announced on their website Friday July 19, 2019, it has seized a British oil tanker in the Strait of Hormuz, the latest provocation in a strategic waterway that has become a flashpoint in the tensions between Tehran and the West. AP

MANILA, Philippines — The Department of Foreign Affairs (DFA) on Saturday said a Filipino was among the 24 crewmen of a British-flagged, Swedish-owned oil tanker that was seized at the Strait of Hormuz by Iranian authorities on Friday evening.

In a statement, the DFA said it was actively monitoring developments on the incident involving MT Stena Impero, which was manned by 18 Indian, three Russian, one Latvian and one Filipino crew.

According to DFA Undersecretary for Migrant Workers Affairs Sarah Lou Arriola, the manning agency said there were no reported injuries and the vessel was anchored off the port of Bandar Abbas with all its crew on board.

The DFA said Philippine Ambassador to Iran Fred Santos was contacting Iranian authorities to seek assurance that the Filipino seafarer is safe and will be released soon.

The Philippine-based manning agency immediately informed the Filipino seafarer’s next of kin, and was providing the necessary assistance, the DFA said.

“All its 23 crew members will remain on the ship until the probe is over,” Allahmorad Afifipour was quoted as saying by Iran’s Fars news agency.

But the tanker’s operator Stena Bulk said on Friday the tanker had been “in full compliance with all navigation and international regulations” but it was no longer under the crew’s control and could not be contacted.

The vessel was heading to a port in Saudi Arabia and suddenly changed course after passing through the strait at the mouth of the gulf.

The seizure occurred after the British navy seized Iran’s Grace 1 tanker in Gibraltar on July 4 on suspicion of smuggling oil to Syria in breach of EU sanctions. —With a report from the wires

As world is on edge over COVID-19, it’s ‘business as usual’ for China in West Philippine Sea