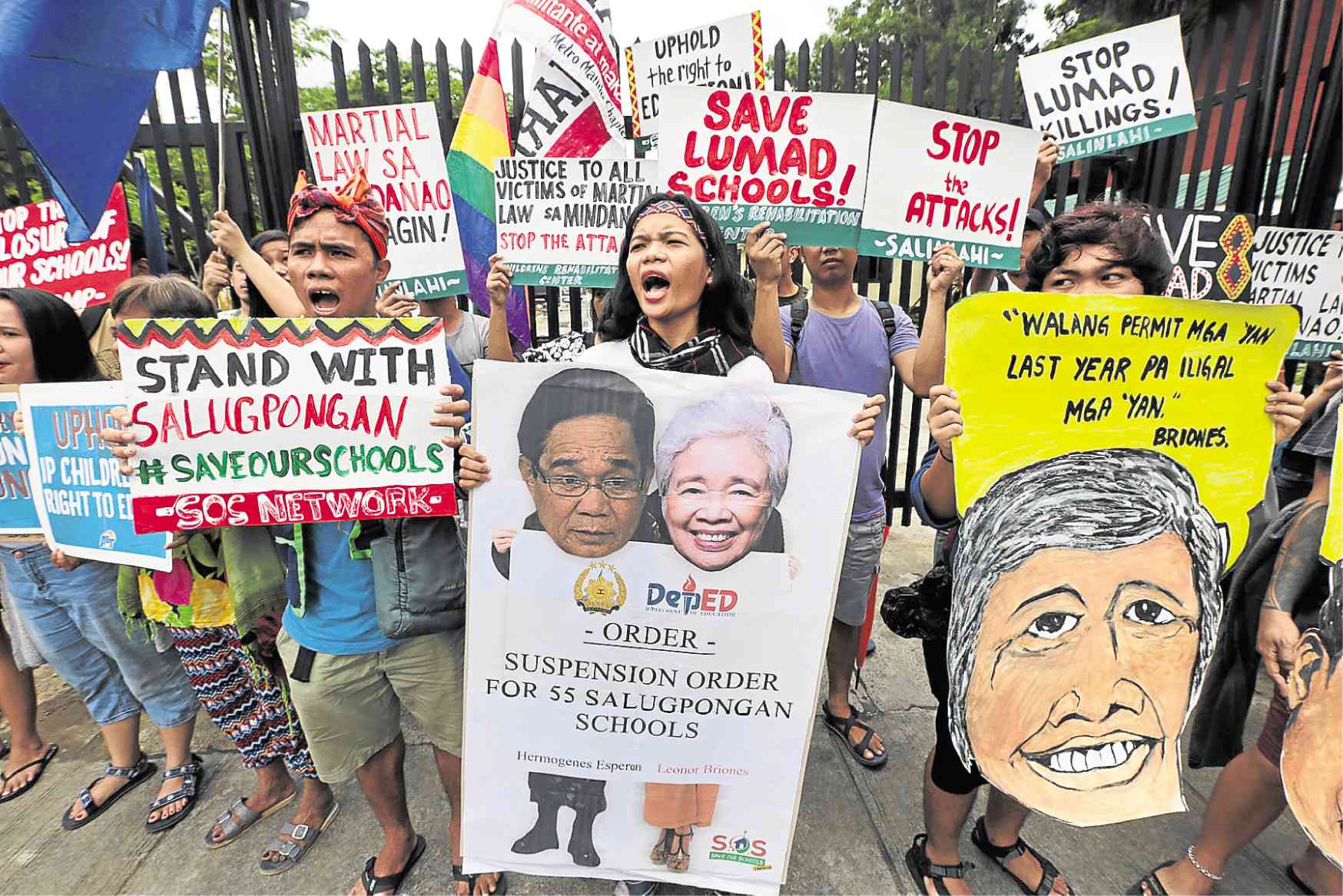 CONDEMNATION Members of Save Our Schools network stage a protest at the Department of Education office in Pasig City on Wednesday to condemn its order suspending the release of permits of 55 “lumad” schools in Mindanao. —GRIG C. MONTEGRANDE

MANILA, Philippines — A network of children’s rights advocates urged the United Nations on Wednesday to probe the violations of indigenous peoples’ rights in Mindanao, where they said more than 80 schools had been forcibly shut down since President Rodrigo Duterte assumed office in 2016.

The United Nations must step in, said Save Our Schools (SOS) lead convener, Eule Bonganay, because the President’s supermajority in Congress could not be relied on to investigate the recent Department of Education (DepEd)-ordered suspension of 55 schools for “lumad” (indigenous peoples) children.

“By our count, before Duterte came into power, there were 215 lumad schools operating in Mindanao,” Bonganay said. “Immediately after he declared martial law [in 2017] and threatened to bomb the schools, the violations have spiked.”

More than 80 have had to close, purportedly due to the military’s encroachment of indigenous communities. SOS has said the soldiers have carried out a systemic assault on the schools, including destroying, burning and vandalizing facilities.

“Indigenous peoples’ rights are human rights. Education is a human right,” said Bonganay, arguing that the plight of the lumad fell within the scope of Iceland’s resolution at the UN Human Rights Council that called for a deeper look into the human rights situation in the Philippines.

The suspension orders amounted to disenfranchisement, he added, even though the DepEd had ordered Salugpongan to facilitate the transfer of lumad children to “nearby public schools.”

“The reason lumad schools exist in the first place is because these schools are so far,” Bonganay said. “It would take hours for a lumad child, walking under the scorching sun, and crossing rivers and mountains, to [reach school].”

Members of the network stormed the DepEd office in Pasig City on Wednesday to register their indignation at the suspensions, which, they said, were ordered before Salugpongan was given a chance to defend itself from Esperon’s allegations.