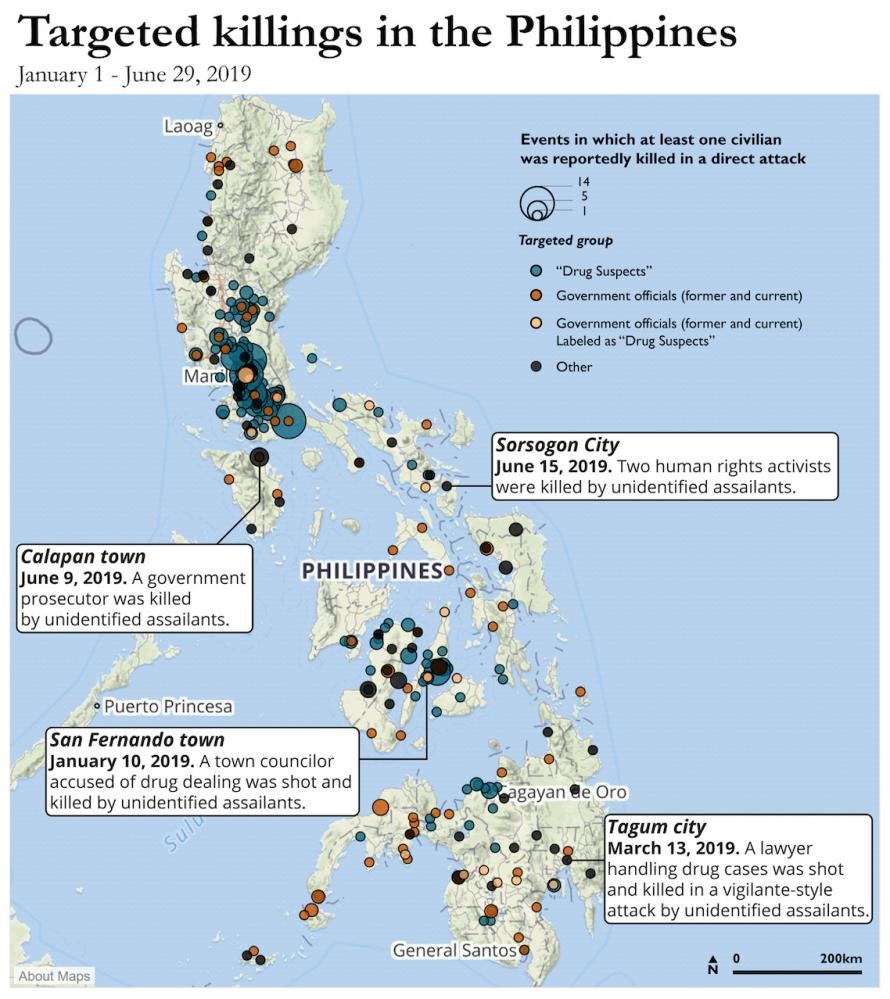 Map of targeted killings in the Philippines based on data and analysis by Acled. PHOTO FROM ACLED WEBSITE

MANILA, Philippines – The Philippines ranks high among countries where civilians are most unsafe as a result of what was described as “targeted attacks” arising from government policy, landing at No. 4 next to civil war-torn Yemen on a list of countries where violence against civilians is leading to rising casualty figures, according to a United States-based research and analysis group.

In an analysis, dated July 3, made by the group Armed Conflict Location and Event Data Project (Acled), the Philippines ranked fourth on the list of countries most dangerous for civilians largely because of Philippine President Rodrigo Duterte’s war on drugs which accounted for at least three-fourths of all civilian killings monitored by the group.

“The Philippines remains one of the most dangerous places in the world for civilians,” wrote Acled, which was established in 2014 and described itself as “the highest quality, most widely used, real-time data and analysis source on political violence and protest around the world.”

Acled said its new analysis “confirms that a wave of targeted attacks has resulted in the reported deaths of nearly 490 civilians” since the start of 2019 in the Philippines.

“President Rodrigo Duterte’s war on drugs has driven this violence, with alleged drug suspects accounting for almost 75 percent of this year’s civilian deaths,” it said.

“In addition to operations against drug suspects, political rivalries drive anti-civilian violence in the country as well,” Acled said.

“After drug suspects, government officials were the second most targeted civilian group in 2019, often targeted by their political rivals,” the group added, referring to dozens of political killings in the run-up to the May 13 elections.

Acled, however, said there’s been a thin line between drug war-related and political killings under Duterte.

“Sometimes, these two categories can be one and the same as opponents of the Duterte administration are routinely accused of involvement in the drug trade—and are subsequently targeted,” said the report.

According to the report, Acled has recorded over 450 ‘direct attacks targeting civilians resulting in nearly 490 reported fatalities since the start of 2019.”

At least 10 percent of the attacks on civilians, it said, was in the National Capital Region, including Metro Manila.

“State forces are responsible for nearly 60 percent of all civilian targeting events in 2019,” it said.

Attacks by unidentified groups accounted for 27 percent and “anti-drug vigilantes,” 8 percent. “These latter groups may be in fact linked to the state,” said the report.

It noted a coincidence between Duterte’s rise to power starting in 2016 and “more than half of political violence in the Philippines.”

In 2019, it said more than two-thirds of all political violence in the Philippines “thus far has consisted of violence against civilians.”

“Drug suspects account for almost 75 percent of reported fatalities from civilian targeting so far this year,” the report said.

“State forces have been the primary perpetrators of these attacks,” it said.

At least 18 percent of fatalities were former and current government officials with an estimated 90 dead. “These victims tend to be targeted by unidentified or anonymous groups that are often linked to their political rivals,” according to the Acled report.

However, it said drug suspects and officials were not the only civilians targeted by violence but also members of political parties, leftist organizations, land activists, farmers, lawyers and judges.

Read Next
In war of words over UNHRC probe, clarity is lost
EDITORS' PICK
DOH warns vs eating raw meat, exotic animals amid coronavirus outbreak
Get exciting deals and discounts when you download the new McDonald’s App
4 Ways Jollibee’s new store will serve a leveled-up kind of joy to Filipinos in the South
SM continues to send relief assistance to remote towns in Batangas
‘House of Kobe’ launched in Valenzuela City hours before hoops star’s death
In appreciation: Kobe Bryant, a life defined by hard work
MOST READ
College baseball coach, wife and daughter die in crash that killed Kobe
3 Chinese admitted to San Lazaro Hospital after showing signs of flu
Lack of witnesses prompts Makati Court to reset Trillanes’ rebellion trial anew
Kobe Bryant’s helicopter flew in fog that grounded other choppers
Don't miss out on the latest news and information.