Amnesty International to Panelo: Do your homework 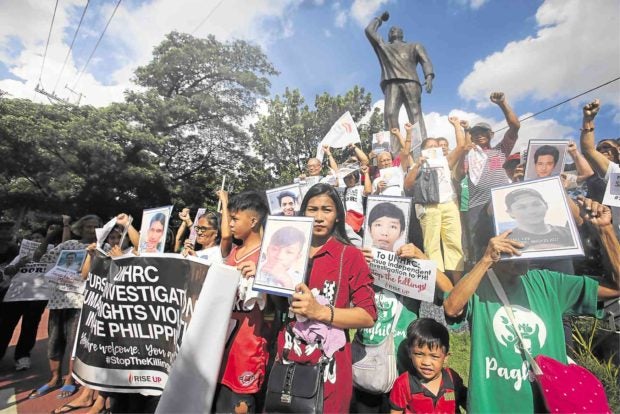 LET UN PROBERS IN Families who have lost loved ones in the war on drugs gather at the Commission on Human Rights compound in Quezon City on Tuesday to support international calls for a United Nations investigation of the killings and human rights abuses attributed to President Duterte’s brutal campaign against narcotics. —JOAN BONDOC

MANILA, Philippines — Amnesty International fired back at presidential spokesperson Salvador Panelo on Tuesday, a day after he accused the human rights monitor of politicizing the thousands of killings in President Rodrigo Duterte’s brutal war on drugs.

“We suggest next time before the honorable presidential spokesperson makes a response, he should at least do his homework first by reading our report,” said Butch Olano, Amnesty Philippines section director.

“Accusing Amnesty International of politicizing the issue of extrajudicial executions is just another way of muddling the Duterte administration’s accountability and its complicity in the gravity of this problem,” Olano said.

Panelo on Monday slammed the London-based human rights group as “incorrigible” for insisting on a United Nations probe of the drug war killings, saying the basis for its call for an international investigation was factually wrong.

But in an interview with the Inquirer on Tuesday, Olano said the government’s response was a template for countering opposition to abuses in the war on drugs.

“That has been their automatic response when this issue arises,” he said. “But our two reports belie their response and our reports are based on facts.”

Olano said the figures that Amnesty’s report had cited, which placed the extrajudicial cases at 27,000, came from the government itself, particularly from the Philippine National Police.

“Therefore we cannot produce the basis for any data that was made public by the PNP,” he said. “The burden of the proof is on the government.”

Amnesty released its second report on the drug war, “They Just Kill,” on Monday, a follow-up to a 2017 report that also investigated the killings and abuses in Mr. Duterte’s take-no-prisoners crackdown on illegal drugs.

Both reports underscored patterns that have defined the bloody campaign since 2016, including the repeated claims of the police that warranted the use of lethal force, the widespread use of drug “watch lists” that have turned into “kill lists,” and the reported abduction of civilians by plainclothes police.

The new report identified Bulacan province as the “new killing fields,” as opposed to the initial report that zeroed in on Metro Manila.

Amnesty cited the promotion and transfer of senior police officers that oversaw the bloody campaign in Metro Manila to Bulacan and the Central Luzon region as the reason for the sharp rise in deaths.

Gov. Daniel Fernando said the report saddened him but promised that the provincial peace and order council would look into the rights monitors’ findings.

“Based on our tally, we’ve had more peaceful [than fatal] arrests during our [antinarcotics] operations,” Col. Chito Bersaluna, Bulacan police director, told the Inquirer, without giving figures.

Police reports sent to reporters since January showed an average of three drug suspects killed in drug operations every month.

Gen. Oscar Albayalde, chief of the Philippine National Police, on Tuesday said international bodies and other countries should focus not only on the number of casualties in the drug war but also on the sincerity of the PNP in keeping the crackdown within legal bounds.

“We do not tolerate abuses [committed by] our people,” Albayalde told reporters. “We rebuke our own policemen. In fact, we even send them to jail if they make mistakes or commit abuses.”

Unlike its first investigation, Amnesty this time strengthened its call for an international investigation of the killings.

Despite Panelo’s claims that the Philippines’ own judicial system is open to investigate the cases, Olano said the prevailing fear amid a culture of impunity hindered victims to actually seek justice from local courts.

“The judicial system cannot begin unless there is a complaint from the family or affected member. Except this does not happen because the process cannot start in the first place because most of the victims are poor,” he said.

“Even if there is the Public Attorney’s Office, that office itself handles too many cases already,” he said, adding that seeking help from private lawyers, on one hand, would incur too much expenses.

“And in these cases where evidence is tampered with and there are no credible and real police reports because these all appear as templates, what can you use when you actually get to court?” Olano said.

Only one case of prosecution

The report noted that since 2016, there has been only a single case of prosecution related to the drug war killings, citing the high-profile case of 17-year-old Kian delos Santos in August 2017. Officers involved in his killing were caught on video dragging him away moments before he was shot.

Nicholas Bequelin, Amnesty’s regional director for East and Southeast Asia, said the government’s continuous effort to thwart any international investigation was consistent with Amnesty’s view that the Duterte administration had something to hide.

“If the government has nothing to fear, then it should welcome the investigation,” Bequelin told reporters on Monday.

Sen. Leila de Lima, detained on what she calls trumped-up drug charges for investigating the drug war killings, on Tuesday supported calls for a UN probe of President Duterte’s crackdown on narcotics.

In a statement, De Lima said the UN Human Rights Council (UNHRC) must look into the bloody campaign.

“While [Amnesty] has called Duterte’s war on drugs a ‘large-scale murdering enterprise,’ I labeled it a monstrous ‘killing machine’ whose continued rampage with almost no accountability within the national system requires the focus and concrete actions from such global instruments of justice as the UNHRC and the [International Criminal Court],” she said. —With reports from Leila B. Salaverria, Jeannette I. Andrade and Carmela Reyes-Estrope