MANILA, Philippines — Malacañang on Monday accused Amnesty International of “politicizing” the killings in President Rodrigo Duterte’s war on drugs after the London-based human rights monitor urged the United Nations to launch a probe into thousands of killings in the crackdown on narcotics.

In its report “They Just Kill,” its second since 2016 after Mr. Duterte launched his brutal campaign, Amnesty said targets, mostly poor people, are largely drawn from “drug watch lists.”

The names of those targets are supplied by local officials who are “under immense pressure” from police to provide a steady stream of suspects, it said.

“Worse still, individuals on watch lists appear to be placed on them indefinitely, with no means of getting delisted, even after they have gone through drug treatment or stopped using drugs,” it said.

Amnesty said it was impossible to determine how many people had been killed in the campaign, accusing the government of “deliberate obfuscation and misinformation” that had left victims’ relatives feeling helpless.

The group said the three-year-old campaign remained rampant and the scale of abuses had reached “the threshold of crimes against humanity.”

It urged the United Nations Human Rights Council to approve a resolution calling for an investigation into the killings in the Philippines, where it said there was now a “perilous normalization” of illegal executions and police abuses. 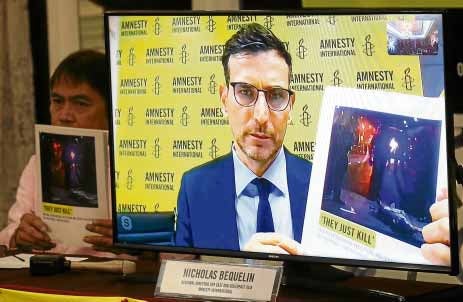 A vote on the resolution by the 47-member council is expected later this week.

Nicholas Bequelin, Amnesty’s regional director for East and Southeast Asia, said a UN-led probe was “urgently needed,” as the Philippine government had not shown any intention to seriously investigate the thousands of killings on a national scale.

“At the moment, it’s pretty clear that the Philippine government has nothing to show in terms of its genuine commitment to investigate this issue,” Bequelin told reporters at the launch of the report in Quezon City.

“The severity of this crisis is really something that demands a more forceful response from the international community that we have not seen so far,” he said.

Malacañang slammed Amnesty as “incorrigible” for insisting on a UN investigation of the drug war killings.

“It is incorrigible on their part to make that call. It keeps on calling for an investigation ever since, but the fact remains that the basis for their call is factually wrong,” presidential spokesperson Salvador Panelo said.

“The problem is this Amnesty International is politicizing the so-called extrajudicial killings in this country,” he added.

“There is bias, there is prejudice. So we’d rather have our own groups here protective of human rights here to help those who feel that there has been police abuse in the matter of police operation,” he said.

Panelo cited the Public Attorney’s Office overseen by the Department of Justice (DOJ) and the Integrated Bar of the Philippines, both of which he said offered free legal services to indigents.

But if no one would testify against them, the narcs should be presumed to have acted with regularity, Guevarra said.

No need for UN probe

The Philippine National Police maintained that a UN investigation into the drug war killings was unnecessary.

“The Philippines has a fully functional criminal justice system that has complete jurisdiction over such domestic legal questions that need to be resolved through a formal judicial process,” Police Col. Bernard Banac, spokesperson for the PNP, said in a statement.

Gen. Oscar Albayalde, the PNP chief, gave assurance that while the campaign against narcotics had been relentless, it stayed “within the bounds of the law.”

Albayalde said the Philippines did not need an international investigation because it had its own human rights protection agency, the Commission on Human Rights.

In 2017, President Duterte’s allies in the House of Representatives defunded the commission for criticizing the war on drugs, but relented after the President intervened and the Senate made clear it would restore the agency’s budget.

About 6,600 people, most of them accused of petty drug crimes, have been killed in the crackdown that the President launched at the start of his term in 2016.

But rights groups claim a much higher death toll, including many suspects killed by motorcycle-riding gunmen human rights monitors suspect were financed by police officers or were policemen themselves.

Panelo, however, maintained the government’s claim that the suspects resisted arrest and that the policemen just defended themselves.

If there were police abuses, rights groups should bring charges, he said.

The government would never act on calls for a UN investigation, he said, but Senate Minority Leader Franklin Drilon said the Palace should not ignore but respond to Amnesty’s report.

Amnesty “enjoys a certain degree of credibility insofar as the world stage is concerned,” Drilon said. “We must respond to these cases.” —Reports from Julie M. Aurelio, Jhesset O. Enano, Dona Z. Pazzibugan, Jeannette I. Andrade, Leila B. Salaverria, and the wires