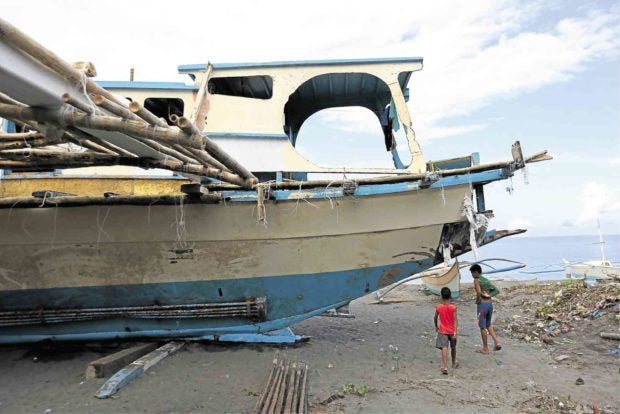 HIT AND RUN An official report by maritime authorities upheld accounts by the crew of the Gem-Ver 1 that they were abandoned in the water by a Chinese vessel that crashed into the rear section of their fishing boat in what has been described as a hit-and-run at sea. —RICHARD A. REYES

MANILA, Philippines — The government should file cases against the Chinese vessel that caused the sinking of the Filipino fishing boat Gem-Ver 1 and then abandoned its 22 crew members in the open sea, Sen. Sherwin Gatchalian said after details of an official report on the incident were made public on Saturday.

“The fact is very clear that they were left there and they almost died, and they didn’t receive help from the one who hit them … In other words, we need to get justice for our fishermen and use this report,” Gatchalian said in a radio interview.

The case could be filed in a Philippine court because the incident took place within the Philippines’ 370-kilometer exclusive economic zone (EEZ), he added.

According to the June 20 investigation report by the Philippine Coast Guard (PCG) and the Maritime Industry Authority (Marina) sent to President Duterte, the Chinese vessel that smashed into the anchored Filipino fishing boat not only failed to take measures to avoid hitting it but also willfully left the 22 Filipinos struggling for their lives in the water.

The Chinese vessel maneuvered back to about 50 meters from the stricken boat, a move which indicated that the Chinese crew had “direct knowledge of the distress situation,” the report on the June 9 incident near Recto (Reed) Bank said.

But instead of saving the crew of the Gem-Ver 1, the Chinese vessel turned off its lights and sailed away, it said. The Filipinos were rescued hours later by a Vietnamese fishing boat.

By this action, the Chinese vessel failed to provide assistance to distressed persons at sea in violation of regulations under the UN Convention on the Law of the Sea and the International Convention for the Safety of Life at Sea, the report said.

It said the incident happened about 259 kilometers northwest of Piedras Point in Palawan province, in “vicinity waters” of the Recto Bank and well within the Philippines’ EEZ.

It said the weather then was “fair with starry skies,” visibility “was slightly clear” and the sea was calm.

Gatchalian said he wanted to prevent a repeat of the incident, and this would be avoided if those involved would be held accountable.

“If they see that the government’s response is weak, if we won’t file cases or go after those who hit the fishermen, the incident will be set aside and it would be repeated,” he added.

The report did not say whether the Chinese vessel intentionally rammed Gem-Ver 1, calling the incident an “allision”—a ship hitting another that is stationary.

The Chinese vessel destroyed a portion of the stern of the Gem-Ver 1, causing water to flood its hull and sink the boat.

Sen. Panfilo Lacson said he was wondering if the joint probe conducted a forensic examination of the damage to determine whether the ramming was accidental or deliberate.

“If not, that explains why the report is inconclusive and incomplete in that regard. I would say, that should be an important aspect of the investigation,” said Lacson, a former national police chief.

The Joint Marina-PCG Marina Safety Investigating Team concluded, however, that in accordance with definitions set by the Code of the International Standards and Recommended Practices for Safety Investigation of a marine incident, that it was “a Very Serious Marine Casualty (event) due to the total loss of the ship.”

Mr. Duterte had dismissed the Gem-Ver 1 sinking as a “little maritime accident” and the result of a “miscommunication.” That has triggered criticism of his “soft” handling of the incident.

The PCG-Marina report only referred to the Chinese boat as “unidentified Chinese fishing vessel” and not the trawler Yuemaobinyu 42212 identified by the Chinese Embassy in Manila or a ship belonging to China’s maritime militia.

“Based on the description and drawing of the [boat captain], as corroborated by the rest of the survivors … it can be considered that the vessel that hit FB Gem-Ver is similar to the Chinese fishing vessels seen fishing in the area,” it said.

The report, however, said the Gem-Ver 1 and its crew were not compliant with some maritime and fishing regulations, chief of which was the failure to designate a lookout who “could signal an alarm of any approaching danger.”

The boat also had an unlicensed chief engine officer, carried more people than its authorized capacity and had an expired fishing and gear license and clearance certificate.

It said the crew reported maintaining anchor and white flashing lights, but the investigators could not determine whether their illumination was in accordance with the required intensity.

The report said the joint investigation was carried out to “make appropriate safety recommendations and/or adopt measures to prevent the occurrence of similar marine casualty and incident” and “not to seek to apportion or determine liability.”

The PCG and Marina recommended the formulation of a policy “defining the area of operation and safety standards for fishing vessels” and to keep reminding boat owners, operators and crew about regulations at sea.

It also suggested cooperation with the Department of Science and Technology to develop local and affordable navigation equipment, such as automatic identification systems and voyage data recorders.

The report also requested that the Chinese Maritime Safety Administration be asked to conduct its own investigation of the incident.

In response to the disclosure of the details of the PCG-Marina report, Foreign Secretary Teodoro Locsin Jr. said on Twitter on Saturday: “Its credibility is unimpugnable for being done and issued separately.”

“Let China make its case,” he said in a separate tweet.

“I reject any proposal for a joint investigation let alone joint conclusion needing Chinese officials coming over to investigate something done to us in our territory. Ping [Lacson] said, ‘Different if a Chinese was hurt.’ But no, we were hurt in our territory,” he added. —With a report from Jerome Aning