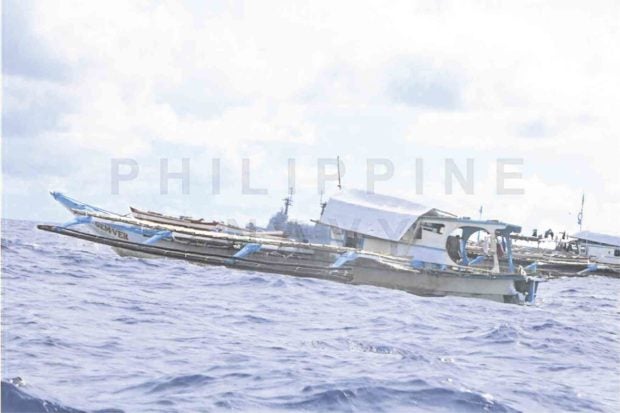 Photo shows the damaged fantail of the fishing boat Gem-Ver 1 after it was salvaged by Philippine Navy divers at Recto Bank in the South China Sea. The boat was hit from behind by a Chinese vessel on June 9, 2019. —PHILIPPINE NAVY PHOTO

MANILA, Philippines — The Chinese vessel involved in the June 9 Recto Bank incident in the West Philippine Sea failed to initiate steps to prevent the risk of smashing into a Philippine fishing boat anchored in the area, the official joint investigation report of the Philippine Coast Guard (PCG) and Maritime Industry Authority (Marina) has concluded.

INQUIRER.net obtained a copy of the report, which was sent to Malacañang on June 20. The report, “Joint PCG-Marina Marine Safety Investigation on the Incident Involving FBCA Gem-ver,” is composed of 13 pages, excluding annexes.

Based on Rule 18 of the Collision Regulations  — or Convention on the International Regulations for Preventing Collisions at Sea (Colreg) — power-driven vessels underway should keep out of the way of vessels not under command or vessels restricted in their ability to maneuver, the report explained.

The report also underscored the failure of the Chinese vessel to extend assistance to the 22 Filipino fishermen who were abandoned in the open sea.

The Chinese vessel “failed to take appropriate action to avoid the risk of collision and to render assistance to a vessel in distress,” one of the conclusions of the report read.

The Chinese vessel maneuvered back to about 50 meters from the stricken boat, a move which indicated that the Chinese crew had “direct knowledge of the distress situation,” the report on the June 9 incident near Recto (Reed) Bank said.

But instead of saving the crew of the Gem-Ver 1, the Chinese vessel turned off its lights and sailed away, it said. The Filipinos were rescued hours later by a Vietnamese fishing boat.

By failing to extend assistance, the Chinese vessel failed to comply with the regulations of the United Nation Convention on the Law of the Sea (UNCLOS) and the International Convention for the Safety of Life at Sea (SOLAS), which obliges masters of ships to provide assistance to the distressed persons at sea, the report stated.

It was not clearly established in the investigation whether the ramming was intentional or not, calling the incident an “allision” — a ship hitting another that is stationary.

The report categorized the incident as a “very serious marine casualty.”

“In accordance with the definition provided in the Code of the International Standards and Recommended Practices for Safety Investigation into a Marine Casualty or Marine Incident and the post-structural assessment, the Joint Marina-PCG Marina Safety Investigating Team concluded that the event is very serious marine casualty due to the total loss of the ship,” the report stated.

The Chinese vessel destroyed a portion of the stern of the Gem-Ver 1, causing water to flood its hull and sink it.

President Rodrigo Duterte previously dismissed the June 9 event as a “little maritime accident” and a result of “miscommunication,” triggering a backlash of his handling of the incident.

“Based on the description and drawing of the boat captain, as corroborated by the rest of the survivors… it can be considered that the hit FBca Gem-ver is similar to the Chinese fishing vessels seen fishing in the area,” it said.

But the Philippine fishing boat also had the following shortcomings, according to the report:

Richard Blaza, the cook of the Philippine boat and the one who first saw the approaching Chinese vessel, was technically not a look-out but was only awake to perform his duties as a cook.

“By not having or maintaining a designated look-out at the time they are anchored, no one could signal an alarm of any approaching danger,” the report read.

Blaza only “hastily awakened all the crews” when the Chinese vessel was about to hit their boat.

“According to all the crew, they were not able to jump off in the water because the said fishing vessel had already hit the aft portion of their FBca,” it said.

This means that the vessel was not compliant with Rule 5 of Colreg which obliges every vessel to have a proper lookout at all times.

The report also contained these findings:

Probe not aimed to determine liability

The joint investigation was carried out by fact-finding teams of PCG and Marina to “make appropriate safety recommendations and/or adopt measures to prevent the occurrence of similar marine casualty and incident” and “not to seek to apportion or determine liability.”

Because of the incident, the PCG and Marina recommended to formulate a policy “defining the area of operation and safety standards for fishing vessels” and to keep on reminding fishing vessels owners/operators and crew on regulations at sea.

It also called for improvements on the safety of fishing vessels and crew by requiring provisions for navigation and communication equipment, voyage data recorder, training and qualification for the crew of fishing vessels.

It also suggested cooperating with the Department of Science and Technology to develop home-grown technology to make navigational equipment such as automatic identification system and voyage data recorder affordable for fishing vessels.

The probe findings also requested that the Chinese Maritime Safety Administration conduct its own investigation of the incident.