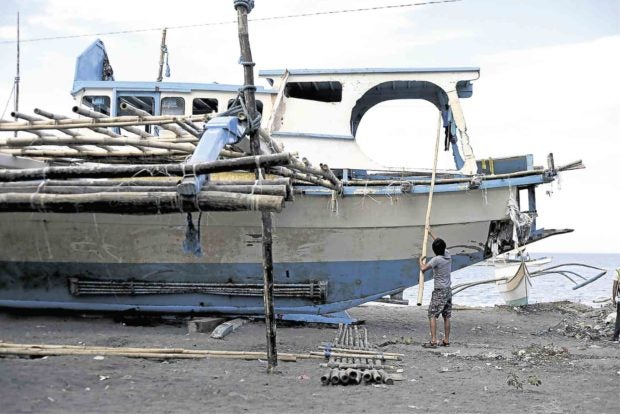 SALVAGED HULL The fishing boat Gem-Ver 1, which sank after it was hit on the stern on the night of June 9 by a Chinese trawler supposedly fishing at Recto (Reed) Bank, waters within the Philippines’ 370-kilometer exclusive economic zone in the South China Sea. —RICHARD A. REYES

The agreement between President Duterte and China’s President Xi Jinping allowing Chinese fishermen into the country’s exclusive economic zone (EEZ) is not only unconstitutional but also lopsided and could lead to a rapid drop in Philippine fish supply, according to Supreme Court Senior Associate Justice Antonio Carpio.

In a statement on Thursday night, Carpio said Foreign Secretary Teodoro Locsin Jr. was correct in saying there was no record of “the so-called verbal agreement” between the two leaders allowing the Chinese to fish at Recto (Reed) Bank and the Filipinos at Panatag (Scarborough) Shoal.

Carpio said such agreement must be rejected since Recto Bank lies within the country’s EEZ, where fish and other resources are reserved exclusively for Filipinos.

“This verbal agreement, aside from being clearly against the Constitution, is so lopsided it should be rejected by the Philippine government,” he said.

The 8,660-square-kilometer Recto Bank was so much larger than the 150-sq km Panatag Shoal, Carpio said.

Moreover, Filipinos are only allowed by the Chinese to fish outside the shoal’s lagoon, which is a much richer fishing ground. Chinese ships have guarded the entrance to the lagoon since China took control of the shoal in 2012.

Carpio also said China had the largest fishing fleet in the world. Filipinos, who only have wooden outrigger boats, cannot compete with its huge modern trawlers.

“The Chinese can deplete the fish in Reed Bank very quickly,” he said.

Locsin said in a television interview on Wednesday that he was not aware of Duterte’s supposed “verbal agreement” with Xi, which was purportedly made in 2016. In any case such a deal could not be enforced because it was not documented, Carpio said.

But presidential spokesperson Salvador Panelo insisted there was such an agreement and was already being implemented.

The dispute between Carpio and Malacañang over China’s incursions into the West Philippine Sea, waters within the country’s 370-kilometer EEZ, were rekindled following the June 9 ramming and sinking of a Filipino fishing boat near Recto Bank by a Chinese trawler, which abandoned the 22 Filipino crew members in the water.

Mr. Duterte played down the ramming, saying it was just an ordinary accident and that he didn’t want to go to war against China over it because the country would just lose.

Locsin, quoting a Coast Guard report, said the Filipino fishermen may be partly to blame for not assigning a lookout and not keeping their boat lighted in the dark.

Sen. Risa Hontiveros criticized the report as a “clear case of victim-blaming.”

“This report seems like it was ‘made in China,’” she said.

“We were the ones rammed, were not given help and abandoned to die in the middle of the sea by a foreign vessel that should not be in our territory. And yet we are the ones at fault?” Hontiveros said.

Former presidential spokesperson Harry Roque took a swipe at Carpio for criticizing the President’s agreement with Xi, saying “the once esteemed jurist has opted to join the fray of partisan politics.”

“Anything and everything that the President does is unconstitutional—that is in the mind of Justice Carpio,” he said. “The moral of the story: Beware of frustrated politicians in disguise as disinterested magistrates.”

In a Facebook post, Roque supported the Duterte-Xi agreement, saying it was “valid until China and the Philippines resolve [their] many territorial disputes.”

“Executive agreements and other lesser formal agreements may be oral in nature,” he added.

Roque said the Philippines as a sovereign country could share its EEZ with others if it wanted to.

But maritime law expert Jay Batongbacal disputed Roque’s position, saying that sharing fishing rights with the Chinese would mean renouncing Manila’s victory over Beijing at the international arbitral tribunal, which invalidated China’s historical claims over nearly all of the South China Sea, and was tantamount to “a recognition that China has valid claims within the nine-dash line.”

He told the Inquirer that waiving exclusive right to fish in the EEZ “ignores the fact that the decision to not share” was imbedded in the Constitution.

Batongbacal also dismissed the validity of any executive agreement between Duterte and Xi.

“An executive agreement per jurisprudence is one that implements prior treaty or existing law or policy. There is no treaty to share the EEZ, and certainly no law allowing it either,” he said. —WITH A REPORT FROM JULIE M. AURELIO AND PATRICIA DENISE M. CHIU

Read Next
Pimentel urges gov’t to look into increased Chinese presence in WPS
EDITORS' PICK
DILG to stranded workers: ‘Stay where you are’ until Luzon-wide quarantine is over
BREAKING: 1,075 people in PH has coronavirus disease – DOH
Style and music journeys with Claudia Barretto
UP-PGH wards for COVID-19 patients finished in 5 days
IATF: Food firms to operate with 50% of workforce during Luzon quarantine
Cebu City closes its borders
MOST READ
Pacquiao to seek probe on leaked private letter from Barangay Dasmariñas
Tootsy Angara bares neighbor wanted them out of village
All 3 COVID-19 positive patients in Bicol sent home
BREAKING: 1,075 people in PH have coronavirus disease – DOH
Don't miss out on the latest news and information.