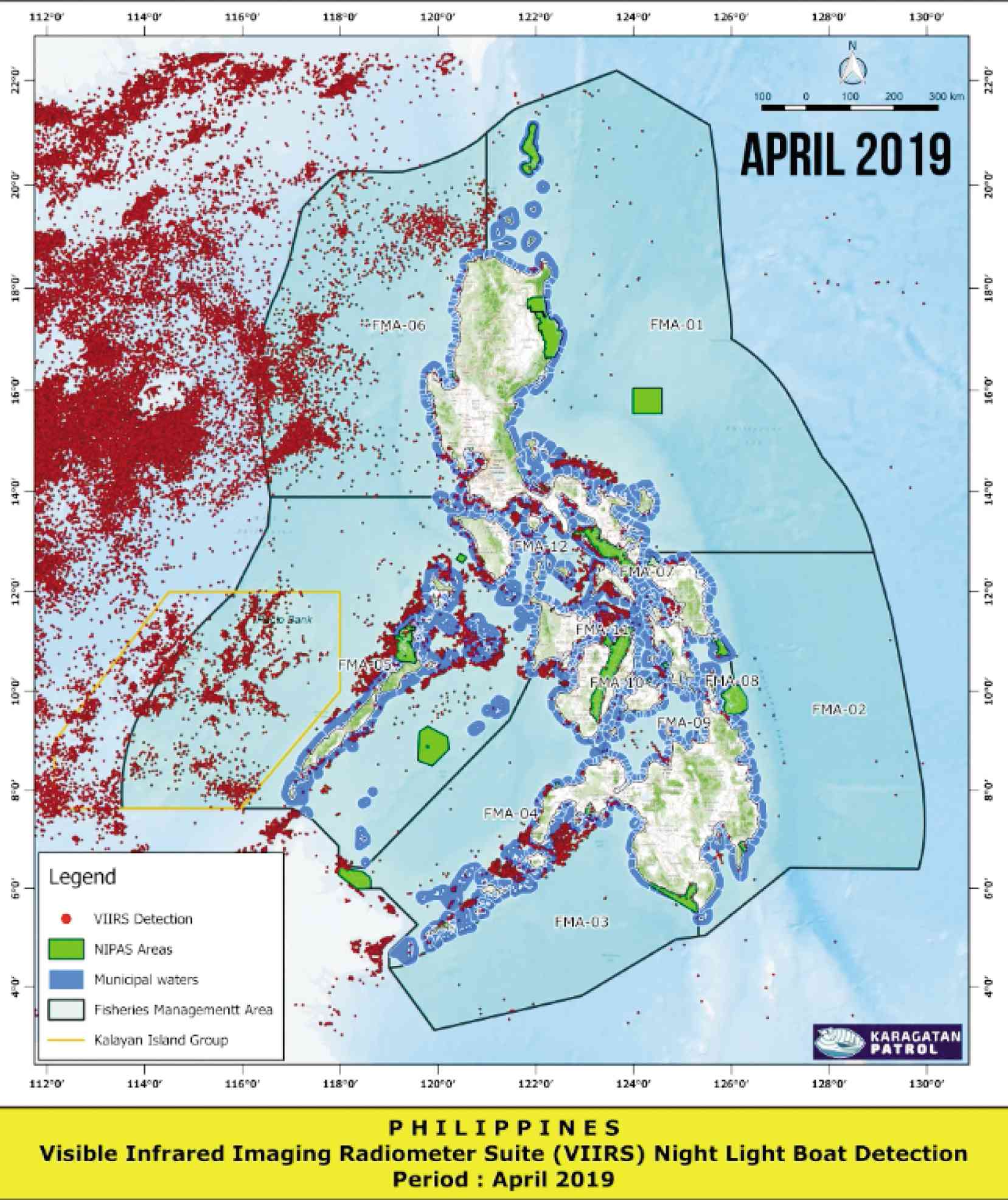 APRIL COUNT Karagatan Patrol has been watching the increase in number of foreign vessels in the West Philippine Sea every April since 2012, counting an average of 11,261 vessels in the two fisheries management areas in those waters—Recto Bank in the Kalayaan Group and Panatag Shoal, both rich in high-value fish and other marine resources.

More and more foreign commercial fishing vessels have entered the Philippines’ fishing grounds, including its municipal waters, in the past few years, threatening depletion of the country’s marine resources if their activities remain destructive and unchecked, maritime experts warn.

Data gathered through the Visible Infrared Imaging Radiometer Suite (VIIRS) and analyzed by the fisheries monitoring group Karagatan Patrol showed a dramatic increase since 2012 in the number of industrial-scale vessels in the West Philippine Sea, waters within the country’s 370-kilometer exclusive economic zone (EEZ) in the South China Sea.

More ships are seen inching toward the country’s coastline, with many already encroaching on municipal waters off the provinces of Palawan, Zambales and Mindoro.

While the identity of the vessels cannot yet be ascertained, experts agree that the majority could be coming from China and other countries like Vietnam and Taiwan, where maritime enforcers have previously arrested crews for poaching and other illegal activities in Philippine waters.

The weakness of the government’s vessel monitoring capability and the lax enforcement of laws on the country’s own  waters are to blame for the presence of these foreign vessels in the Philippine EEZ, also the designated fisheries management areas, the experts said.

With massive encroachment on Philippine waters, local fishermen and coastal villages suffer the most, according to Jessie Floren, Karagatan Patrol geographic information expert.

“The municipal waters are for marginalized fisherfolk who cannot afford to go to deeper seas,” Floren said in an interview on Thursday. “With the entry of these foreign commercial vessels in these areas, the impact would not only be on certain individuals, but on entire communities dependent on marine resources.”

Under the Fisheries Code, municipal waters are areas within 15 km from the coastline, including offshore islands.

Only fishing boats weighing less than 3.1 gross tons and using passive gears, such as hook and line, are allowed in these waters. 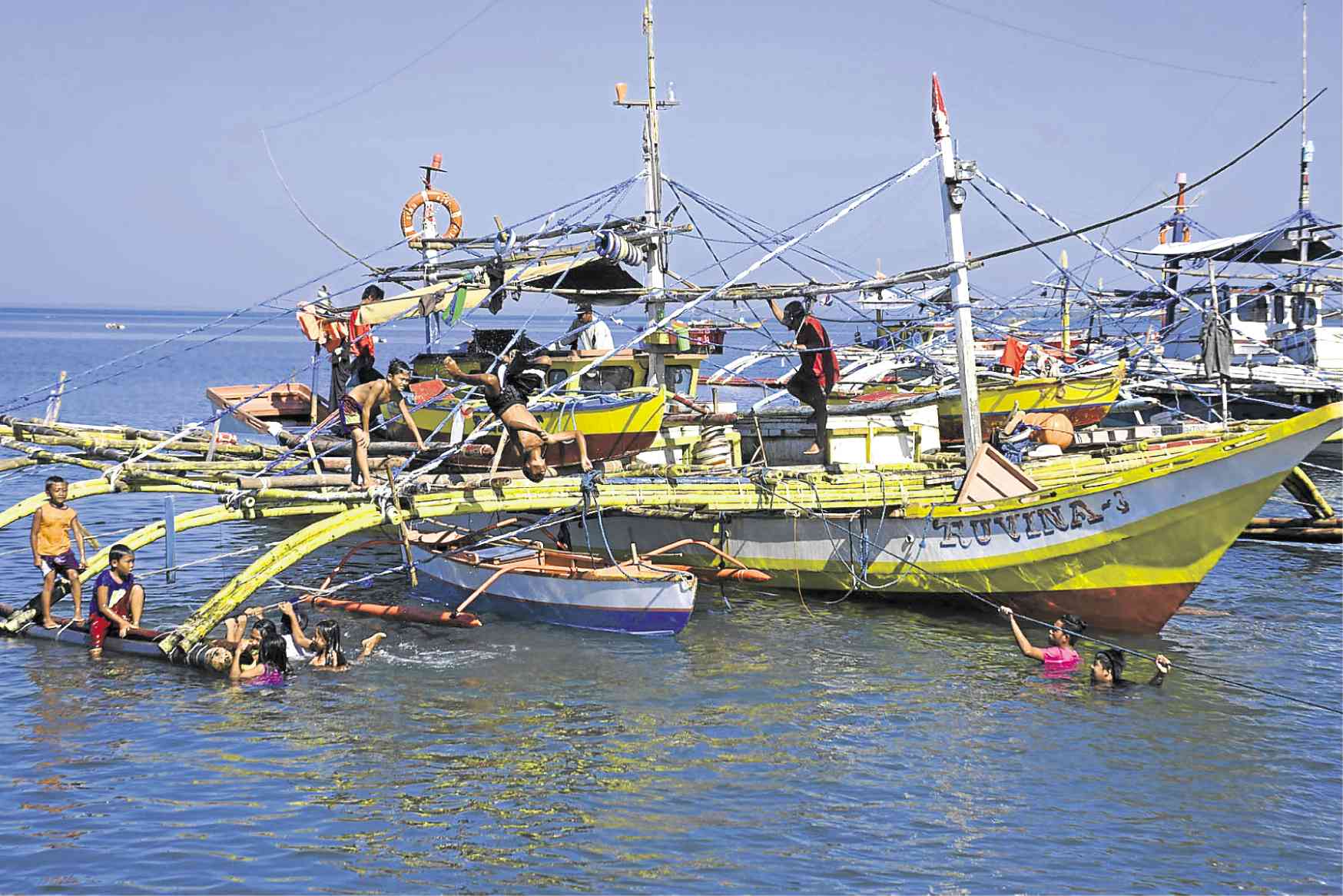 OLD TECHNOLOGY Big foreign vessels boast better technologies than those used by Filipino fishermen, many of whom still use traditional fishing methods. The Chinese vessels have bright lights that can be detected by a sensor aboard a weather satellite. -WILLIE LOMIBAO

But data analyzed by Karagatan Patrol showed rampant commercial fishing in these areas, including waters off northern and western Palawan and  the Zamboanga Peninsula.

Beyond its primary use for weather monitoring, VIIRS—a sensor aboard a weather satellite—detects night lights both on land and on water.

Using an algorithm developed by the Earth Observation Group of the US National Oceanic and Atmospheric Administration, it can also detect “lure lights” or “superlights” that huge vessels use to attract fish.

Karagatan Patrol collated the data every April, from 2012 to 2019, choosing that specific month when cloudless skies offer sharper images.

The maps clearly show that foreign vessels have grossly overpopulated the biodiversity-rich West Philippine Sea since 2012, with high concentrations around the Kalayaan Island Group and off the coastlines of provinces facing the western seaboard.

“Small-scale fishing boats cannot be detected because their lights are very small,” Floren said. “These are really commercial, if not industrial scale, fishing activities.”

Data provided by Karagatan Patrol to the Inquirer showed that an average of 11,261 commercial fishing vessels had been detected every April from 2012 to 2019 in the two fisheries management areas in the West Philippine Sea.

These areas include Recto (Reed) Bank in the Kalayaan Island Group and Panatag (Scarborough) Shoal, both rich in high-value fish and other marine resources.

A monthly count in April 2017 alone showed as many as 14,852 fishing vessels in these areas, with more than 10,600 commercial ships in waters off Palawan and around the Kalayaan Islands.

On a daily basis, more than 350 vessels are detected by the sensor in these waters.

These are conservative figures, Floren said, as each dot plotted on the maps can represent more than a single vessel in a 25-hectare area.

The dizzyingly high volume of commercial vessels in the West Philippine Sea, including those in the country’s fishing grounds, can lead to the collapse of fish species due to overfishing and destructive fishing methods, such as bottom trawling and the outright destruction of coral reef ecosystems.

While all big boats should have automatic identification systems (AIS), Floren said the majority of those spotted in the West Philippine Sea did not have these.

Some have been stationary for a long time, he said.

But maritime law expert Jay Batongbacal said on Wednesday that even without the particular identification, there was high likelihood that many of these were Chinese vessels, which had been repeatedly spotted by local fishermen.

The big foreign commercial vessels boast better technologies than those used by Filipino fishermen, many of whom still use traditional fishing methods. The Chinese vessels have bright lights that can be detected by VIIRS.

Floren noted that similar strong lights were also seen in the sketch by the Filipino fishermen of the Chinese vessel that hit and sank their boat at Recto Bank on June 9.

“We also have a moratorium on the issuance of commercial fishing vessel licenses since 2014, so technically our number of fishing vessels had not increased since then,” said Batongbacal, director of the University of the Philippines’ Institute for Maritime Affairs and the Law of the Sea.

“That’s precisely because we have a policy to either maintain or reduce our catch capacity. So we are not the ones who are increasing in number in the West Philippines Sea,” he said. “Our commercial fishing has been relatively stagnant since 2014, compared to the Chinese’s production that has been going up.”

Floren said the current situation in the West Philippine Sea should push the government to beef up its monitoring, control and surveillance of vessels entering Philippine waters.

The Bureau of Fisheries and Aquatic Resources (BFAR) has a vessel monitoring measure, but Floren said this was not enough to cover all areas.

He also said the bureau should exercise transparency in its monitoring.

“They should be transparent with their work to the public, because right now, only the BFAR can access those information,” Floren said.

Left unchecked and unregulated, massive-scale fishing can ultimately imperil the lives of communities reliant on the resource-rich West Philippine Sea.

Illegal fishing and reclamation at Panatag Shoal and the Spratly Islands alone cost the Philippines some P33.1 billion annually, according to marine scientists.

Destruction of coral reefs, which are important nesting areas and habitats for fish, can adversely impact fish supply from the West Philippine Sea, which is part of the Coral Triangle region, the center of the world’s marine biodiversity.

But the destructive and excessive exploitation of resources in these waters would impact not only the Philippines, but also the entire Southeast Asian region, Floren said.

“If we continue to degrade the quality of our resources there, especially the coral reefs, it will aggravate the condition of marine-based production in the Asean region,” he said.