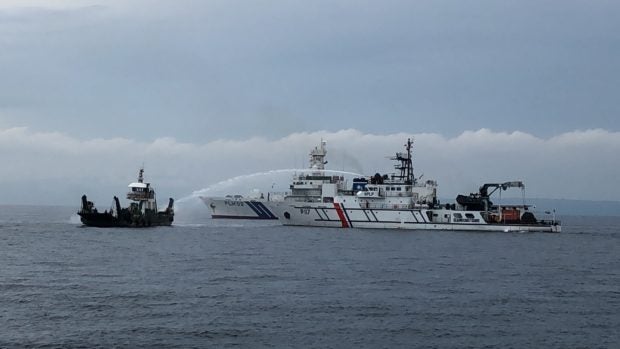 The coast guards of the Philippines, Japan and Indonesia stage an exercise to prepare for possible large-scale oil spills in the region. PHOTO by Frances Mangosing/ INQUIRER.net

DAVAO CITY — The coast guards of the Philippines, Japan, and Indonesia are currently holding a military exercise to prepare for a possible large-scale oil spill.

Seven ships and one fixed-wing aircraft from the Philippine Coast Guard, three oil spill response, search and rescue vessels from Indonesia, and one Japanese Coast Guard vessel with a helicopter are participating in the five-day Marine Pollution Exercise (Marpolex) from July 1 to 5 in Davao Gulf.

Wednesday’s event was the highlight of the entire exercise. The participants responded to a vessel fire at sea, search and rescue of victims, and eventual oil spill.

Observers from Bangladesh, the US, Vietnam, and China coast guards joined to witness the exercises.

“We are inviting them to develop more comprehensive cooperation on oil spill response,” Hermogino said.

The Marpolex is a biennial exercise held since its establishment in 1986. It is a commitment of the Philippines, Indonesia, and Japan in the implementation of the Asean Oil Spill Response Action Plan and the Sulawesi Oil Spill Network Response Plan.

While they have been doing it for years, Hermogino said there is still a lot of work to be done.

“There’s still more improvement to make. The purpose of it is to compare notes based on respective operational protocols. There will be changes on how these agencies perform,” he said.

He noted that compared to its counterparts, PCG is still using manual techniques during the oil spill and needs to keep up with its neighbors.